Wisconsin hemp farmers hope to cash in on controversial crop 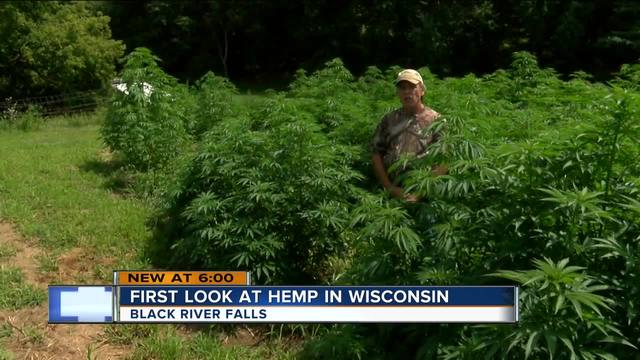 Some of the first legal hemp plants are now being grown in Wisconsin, and farmers are hoping customers will soon follow.

At a Monroe County farm, Jeff Noble’s crop is already over seven feet tall – just two months into the growing season. The lush field of green tucked away on his 40-acre plot of land may look unfamiliar. That’s because it’s the first Wisconsin hemp growing season in more than 75 years.

“I always hoped I would be [growing hemp,] and I’m glad to say I got on board the first year,” Noble said.

Noble purchased around 1,500 hemp seeds from Colorado to cash in on the crop — but it hasn’t all been easy.

“You have to apply with a fee, and be specific as to where you’re planting it in the fields,” he said. “They came, they took some sampling.”

Over in Black River Falls, Priceland Hemp owner Joel Peterson has had even more challenges as the first CBD oil shop in the state. The Wisconsin Attorney General, Brad Schimel, sent him a cease and desist letter back in May.

“We’re in full compliance and we always were,” Peterson said.

Schimel has since walked back that stance. The Wisconsin Farm Bureau Federation tells TODAY’S TMJ4 that’s because he didn’t fully realize the scope of what Wisconsin’s hemp pilot program allows – from seed to sale.

“These were planted the end of May, and we have 100 plants in here,” Peterson said.

Peterson plans to do all of that under one roof with an indoor grow operation. He hopes his indoor crop cashes out somewhere between $30,000 to $40,000.Â