Why More College Students Are Calming Anxiety With Medical Cannabis 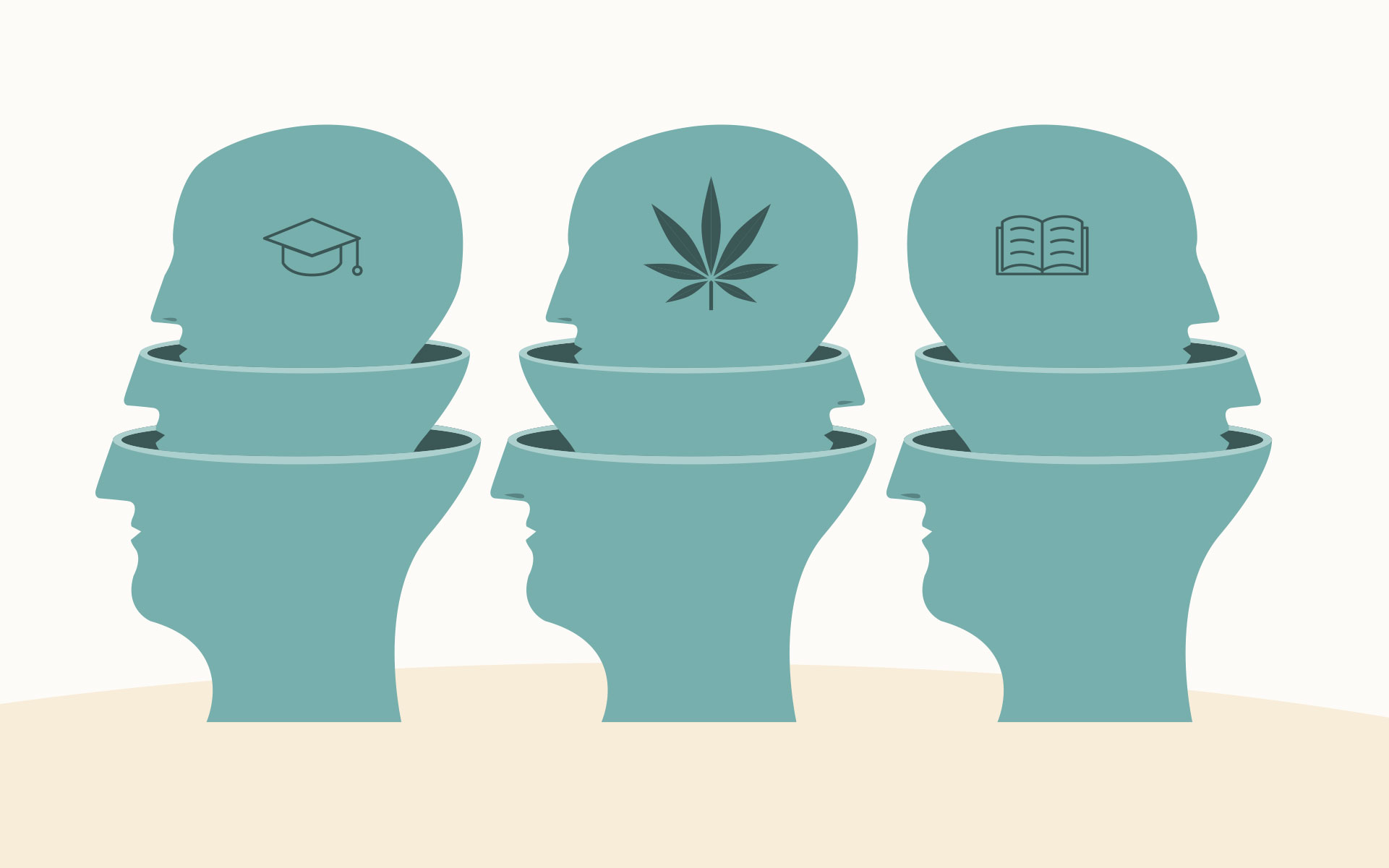 Brianna is a model of academic excellence. Not only is she about to graduate from college, sheâ€™s already working for a women-owned engineering firm. Sheâ€™s outgoing and social, and comes from a close-knit family. Despite what appears to be a charmed life, though, Brianna was recently diagnosed with anxiety disorder, and prescribed an antidepressant.

1 in 4 college students take antidepressants, but students who use medical cannabis often report that their clinicians disapprove.

Sarah, a 25-year-old nursing student and mother of two, finds herself in a similar situation. Sheâ€™s currently transitioning from a selective serotonin reuptake inhibitor (SSRI) to CBD to treat her anxiety. Cannabis, she says, â€ścalms me down and helps me get through most of my day without having a breakdown. I have several panic attacks daily if I donâ€™t use [it].â€ť When she does, she reports, â€śI might only have one a day.â€ť

In my work as a mental-health speaker, I primarily give presentations at colleges and universities. I always ask my audiences which mental illnesses are most prevalent among themselves and their peers. Overwhelmingly, their answer is anxiety.

A New Openness on Campus

The National Alliance on Mental Illness (NAMI) reports that one in four young adults between the ages of 18 and 24 have a diagnosable mental health disorder, with anxiety and depression being the most common.

Students now speak much more openly about their mental-health issues than they did when I was in college in the 1990s. Back then, I was afraid someone I knew would see me going into the university psych center. I scheduled my appointments for as late in the afternoon as possible so there would be fewer students on campus.

Today, clinicians at college counseling centers tell me theyâ€™re overwhelmed with students seeking help. And yet a certain amount of stigma still remains. In this article, for example, Iâ€™m not using the last names of a number of patients in order to protect their identities. That probably wouldnâ€™t be the case were they suffering from, say, a common physical disorder.

According to the American Psychological Association, 25 percent of college students take psychiatric medications such as antidepressants and mood stabilizersâ€”but students who use medical cannabis often report that their clinicians disapprove.

Physicians Donâ€™t Want To Discuss It

Physicians and therapists tend to be averse to any discussion of medical cannabis. They may have reasons based in law (cannabis remains a federally illegal substance), or in their own self interest (those who have a DEA license to prescribe drugs donâ€™t want to put it at risk). Most are aware of the studies that indicate young people with a family history of schizophrenia may be at greater risk of experiencing a psychotic break triggered by cannabis.

But that resistance to discussing the use of medical cannabis is itself a problem.

‘My therapist is highly against smoking marijuana. She says that it contributes to my problems, but she has no idea how much I used to suffer before.’

It causes some students to drop out of therapy, or to avoid seeking it in the first place. Avoidance comes at great cost: Chadron State College in Nebraska reports that 64 percent of American students who drop out of college do so because of declining mental health. The most common diagnoses among those who drop out are depression, bipolar disorder, and PTSD.

Art student Lindy suffers from the latter, but sheâ€™s one of the fortunate ones. Sheâ€™s still in school, and she credits cannabis for her ability to stay there. Lindy has a diagnosis of borderline personality disorder, and has tried psychotropic medication to help with her symptoms. The negative side effects, however, made them extremely difficult to take. â€śThe last meds that were prescribed to me caused permanent nerve damage to my foot,â€ť she told me. Lindyâ€™s therapist, she says, is â€śhighly against smoking marijuana; she says that it contributes to my problems, but she has no idea how much I used to suffer before.â€ť

Stigma, Not Cannabis, Is the Problem

As more states legalize the medical use of cannabis, and some allow the regulated use of adult-use marijuana, the attitude among some mental health clinicians is finally starting to change. Some are beginning to embrace cannabis use because they recognize that the stigma may be inhibiting access to effective treatment.

Barbara Blaser is a registered psychiatric nurse who worked for the Illinois Department of Mental Health and Developmental Disabilities for 30 years before moving to the Bay Area to be closer to her family. Her daughter, Debby Goldsberry, is the executive director of Magnolia Wellness in Oakland, one of the cityâ€™s foundational cannabis dispensaries.

When Blaser suffered a serious illness in 2014, Goldsberry convinced her to try cannabis. After experiencing for herself the relief it can bring, she began working at Magnolia herself. Today sheâ€™s the companyâ€™s Director of Clinical Services, a role that enables her to counsel patients seeking medical marijuana. â€śI believe that cannabis offers hope for people living with a mental illness,â€ť she says. â€śI think, in particular, people with anxiety disorders can be helped.â€ť

When patients walk into Magnolia seeking cannabis for mental-health issues, Blaser first refers them back to their mental health treatment team to get a HIPPA waiver, which allows her to talk to their providers. â€śI am comfortable working with a patient who wants to wean off Trazodone,â€ť an antidepressant often used to treat sleeplessness, â€śbut if they have been on a treatment regime, I want their team involved,â€ť she says. â€śMental health treatment is more than just medication.â€ť Blaser canâ€™t recommend specific strains for specific diagnoses without putting her license at risk, but she can suggest strains known to help relieve certain symptoms.

One student turns to Lemon Haze during panic attacks. ‘It allows me to slow down the spiraling thought process, come into focus with the issue, and address it in a more strategic way.’

Indeed, the students I interviewed who lived in legal states had strong strain preferences. Those who suffered from depression preferred sativas, while those with anxiety preferred indicas (but frequently used sativas during the day).

Brianna, whoâ€™s transitioning off her SSRI antidepressant under medical supervision, relies on Lemon Haze during panic and anxiety attacks. â€śIt allows me to slow down the spiraling thought process, come into focus with the issue, and address it in a more strategic way.â€ť

DJ, an education major who lives in a legal state, discontinued traditional psych meds when they didnâ€™t adequately treat his symptoms. â€śCannabis has played a huge role in treating both my depression and anxiety,â€ť he says. DJ reports that San Fernando Valley OG, NYC Diesel, and Blue Dream are among the strains that provide the most relief. Purple strains, such as Purple Kush and Purple Urkel, donâ€™t work well for him.

The students who lived in legal states reported more successful symptom relief, due largely to the ability to choose their strains. Sarah, the nursing student, lives in a state in which cannabis is still illegal, but says her obstetrician suggested it when she could no longer take Xanax to treat her anxiety during pregnancy. â€śI canâ€™t weigh in on strains, because in an illegal state, you never know what you really get,â€ť she says. â€śBut when Iâ€™ve been able to know the strain I was smoking, I did prefer sativas. I felt they helped calm me more than just get me high.â€ť

While the students I interviewed unanimously reported anxiety and depression relief, some research indicates that cannabis may exacerbate the symptoms of psychotic disorders such as schizophrenia and schizoaffective disorder.

Cannabis medicine works in part because it fosters community, both directly and indirectly.

Because first-episode schizophrenia often occurs during the college yearsâ€”NAMI reports that the average age of onset is 18 in men, and 25 in womenâ€”it is crucial that students with psychotic disorders, or a family history of psychotic disorders, disclose this information when seeking medical marijuana recommendations.

More recent research has provided more depth and complexity to the schizophrenia question. A 2018 study published in the American Journal of Psychiatry found that patients given CBD-only cannabis medicine reported lower levels of positive psychotic symptoms, such as hallucinations, delusions, and racing thoughts.

No matter their diagnosis or symptoms, college students in legal states may find relief in the community services dispensaries offer, regardless of whether they ultimately choose to use cannabis. â€śI think for some, just knowing that someone like me is available to have a cup of coffee with is welcome,â€ť says Blaser. â€śWe can talk. No judgment. You donâ€™t have to buy anything. We can talk stigma, hygiene, hunger, sleep issuesâ€”sometimes that [support] is a missing piece of their lives.â€ť

The importance of community support for those with mental health disorders is the most profound lesson Iâ€™ve learned in my seven years of speaking and listening to college students. No psychiatric medication alleviates symptoms in a void. Connection with oneâ€™s peers is vital, especially when those peers struggle with the same issues.

Cannabis medicine works in part because it fosters community, both directly and indirectly. Smoking a joint is more enjoyable when you have someone to share it with, but sometimes medicating alone allows you to leave the house and participate in social events. Cannabis can help students with anxiety and depression make the friends who will ultimately keep them alive.

Gaining a Sense of Mastery

To his peers who want to try medical cannabis, DJ offers the best advice: â€śCannabis is able to help get symptoms under control without the slew of negative side effects of other meds, but must be treated like medicine. Becoming a burnout is not going to help you feel better, or advanceâ€¦the repeal of federal prohibition. Know your limit, and only use what you need to get through each situation.â€ť

This is what recovery from mental illness looks like: getting through each situation, one situation at a time, until you build what Marsha Linehan, the creator of Dialectical Behavior Therapy (which, incidentally, saved my life), calls â€śa sense of mastery.â€ť

For those of us who live with mental illness, the ultimate proof of a drugâ€™s efficacy is that it allows us to live with mental illness. If a medication helps keep you from killing yourself, itâ€™s effective. When therapists who work with college students validate their patientsâ€™ use of cannabis as a legitimate medication, they increase the likelihood those patients will return for more sessions. The more students seek help, the more they decrease stigma in their communities.

And the more we reduce stigma, the more people stay alive.