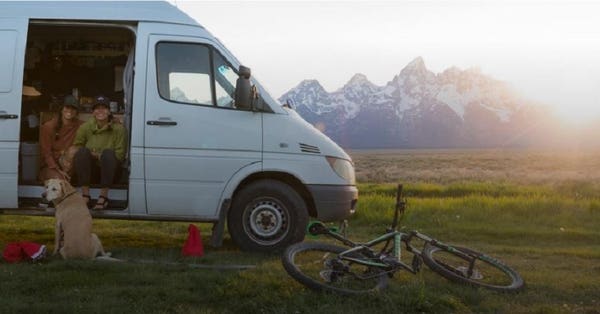 It all started with a dream to see more of the beautiful country in which we live. Liz Snyder and Rachel Wood currently live in a 2006 white, Sprinter van because they wanted to break free and travel the United States. They quit their Asheville, N.C.-based jobs and lives, turned their van into their home and are traveling the United States and Canada. To date, they‚Äôve been on the road for eight months.

Both Snyder and Wood independently dreamt of living life on the road, experiencing beautiful landscapes and recreating around the country. After hiking the Appalachian Trail in 2015, Snyder felt the most freedom she ever felt, and she knew she couldn‚Äôt return to ‚Äúnormal‚ÄĚ life. The travel bug bit Wood during an internship in Bend OR. After this life-changing experience, Wood says, ‚ÄúI just want to move and travel and see as many places as I can while I‚Äôm on this planet.‚ÄĚ

From their first time hanging out together, Snyder and Wood knew they had a mutual dream of travel, and travel has a big influence on their relationship. Woods says, ‚Äú Travel is a huge part of our relationship and probably what helped bring us together. ‚ÄĚ

Hear the ins and outs of how Snyder and Wood built a life on the road:

The glorious and bumpy road

Snyder and Wood have watched their parents work the 9-5 grind toward retirement. While they appreciate that kind of dedication, both feel ‚Äúthose retirement days‚ÄĚ are never promised and believe they can be both smart about their future and live their dreams in the present. Both feel the path isn‚Äôt the way they want to live. ‚ÄúIt‚Äôs important to find comfort in discomfort,‚ÄĚ says Snyder.

Both Snyder and Wood enjoyed their jobs and found them rewarding, but they grew tired of the routine and normalcy. They felt so comfortable they were stagnant. Snyder continues, ‚ÄúThere is another life out there for everyone. You just have to do it.‚ÄĚ

Both stayed at their full-time jobs until a few days before they hit the road. Many people today use the term ‚Äúside-hustle‚ÄĚ synonymously with second and third jobs. Snyder and Wood saw building out their van and preparing for life on the road as their side hustle. That side-hustle included finding their van, educating themselves on building out a van and charting their course out of Asheville.

Once they started, everything fell into place. ‚Äú Once you put your mind to something and that‚Äôs your goal, the universe follows along with you ,‚ÄĚ says Snyder. It took Snyder and Wood 11 months to go from inspiration to purchasing their van. It then took four months to build their van into their current home, which admittedly was a fast turn-around time for building out a van.

Both attribute their constant communication and checking in with each other while making their plans concrete for helping their relationship survive what could‚Äôve had adverse consequences. Every step of the way, from quitting their jobs to selling their cars, they checked in with each other to ensure neither had doubts about their unconventional plan.

‚ÄúIt‚Äôs very stressful, sometimes terrifying, to change your life, sell your things, leave your family and friends and move into a such a small (6-foot x 10-foot) space,‚ÄĚ Wood admits. It‚Äôs worth noting that both women are nearly 6-feet tall, and they have a full-grown Labrador Retriever on the road with them. Regardless, even when they were most scared or doubtful, they always came to the same conclusion; they wanted to fulfill this dream.

The biggest source of stress on their relationship through this experience was building out their van. The couple admits they had no building experience before assuming this task. Initially, Snyder and Wood only owned a hammer. For a birthday, they got drills and other tools to do their van conversion.

Aside from a few mistakes, their education cost them almost nothing. Snyder and Wood‚Äôs education came from YouTube and Instagram, though mostly from YouTube. They watched numerous van-build-out videos and adopted what they liked for their van. Many people who build-out vans showcase their progress on YouTube, which provides education to an audience who might do the same.

Because Snyder worked at Eagle‚Äôs Nest Camp and was required to essentially live on-site for three months each year, she was able to save about 40% of her annual income because both housing and food were provided by the co-ed residential camp. Knowing she would eventually be on some sort of adventure, Snyder saved her money for a few years prior to their departure.

Having $30,000 saved ‚Äď maybe having fewer beers when planning ‚Äď for this adventure would‚Äôve been great, although they never reached that number because they didn‚Äôt want to sacrifice their dreams waiting for ‚Äúthe perfect time.‚ÄĚ Neither has touched their retirement accounts, though they have tapped into savings, and they took out a small loan to buy their van.

The build of their van cost less than $3,000, which includes the plywood for their bed and a bathroom vanity purchased for $45 from a Habitat for Humanity restore. Everything else was self-made. Their solar setup cost $600 and their fridge cost $500.

Since they‚Äôve hit the road, their expenses have been nothing like living in an apartment or a house. They don‚Äôt pay utilities. They always camp at free sites or park in lots where it‚Äôs allowed. In their first six months, their net-costs were between $5,000 to $10,000. Both acknowledge they haven‚Äôt been terribly frugal, though.

Working on making the road work

They were dandelion pickers at the University of Colorado in Boulder, CO for $12 an hour for six weeks. That job came with free parking for added savings. In Oregon, they worked on an industrial hemp farm planting hemp to be used for CBD oil after growing and production. Most recently, they‚Äôve worked as gardeners at a private home. They‚Äôve augmented their income by being groundskeepers for Granite Gear.

Notably, Snyder and Wood have exchanged the traditional for the authentic. The couple has pared their lifestyles back as much as possible and redefined what comfort means to them in order to have their unique experiences. This disrupts many people‚Äôs paradigm of how life should be, and Snyder and Woods have felt condescension from others at times because of it.

People say, ‚ÄúYou‚Äôre farming? Is that what you‚Äôre doing for a living now?‚ÄĚ From their experience, living authentically, having the unique experiences they desire, requires a thick skin. ‚ÄúIt‚Äôs important to question society and whether its rules make you happy. It‚Äôs not about what we think we need or what others think we need but what we actually need,‚ÄĚ Wood says. ‚ÄúDoes your Apple Watch hug you at night and tell you, ‚ÄėI love you,‚Äô‚ÄĚ she concludes.

There‚Äôs not an app, yet, that gives hug and love, but a life spent living your dreams doesn‚Äôt need an app for that.