In the midst of the the Centers for Disease Control (CDC) investigation into the vaping-related health crisis, which has claimed 23 lives in the United States as of this week, media coverage of the epidemic has been virtually nonstop. Patients in more than two dozen states have been presenting at hospitals throughout the country with symptoms such as coughing, chest pain, and shortness of breath, as well as nausea, vomiting, and fever in some cases. What‚Äôs worse, Dr. Anne Schuchat, the principal deputy director of the C.D.C, said in a media briefing last week that the epidemic shows few signs of slowing down: to date, more than 1,100 cases of vaping-related illness have been reported nationwide, and Schuchat said that the epidemic is ‚Äúcontinuing at a brisk pace.‚Äù

But even two months into the nationwide investigation, the cold hard truth is that we know little more about the culprit than we did when it started. ‚ÄúWe know almost nothing about this right now,‚Äù Dr. Peter Shields, lung medical oncologist and deputy director of Ohio State University Comprehensive Cancer Center, tells Rolling Stone.¬Ý

From a public health investigation standpoint, part of the issue is purely logistical: it‚Äôs been difficult for state health departments to collect and test all of the relevant samples, many of which may have been thrown out prior to a patient presenting with symptoms (or may not have been provided to doctors to begin with). But the larger issue, says Shields, is that this is a complex and multi-pronged public health discussion. ‚ÄúI see it as three trains on three parallel train tracks,‚Äù he says. ‚ÄúOne of the trains is what‚Äôs going on right now, with these people getting really sick, really fast. The second train is the long-term health effects of electronic cigarettes or THC cigarettes‚Ä¶ and the third train is kids and flavors.‚Äù

The problem, says Shields, is that we don‚Äôt know ‚Äúwhere these train tracks merge,‚Äù or if they even do at all, even though that‚Äôs how the discussion around vaping has been treated by lawmakers and by the media. Despite emerging research indicating that many of the products implicated have been THC cartridges and not traditional nicotine e-cigarettes, states like Michigan and New York have issued emergency bans of flavored e-cigarettes, and Massachusetts has even taken the radical step of banning all e-cigarette products altogether for the next four months. President Donald Trump also announced last month that he planned to institute a federal ban of flavored e-cigarettes, drawing outcry from lobbyists and vaping advocates, who have argued that such a ban could potentially lead to a rise in tobacco use rates.

With the CDC no closer to identifying a sole culprit (or even culprits) behind the epidemic, and with the 30-day deadline for the FDA‚Äôs revision of its guidelines removing flavored e-cigarettes from the market rapidly approaching, here‚Äôs what we know so far about the three different tracks of the vaping health crisis, and what public health officials are doing to try to slow the trains down.

What do experts think is causing the crisis?
With respect to the first ‚Äútrain‚Äù ‚Äî i.e., the recent reports of acute vaping-related lung injuries ‚Äî there are a few different working theories based on the publicly available evidence. Currently, the prevailing theory is that the lung ailments are being caused by ingredients present in cartridges containing THC, most (but not all) of which had been purchased off the black market. Last week, the CDC reported that 78% of the 514 cases it has analyzed thus far involved patients using products containing THC, while a separate study reported that 66% of patients had specifically used Dank Vapes, a black-market manufacturer of ambiguous origin that purports to contain 90% THC.

Much of the focus has centered on vitamin E acetate, a compound that has traditionally been used in skin creams and supplements, but is increasingly being used by black-market producers as a thickening agent. As Rolling Stone previously reported, vitamin E acetate is harmless if ingested or used topically, but can be toxic if inhaled. According to Melodi Pirzada, MD, chief of pediatric pulmonology at NYU Winthrop Hospital in Long Island, the inhalation of vitamin E acetate in oil can cause lipoid pneumonitis, a rare condition that results from fat particles behind inhaled into the lungs. Symptoms of lipid pneumonitis are similar to those presented by the vaping lung injury patients, including chest pain and shortness of breath.

The CDC has been quick to caution that not all of the victims had a history of THC cartridge use, nor have all of the samples tested positive for vitamin E acetate. Another study published in the New England Journal of Medicine last week also cast some doubt on the lipid pneumonia theory, with Mayo Clinic researchers conducting a biopsy review of 17 subjects with vaping-related lung injury. They found that though the majority of the samples (71%) came from patients who had used THC cartridges, the damage appeared to have been caused not by oil inhalation, but by ‚Äúdirect toxicity or tissue damage from noxious chemical fumes,‚Äù Brandon Larsen, M.D., Ph.D., a surgical pathologist at Mayo Clinic Arizona, wrote.

In light of this information, the FDA issued a statement last week strongly urging people to stop using all vaping products containing THC, particularly those purchased off the black market.

So if so many of these cases involved THC cartridges, do people think traditional e-cigarette use is OK?
Well, not exactly. As noted above, the CDC has been quick to point out that not all of the more than 1,110 reported cases have involved THC cartridges, and that some of the patients have reported only using traditional nicotine e-cigarettes (though it‚Äôs worth noting that the fact that cannabis is federally illegal may be affecting patients‚Äô willingness to report their history of prior use).

Furthermore, though it is increasingly looking like traditional e-cigarettes are not driving the current epidemic, there‚Äôs an awful lot of ambiguity regarding the potential long-term health effects of vaping, as well as some question as to whether some members of the population may be predisposed to developing such ailments. We know that nicotine is not good for you, and that many e-cigarette products contain higher levels of nicotine than advertised; we also know that e-cigarettes contain chemicals like propylene glycol and glycerine, which, when heated, can release hundreds of VOCs (volatile organic compounds) that may be harmful when inhaled. Indeed, a mouse study in the Journal of Clinical Investigation last month found that the inhalation of such chemicals, even in the absence of nicotine or THC, led to the mice‚Äôs lungs developing lipid-laden immune cells, an effect mimicking that of lipoid pneumonitis. 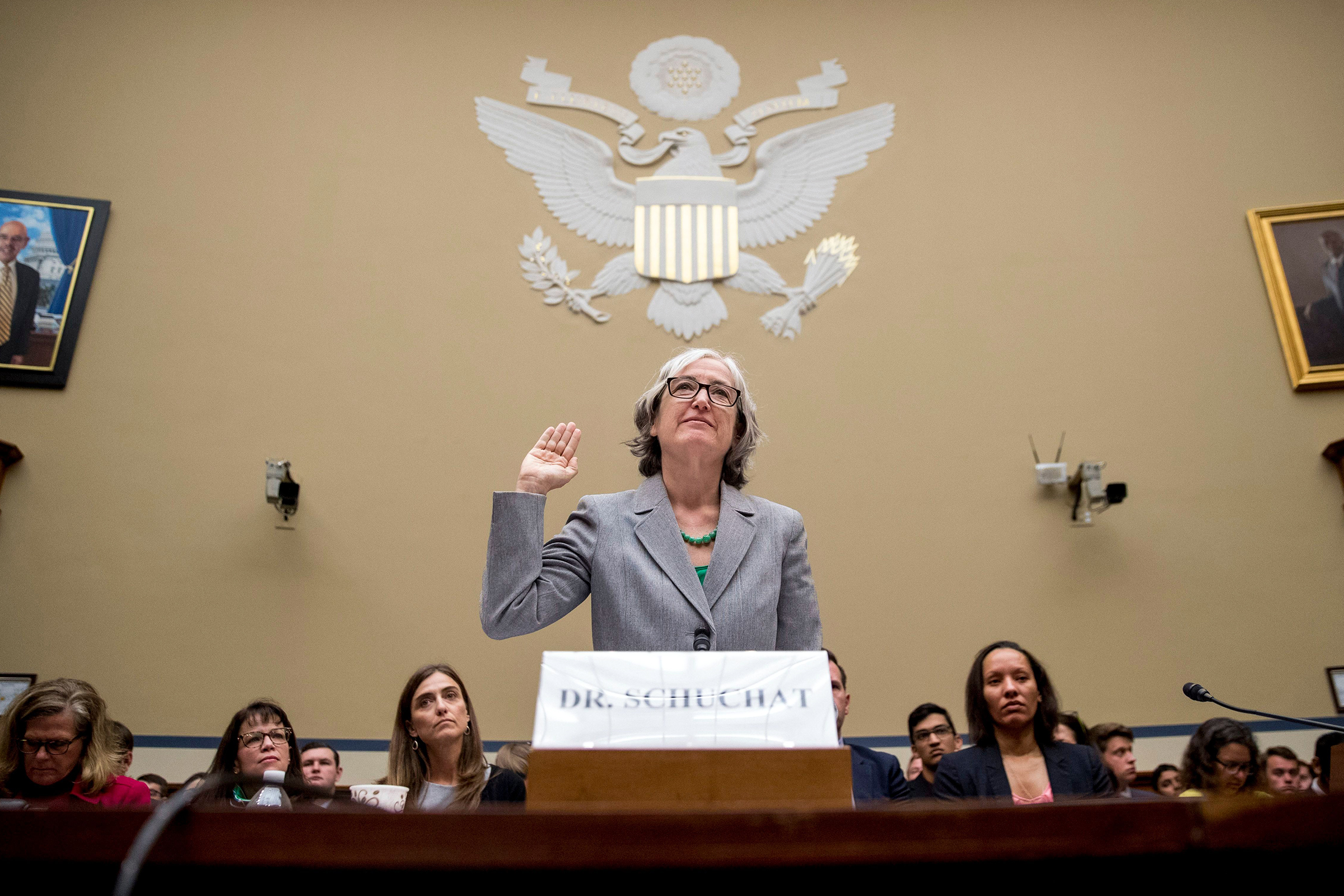 Ultimately, there‚Äôs very little known about what actually happens to the chemicals in e-cigarettes when you heat and inhale them. In her media briefing, Schuchat said that the CDC was currently conducting ‚Äúsophisticated studies‚Ä¶to try to analyze both the product and potentially the vapor or aerosol as well,‚Äù released by the heating of such chemicals. It‚Äôs also a huge question mark as to what the long-term health effects of vaping may be.¬ÝWhile Shields says there is evidence to suggest that using e-cigarettes is safer than smoking traditional cigarettes, ‚Äúsafer is different than safe,‚Äù and we need more time to develop substantial research on the subject. ‚ÄúWith smoking-related diseases, you don‚Äôt know the effects till 20 years or more. So we won‚Äôt know the effects of e-cigarettes for 20 years or more,‚Äù he says.

How is the government responding to the vaping health crisis?
In terms of cracking down on the sale of black-market THC cartridges ‚Äî which, as noted above, constitute most of the products implicated in the most recent vaping-related health crisis ‚Äî a handful of black-market manufacturers have been targeted. In Wisconsin, for instance, Kenosha County law enforcement officials recently arrested brothers Tyler and Jacob Huffhines and their mother Courtney, who were charged with running one of the nation‚Äôs largest bootleg THC cartridge manufacturing rings after police found nearly 31,000 bootleg THC cartridges at their home. Earlier this week, police also arrested a Milwaukee couple and charged them with drug trafficking and possession with intent to distribute after they were discovered with 10,000 THC cartridges.

Given the difficulties in tracking the black-market distribution and manufacturing chain, however, much of the legislative attention has focused on the e-cigarette industry, particularly the flavored product market, as many opponents to the vaping industry have long argued that children and teens are more likely to use flavors like mint, mango, and cr√®me br√ªl√©e. To date, a number of states have authored legislation banning the sale of flavored e-cigarettes, including Montana, New York, Michigan, Washington, Oregon, and Rhode Island. Though most of the focus has been on flavored products, a number of cities and states, most notably Massachusetts and San Francisco, have banned the sale of e-cigarette products altogether.

How have the vaping and cannabis industries responded to the vaping health crisis?¬Ý

Unsurprisingly, the recent health crisis has proved disastrous for the two industries most directly affected: the cannabis industry and the vaping industry. According to data from the cannabis company Headset, dispensary cannabis vape pen sales in California, Nevada, Colorado, and Washington has declined significantly last month, with the vape pen market share in Colorado plummeting from 19% in June to 11% as of last month.

‚ÄúIt‚Äôs a really difficult position that this is putting the cannabis industry in,‚Äù Saul Kaye, the CEO of iCan: Israel Cannabis, tells¬ÝRolling Stone.¬ÝNonetheless,¬Ýactivists and industry leaders have also used the recent crisis as an opportunity to advocate for marijuana policy reform. ‚ÄúNow‚Äôs the time to regulate around it but not stomp on it, which could drive the black market even more.‚Äù

The e-cigarette industry has also been hard hit by the crisis and ensuing media coverage, says Alex Clark, the CEO of Consumer Advocates for a Smoke-Free Alternatives Association (CASAA), an industry lobbying group. He says that¬Ý while he has seen figures indicating a 15-50 percent decline in industry sales, he estimates that it‚Äôs likely more around 50 to 60 percent. This has been coupled by a troubling increase in people ordering products to assemble vape pens for themselves. ‚ÄúOnline companies that sell the individual ingredients for DIY are experiencing backlogs, so there‚Äôs certainly been an increase of people doing DIY and making their own liquids,‚Äù he says. He predicts this trend will continue as more legislation rolls out regulating the industry, and that consumers will move back to smoking traditional tobacco cigarettes as a result.¬Ý‚ÄúThese products have helped millions of people quit smoking and that alone is enough to preserve them [on the market],‚Äù he says.

While it‚Äôs worth noting that the evidence that vaping is an effective¬Ýsmoking cessation tool is mixed, some medical professionals are skeptical that banning e-cigarettes altogether will do much to curb the current health crisis, or that lawmakers are even focusing on the right issue. While none of this is to say that e-cigarette use is healthy or good, it is to say that jumping to adopt new legislation in the absence of viable information from the CDC investigation may be short-sighted. ‚ÄúSo many people think ‚ÄòOh, with this lung toxicity we should ban e cigs.‚Äô But we‚Äôre mixing issues because we don‚Äôt even have all the science yet,‚Äù says Shields.

‚Äú[People] are asking for explanations in a world where we don‚Äôt have much information.‚Äù