The problem with opioid painkillers, and the potential of CBD for MMA fighters 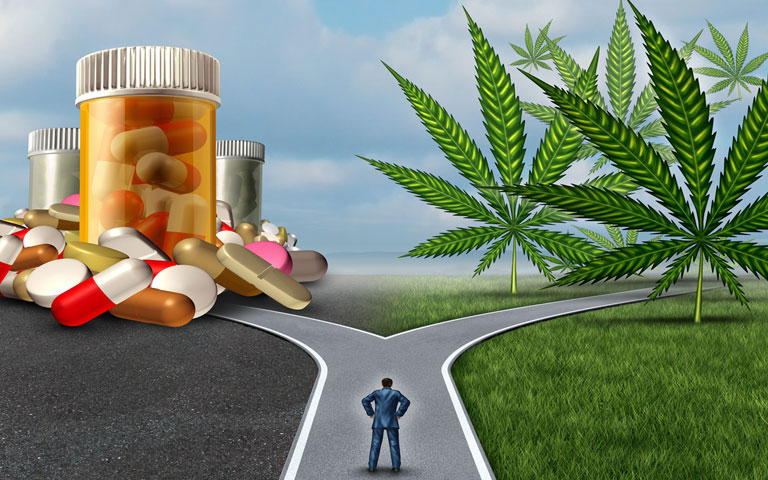 Now that the World Anti-Doping Agency has removed the ban on cannabidiol (CBD), a cannabis compound sans psychoactive effects, MMA fighters now have a clear choice when choosing painkillers: opioids or CBD oil.

The benefits of CBD have been heralded in the US media of late, as the country tries to get a grip on the opioid crisis, which caused more than 40,000 deaths by overdose in 2016. The problem has seeped into the MMA, with former fighter Bas Rutten admitting that he became addicted to opioids. Nate Diaz had even turned to CBD before WADA dropped the ban, having been seen drawing on a CBD vape pen following UFC 202.

But just how effective is this cannabis-derived medicine, which is said to have very few side effects? And can the pain-relieving power match that offered by the strongest prescription opioids? In this article, weâ€™ll try to find out.

Painkillers donâ€™t necessarily mean opioids, but for MMA fighters who are subjected to extreme impact in the octagon, and flat-out training outside of it, opiate-based meds are notoriously common when it comes to treating pain. Some have commented on how easy it is to keep popping pills to make training bearable and post-fight pain less pertinent.

But itâ€™s that which makes opioids so dangerous â€“ the chemical connections they make inside the body creates a dependency, causing the body to crave stronger and stronger doses to get its fix. Thatâ€™s how Rutten ended up on OxyContin â€“ and he even admitted that even that wasnâ€™t really helping come the end.

But opioid painkillers do not solely lead to addiction issues. Evidence suggests they can also cause gastrointestinal problems, insomnia, fatigue, vomiting and more. Even over-the-counter medication can have the same kind of effects, albeit rarely so pronounced.

The US Department of Health and Human Services has stated that more than 12 million Americans misuse prescription opioids. But not all of that can be blamed on the patient. It should also be noted that the same branch of the federal government is silently aware that cannabinoids such as CBD have medicinal properties, having been granted a patent in 2003 for their use as antioxidants and neuroprotectants.

For MMA fighters who regularly have to deal with blows to the head, the neuroprotective properties of CBD could be just as important as the analgesic effects. Head injuries can lead to neurological damage later in life, which can cause Parkinsonâ€™s and other neurodegenerative diseases. Studies on CBD and another non-psychoactive cannabinoid called cannabichromene (CBC) are fascinating â€“ not only are both compounds neuroprotectants, but they could even encourage the growth of new brain cells, a process known as neurogenesis.

The benefits of CBD

CBD and all cannabinoids work primarily in a different system to opioids â€“ namely the endocannabinoid system. Instead of binding to opioid receptors to reduce pain, CBD functions in a mechanism that helps to ease the sensation of pain.

When a part of the body experiences pain, it sends signals to the brain which then reacts accordingly. Opioids serve to break the connection between the injured tissue and the central nervous system, essentially numbing the pain. Canna-scientists are yet to ascertain the exact reasons why CBD has a pain-relieving effect, but as a well-balanced endocannabinoid system is vital for general wellbeing, itâ€™s feasible that CBDâ€™s promotion of this is what quells pain.

However, it seems â€“ and the science is even more limited here â€“ that cannabinoids can produce many of the effects that opioid painkillers do, reducing inflammation-related pain, neuropathic pain and more. The barriers to cannabis research that prevented sufficient study for most of the 20th century has unfortunately put scientists a long way behind when it comes to understanding the effects of this remarkable herb.

Therefore, CBD could well have all the benefits of opioids, without the addiction and other side effects. Itâ€™s also an indication that opioid painkillers are an inferior form of medicine, considering that they only operate within the opioid system, while cannabis compounds operate in the opioid system and the endocannabinoid system. Opioids essentially put the body out of kilter without rebalancing it.

Americans are swapping opioids for CBD

MMA fighters would do well to look to the rest of America, which has had free access to CBD e-liquid and other such types of CBD medication for longer. In 2016, the University of Michigan released a study which showed medical cannabis use helped to cut down opioid drug intake by more than 60 percent, which helped to reduce opioid side effects and improve quality of life.

However, there is also research showing CBD to interfere with other prescription drugs due to the effect it has on the cytochrome P450 system. CBD could slow the metabolization rate of these drugs, meaning that it takes longer for the liver to remove these from the body. This isnâ€™t necessarily a problem â€“ it just means that patients should reduce their prescription drug intake.

However, there are few medical professionals well-versed in both cannabis and prescription medication, so finding quality advice in this area isnâ€™t easy. And as cannabis becomes an integral part of healthcare, this is definitely a matter that doctors need to become better acquainted with.

However, CBD looks to be effective with every type of pain that opioids work for. Therefore, if patients can get the right advice, itâ€™s possible, over time, to switch from opioids to CBD without suffering from severe opioid withdrawal symptoms.

This is the debate that MMA fighters need answers to. While there are factors which could prevent CBD from being suitable, in general, itâ€™s apparent that cannabidiol is much, much safer and less likely to cause long-term health problems. The balancing effect the compound has on the endocannabinoid system, through the promotion of other endocannabinoids, is something that opioid medication simply cannot do.

Getting the right dosage may take some time, however since CBD has no abuse or addictiveness potential according to the World Health Organization, there are few risks with experiment. A hefty dose of CBD may cause intense sedation, but that pales in comparisons to gastrointestinal complaints and opioid addiction. Finding the right form of CBD treatment is also important. To deal with sharp bursts of pain, vaping CBD e-liquid or concentrates will provide the most potent, rapid relief. However, for pain that is more constant, edibles may be preferable as these release cannabinoids into the bloodstream much more slowly, with the effects lasting for six to eight hours roughly, rather than two to three.

The World Anti-Doping Agencyâ€™s decision to take CBD off the banned list is a progressive move, and one thatâ€™s been a long time coming. In addition to helping MMA fighters, it could also prove a stepping stone for NFL athletes, who are also battling for permission to use medical cannabis over opioids â€“ the problems in UFC and the NFL are quite similar. The neuroprotective qualities of CBD are often forgotten (perhaps because they only truly become an issue years later), but they are just as important as the compoundâ€™s painkilling properties.

The likes of Ian Heinisch, Cain Velasquez, Nate Diaz and Bas Rutten have paved the way for CBD, and it may just be to the benefit of all MMA fighters. And itâ€™s possible that CBD use in the MMA could set an example to other sports, showing them how important it is to protect the short and long-term health of their athletes.