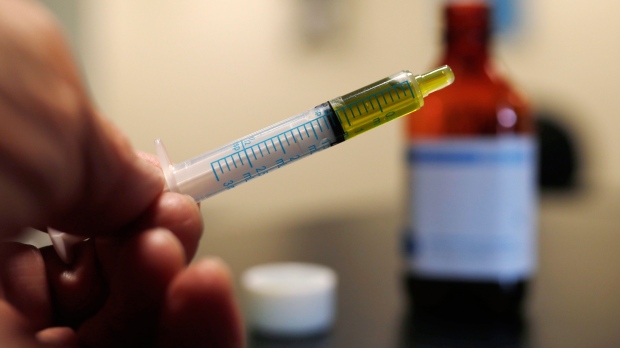 VANCOUVER — Retailers across Canada are struggling with a shortage of all cannabis, but there’s one product they’re especially desperate to keep on shelves: cannabidiol or CBD, a non-intoxicating extract vaunted for its purported health benefits.

The extract, most commonly sold as oil, has been promoted as a natural cure for pain, anxiety and insomnia, despite limited medical research. Many customers are coming in asking for it, especially first-time and older users, store owners say.

“When something becomes available on the cannabis wholesale ordering sheet, everybody tries to get all that’s available. It’s like a race. That’s one of the biggest opportunities we’re facing in the legalized market.”

Companies are ramping up hemp growth to produce the trendy extract, but observers expect the shortage to persist until late this year. Meanwhile, scientists are working to separate the hype from reality when it comes to medical claims about the drug.

While licensed producers were preparing for legalization last year, they assumed most of the demand was going to be for cannabis high in THC, the intoxicating ingredient, said Khurram Malik, CEO of Biome Grow.

The buzz around CBD grew with the passage last year of a U.S. law known as the farm bill, which allows for the growing of hemp for the purposes of extracting cannabidiol, he said. Similar regulations came into effect in Canada in October.

But it was the U.S. law that drove up media coverage and social-media influencer chatter, Malik said. Kim Kardashian West recently posted on Instagram about her “CBD baby shower,” where she invited guests to make cannabidiol-infused salt scrubs and body oil.

“Because of the farm bill passing, the sexiness or the in-vogue profile of CBD went through the roof,” said Malik. “The demand side just blew up and caught everyone by surprise, on both sides of the border.”

Extracting CBD from hemp, which is low-THC and high-CBD, is more affordable because the crop can be grown outdoors on a large scale under Canadian rules that are less restrictive than those for producing high-THC marijuana, Malik said.

Biome Grow has partnered with CBD Acres, which Malik said will supply his company with up to 20,000 kilograms of cannabidiol concentrate annually in order to serve Canadian and international markets.

“There has been a significant learning curve for licensed producers as they transition into supplying a new market,” said B.C.’s Liquor Distribution Branch in a statement. “Licensed producers are working towards becoming more efficient, however many of their expansion projects have not yet been fully ramped up.”

The branch added it expects supply to increase in the second half of 2019 as expansions come online and more producers receive licences to enter the marketplace.

Beverley Ware, a spokeswoman for the Nova Scotia Liquor Corp., said while it has “CBD leaning” products, it has not been able to consistently carry pure CBD oil due to the national shortage.

Customers looking for CBD products would prefer not to smoke them and don’t want the added THC, said Darrell Smith, spokesman for the Newfoundland and Labrador Liquor Corp.

“It has been a challenge to source a steady supply of these products as they are often reserved for the medical cannabis community,” he said.

“I think what the industry, given its newness, is grappling with — and a lot of companies are getting a good handle on — is about consistently growing the product that consumers want,” he said.

“It’s not easy. I know people think, ‘It’s just a weed. We can grow this no problem.’ It’s not. You’re still growing a plant and Mother Nature has a large say in that.”

The legalization of edibles, extracts and topicals later this year is likely to further ramp up demand, Ross Vrana said. CBD-infused creams, beverages, food and even pain-relief products for pets are expected to be growing market segments.

Despite the hype, research into the health benefits of cannabidiol has been fairly limited, said Dr. Gabriella Gobbi, a psychiatrist at McGill University who has studied the drug.

Gobbi’s team published a study in the journal Pain last October that pinpointed the effective dose of CBD for safe relief of pain and anxiety. The U.S. Food and Drug Administration has also approved a CBD drug to treat children with severe epilepsy.

But more research is still needed, particularly on CBD’s effects on anxiety and insomnia, Gobbi said.

Some patients who try it experience no effects and studies have also indicated a placebo effect in some people with anxiety, depression and pain, she added.