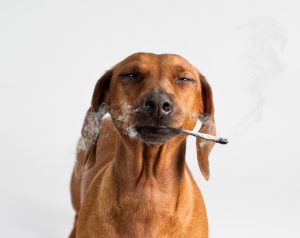 You know pot is becoming acceptable when a prosecutor in her summation says (as happened in my trial last week), â€śSo the witness smoked some pot, who cares? What difference does that make?â€ť

Marijuana has been either legalized, decriminalized, or authorized for medical uses in 30 states, and even though itâ€™s still illegal to actually smoke pot in public in any of those places, its general acceptance grows day to day.

Pro-pot advocates are, thus, broadening their reach and seeking ways to make pot legal for pets as well.Â  Itâ€™s not with the intention of getting Rover high (veterinarians say that the THC found in marijuana is actually harmful to dogs), but in hopes of relieving the pain pets experience from chronic conditions ranging from arthritis to epilepsy to anxiety to cancer.

Pot for pets has been sold without the THC â€” the factor that makes the user high. Instead, in the form of oils, tinctures, and chewables, it features cannabidiol (CBD) â€” a cannabis plant extract associated with pain relief.

Companies like Treatibles have been selling pot for pets online and through pet stores even though technically itâ€™s not legal. Thatâ€™s because cannabis is still listed as a controlled substance by the federal government and Attorney General Jeff Sessions has insisted on enforcing anti-marijuana laws.

Because of this, veterinarians have been advised by state veterinary boards not to prescribe hemp or CBD or even mention it as a treatment. Otherwise they risk losing their licenses. Thus, most of the information about dosages and degree of effectiveness is anecdotal.

Based on comments on social media, pet conferences, and other forums, pet owners report that pot makes their suffering pets feel better and act more like their old selves.Â  It has the additional benefit of not causing harm to their livers as do traditional medicines veterinarians prescribe for pain.

Cinnamon, a chubby beagle from Missouri who has bad hips and remained mostly sedentary, amazed his owner by hopping off the coach and running outside after just one dose of hemp oil.Â  Other pet owners have reported their pets are more relaxed, energetic, loving, and willing to be touched.

At a recent convention for cat lovers, CatCon, in Pasadena, California, the panel discussion on â€śCannabis and Cats: What You Need to Know Meow,â€ť was packed.

People are googling CBD for pets and â€śhemp for petsâ€ť at higher rates than ever according to according to hemp-distributor GlobalCannabinoids.io.

Meanwhile, the American Veterinary Medical Association is urging caution, suggesting the safety of giving cannabis to pets is still unknown.Â  Other groups agree. Â â€śAt this point, this area contains more questions than it does answers,â€ť says Dr. Tina Wismer, director of the Animal Poison Control Center at the American Society for the Prevention of Cruelty to Animals (ASPCA).

Searching online to determine proper dosages and to judge the quality of products is a crap-shoot.Â  It could help your pet or injure it.

But help may be on the way. Representatives in at least two states â€” California and New York â€” have proposed legislation to make cannabis legal for pets. Â That would mean veterinarians could give advice without fear of losing their licenses.Â  In the meantime, until vets are involved and prescribing, the ASPCA warns caution.

Toni Messina has tried over 100 cases and has been practicing criminal law and immigration since 1990. You can follow her on Twitter:Â @tonitamess.