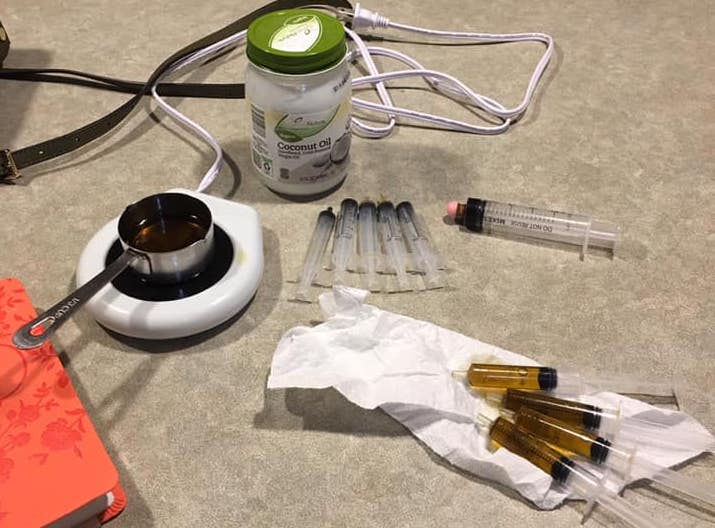 A mother in Michigan believes â€śmedicineâ€ť she makes at home is curing her childâ€™s brain cancer. Becky F. posted an update on Facebook announcing her success using marijuana to heal her daughterâ€™s cancer. She believes that distilling marijuana in coconut oil will keep her daughter cancer free for life, cure her seizures, and replace her daughterâ€™s need for additional chemotherapy and radiation.

According to Becky, her daughter suffers from multiple illnesses including seizures pain, nausea, and brain cancer. Her daughter has undergone numerous brain surgeries, chemotherapy, and radiation to treat the disease.

â€śCan you guess what Iâ€™m doing?!

No Iâ€™m not getting highâ€¦ no Iâ€™m not doing anything illegalâ€¦ no Iâ€™m not making the wrong choicesâ€¦I am making my daughters medicine for the next 90 days! Medicine that she will need probably for the rest of her life to keep her from having cancer.. for the THIRD TIME!â€ť

Following her exciting announcement, Becky went on to list the benefits her daughter has experienced. Becky believes her concoction of marijuana and coconut oil has eliminated her daughterâ€™s cancer, reversed brain damage, stopped seizures, replaced chemo and radiation, and has kept her cancer free for two years.

But no matter what you call it or what your opinion is on this, it doesnâ€™t change t the fact that:

THIS saved my daughters life!

THIS reversed side effects from radiation to her brain that were supposed to be permanent!

THIS has taken the place of keppra to stop seizures

Cannabis has taken the place of OxyContin and morphine after a 2nd brain surgery!

Cannabis took the place of zofran and to control nausea and vomiting!

THIS took the place of periactin and megace to increase her appetite!

Cannabis took the place of Benadryl and sleep aides to help her sleep!

THIS took the place of all the chemo meds and complete cranial spinal radiation they wanted to do on my daughter when she relapsed!

And THIS CURED MY DAUGHTERS BRAIN CANCER AND HAD CONTINUED TO KEEP HER CANCER FREE FOR ALMOST 2 years!

After she uploaded her post, commenters went wild. Mothers with sick children asked Becky for advice on how to treat their children. One mother asked Becky if marijuana would cure her daughterâ€™s neurodegenerative disease.

Other parents of children with cancer, asked Becky if abandoning chemo and radiation will cure their children. One mother asked Becky if she could help her treat her daughterâ€™s and her own lung cancer.

As more people jumped onto Beckyâ€™s promise of a cancer cure, others started to push back on her claims. According to the American Cancer Society marijuana is not proven to treat, prevent, or cure cancer. However, marijuana is approved in many states to manage symptoms associated with cancer and cancer treatment.

Cancer patients that use marijuana can see improvement in appetite, pain, and nausea.

Relying on marijuana alone as treatment while avoiding or delaying conventional medical care for cancer may have serious health consequences.â€ť

Beckyâ€™s claim that the cannabis cured her daughterâ€™s cancer is unfounded. The American Cancer Society indicates that the only benefits from cannabis or marijuana are when the plant is smoked or eaten. Reducing the plant into an oil extract has not been studied.

Additionally, there is little to no evidence that cannabis oil can help with nausea, vomiting or pain.

â€śA number of small studies of smoked marijuana found that it can be helpful in treating nausea and vomiting from cancer chemotherapy.

A few studies have found that inhaled (smoked or vaporized) marijuana can be helpful treatment of neuropathic pain (pain caused by damaged nerves).

There are no studies in people of the effects of marijuana oil or hemp oil.â€ť

Although her method is not studied nor approved to treat cancer, Becky fought back against attacks by commenters. One commenter, Amanda, suggested Beckyâ€™s claim provided false hope to desperate people. Amanda became worried about Beckyâ€™s claims because Amandaâ€™s uncle died from the same form of brain cancer.

In their exchange, Becky shared a copy of her daughterâ€™s MRI from 2017. Following the 2017Â MRI, Becky said her daughter had brain surgery. Doctors recommended chemotherapy and radiation, but Becky declined these treatments. Instead, Becky opted to use marijuana oil to treat her daughter.

Becky provided a copy of her daughterâ€™s MRI written report. The report indicated the presences of a lesion in the brain. The radiologist noted lesion growth from August 2017 to February 2018.

Commenters pushed back and insisted that the MRI report does not indicate remission or cancer cure. Additionally, Amanda pointed out that the MRI proves that her daughter has on-going issues and a lesion. 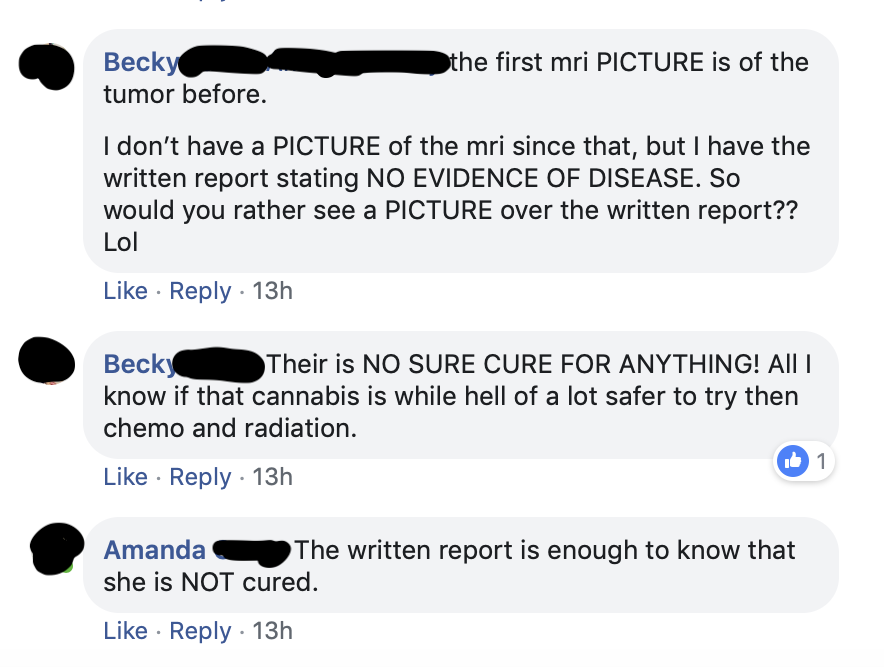 Even though numerous people pushed back, others cheered on Becky for choosing marijuana for her daughter. Several people shared their success using marijuana to treat chronic pain and nausea. However, no one in the comments said marijuana had successfully cured their cancer.

Beckyâ€™s daughter has an aggressive form of brain cancer called Medulloblastoma. The disease produces tumors throughout the brain and spinal cord. Tumors are fast growing, and aggressive treatment is needed to stop cancerâ€™s progression. Surgical resection of the tumors followed by chemotherapy and radiation has proven to slow the progress of the disease.

Beckyâ€™s daughter has undergone multiple resections and rounds of chemo to treat her cancer. Due to this fact, there is no way to determine the effectiveness of cannabis in treating the disease.

Even though her claims sound miraculous, there is no likelihood that cannabis cured her daughter. Nor should her statements be used as a reason for a patient to abandon traditional cancer treatments.

Alternative medicine is not proven for cancer treatment. People that use alternative therapies instead of chemotherapy and radiation are five times more likely to die. While her daughter may be in a phase where her cancer is not growing as quickly, reports do not support Beckyâ€™s claims.

Finally, please do not believe unbelievable claims on the internet.