Medicinal cannabis will be available on prescription for the first time in Britain from the autumn in a major shift announced by the Home Secretary today.Â

Sajid Javid said following advice from the chief medical officer, he would reclassify cannabis products used by doctors elsewhere in the world.

The dramatic change to policy comes after a scandal over epileptic boy Billy Caldwell being banned from taking cannabis oil prescribed abroad.

Billy was given back the medicine after a high profile campaign by his mother forced Mr Javid to grant a 20-day emergency licence for its use.

The Home Secretary insisted today’s change was not the first step toward broader legalisation of cannabis.Â 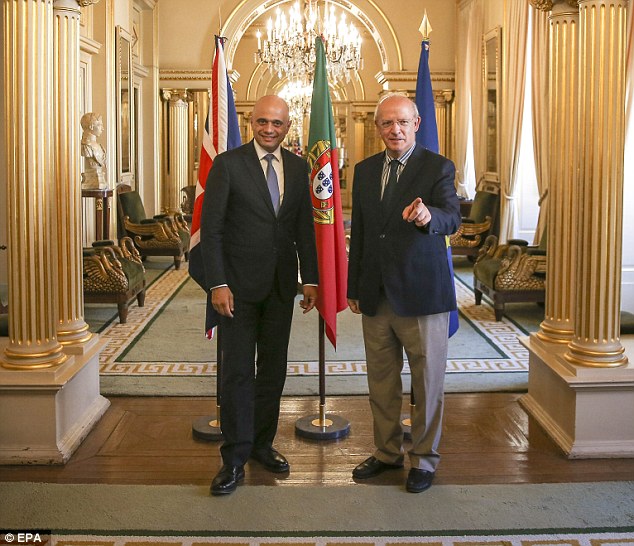 Sajid Javid (left in Portugal today) said following advice from the chief medical officer, he would reclassify cannabis products used by doctors elsewhere in the world

Mr Javid said:Â ‘Recent cases involving sick children made it clear to me that our position on cannabis-related medicinal products was not satisfactory.

‘That is why we launched a review and set up an expert panel to advise on licence applications in exceptional circumstances.

‘Following advice from two sets of independent advisors, I have taken the decision to reschedule cannabis-derived medicinal products â€“ meaning they will be available on prescription.

‘This will help patients with an exceptional clinical need, but is in no way a first step to the legalisation of cannabis for recreational use.’Â

Genevieve Edwards, Director of External Affairs at the MS Society, said: ‘This is exceptional news and we want to thank the Home Secretary for the speed at which this decision has been made.Â

‘We started campaigning for cannabis for MS exactly a year ago and it’s incredible to see how far we’ve come since then. The priority now has to be making sure everyone who could benefit can access cannabis in a safe and responsible way.

‘We plan to work closely with the Government to determine what exactly this will mean for people with MS. This life-changing decision could help thousands with the condition who haven’t been able to find relief for their pain and muscle spasms.’ 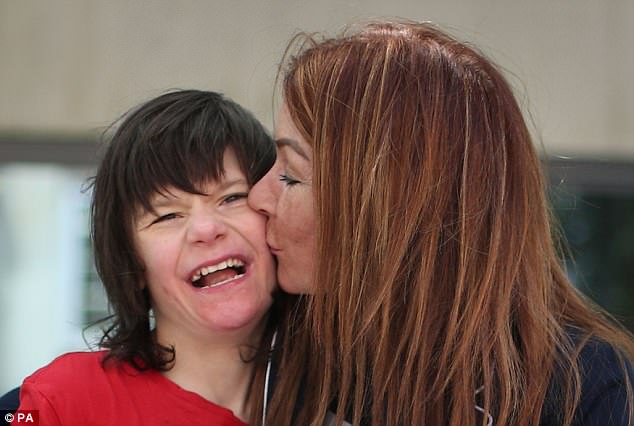 Mr Javid ordered a two part review into medicinal cannabis earlier this summer after the outcry over the drug.Â Â

In the first part of the review commissioned by the Home Secretary, the Chief Medical Advisor, Professor Dame Sally Davies, concluded that there is evidence that medicinal cannabis has therapeutic benefits.

The Advisory Council on the Misuse of Drugs (ACMD) carried out the second part of the review, considering the appropriate schedule for cannabis-derived medicinal products, based on the balance of harms and public health requirements.

The ACMD recommended that such products meeting a clear definition of what constitutes a cannabis-derived medicinal product should be placed in Schedule 2 of the Misuse of Drugs Regulations 2001.

WHAT IS CANNABIS OIL AND IS IT LEGAL IN THE UK?

Government advisers made it legal to buy CBD in 2016

Government advisers made it legal to buy cannabidiol (CBD) oil in 2016 after they admitted that it has a â€˜restoring, correcting or modifyingâ€™ effect on humans.

However, the oil’s legal status has confused thousands across England and Wales, after the MHRA back-tracked on its position just weeks after.

Suppliers now have to obtain a licence to sell it as a medicine, following the decision in October two years ago â€“ but some weave the strict rules.

Manufacturers are able to avoid regulation by selling it as a food supplement – ignoring the lengthy process of gaining a medicinal licence.

CBD oil, which can reportedly help with back pain, anxiety and epilepsy, has yet to be approved for use on the NHS in Scotland.

It comes in many forms, the most popular being an oil – which users spray under their tongue – or gel tablets which melt slowly in the mouth.

However, cannabis oil, which contains THC – the compound that gives users a ‘high’ – is illegal under UK laws.

But Billy Caldwell, from Castlederg, Northern Ireland, made headlines last April when he became the first Briton to be prescribed it on the NHS.Â

Cannabis oil, which reportedly has no side effects, influences the release and uptake of â€˜feel goodâ€™ chemicals such as dopamine and serotonin.Â

It said there is evidence of medicinal benefits from some of these products in certain circumstances.

It recommended doctors in the UK should have the option to prescribe cannabis-derived medicinal products for their patients.

In line with the ACMD’s recommendations, the Department for Health and the Home Office will develop additional frameworks and clinical guidelines to ensure that cannabis-derived medicinal products can be prescribed safely to patients but cannot be traded illicitly.Â Â

Mother who fought for her sick son… and changed the lawÂ

By Claire Duffin for The Daily MailÂ 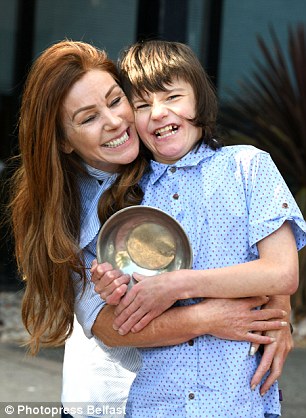 It was a mother’s emotional appeal to get cannabis for her sick son that sparked a national debate on the legalisation of the drug.

Few could fail to be moved by Charlotte Caldwell’s desperate pleas to be allowed to give her epileptic son Billy, then 12, cannabis oil to help control his seizures after her supply was seized by customs officials at Heathrow in June.

Just four days later, her worst fears were realised when, without his medication, Billy suffered a life-threatening fit and was taken to London’s Chelsea and Westminster Hospital where Miss Caldwell condemned his ‘callous treatment’ at the hands of the law.

Billy’s story sparked outrage and within hours, the Home Office had granted a 20-day licence for the use of the banned substance and the Government announced a review of the current laws.

But it later emerged Miss Caldwell was linked to a web of drugs manufacturers and cannabis pressure groups who all want to see the laws on the drug relaxed across the board, not just for medicinal purposes.Â

Her campaign was also being bankrolled by a multi-millionaire businessman who is intent on seeing marijuana fully legalised in the UK, the Daily Mail discovered.

Their affiliation raise troubling questions about whether Miss Caldwell â€“ and Billy â€“ had unwittingly been taken advantage of by those who seek to change the law on cannabis.

The medicinal cannabis industry is staggeringly lucrative, so much so that in California it is being compared to the Gold Rush. Many children have travelled abroad for the treatment.

But it is seen by many to be a Trojan horse in the battle to legalise cannabis for recreational purposes as well.

Miss Caldwell’s campaign was being funded by Paul Birch, the British tech tycoon who founded the Cannabis is Safer than Alcohol (CISTA) political party.

Her 52-year-old backer Mr Birch, who has admitted consuming cannabis since he was 23, campaigned ahead of the 2015 general election for the legislation of recreational marijuana in Britain.Â

He is also the founder of UK think-tank Volteface, which has called for the legalisation of medicinal and recreational cannabis in this country, and which also supported Miss Caldwell with her campaign.

It also emerged that Miss Caldwell was supplied with cannabis oil by Tilray, a Canadian company with close links to Volteface.

Tilray, which the same month announced plans for a $100million (Â£76million) float on an American stock exchange, is owned by Privateer Holdings â€“ a private equity firm whose other companies sell cannabis products for legal recreational use in the United States.

And Privateer Holdings funded a trip to Seattle for Labour MP Jeff Smith and Tory MP Crispin Blunt, both of whom have been instrumental in driving the legalisation Bill through the Commons.

Mr Blunt and Mr Smith both put their name to a Private Members’ Bill, which was introduced last year by Labour’s Paul Flynn, calling for the production, supply, possession and use of cannabis and cannabis resin to be allowed for medicinal purposes.

It was due to have its second reading in October.

Miss Caldwell had also set up her own business to sell bottles of legal cannabis oil â€“ named Billy’s Bud after her son â€“ and registered a second company offering what she refers to as ‘medical products’ to raise money for him.

Furthermore, she conceded her decision to bring the cannabis oil into this country â€“ sparking the tearful scenes at the airport â€“ was in fact part of a well-orchestrated strategy to change Britain’s laws on cannabis.

‘It was a stand I was making,’ she said. ‘What I wanted to happen was they [the Custom Officers] would let us through with the medicine and that would have been the UK Government recognising this cannabis has medicinal purposes.’

Miss Caldwell, from County Tyrone, Northern Ireland, insisted she has not made a fortune through her firm Billy’s Bud.

She said her battle had ‘nothing to do with recreational cannabis use’ and its legalisation.

But she admitted there may be those in the industry who ‘see a good story’ and want to ‘jump on the bandwagon’.

Yesterday, perhaps not surprisingly, her powerful backers were among the first to offer their congratulations, after Home Secretary Sajid Javid announced medicinal cannabis would be made available on prescription.

On Twitter, Volteface thanked Mr Birch for his ‘visionary philanthropy’ which ‘provided the resources to make this possible’.

Miss Caldwell said she was ‘beyond delighted’ at the announcement, which came on Billy’s 13th birthday, but said she now wanted to see responsibility for cannabis passed from the Home Office to the Department of Health.

‘It’s been an eternity and the click of the fingers at the same time,’ she said.

« Could an Epilepsy Drug Change Federal Policy on Marijuana? Probably Not A Reality Check for CBD Oil »