Medical marijuana only option for child with seizures – The Franklin Sun 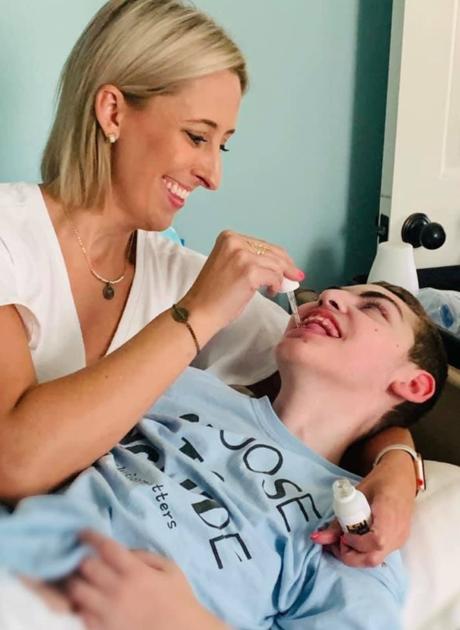 Katie Corkern is a mother of three sons in Amite. One of her sons is Connor, 13, who has a birth defect in his brain. For most of his life, he has experienced between 50 to 200 seizures each day.

He is unable to function independently and suffers damage to his brain, liver and other organs from his array of anti-epileptic medications.

‚ÄúHis neurologist had come to a point where we were just at a loss,‚ÄĚ said Corkern. ‚ÄúWe tried so many different medications, we tried surgeries, we did diets, and nothing was really relieving him from the constant seizure activity in his brain.

‚ÄúAt that point, he was on seven different anti-epileptic seizure medications,‚ÄĚ she said. ‚ÄúThe side effects were devastating, along with the constant seizure activity. At some point, the doctor said, ‚ÄėWell, the last thing I would recommend is medical marijuana, but that‚Äôs not legal here in Louisiana.‚Äô‚ÄĚ

Thus began Corkern‚Äôs journey, along with state Sen. Fred Mills, R-Parks, and many other advocates to legalize medical marijuana in Louisiana. That happened in 2016, but the therapeutic use of marijuana is just gaining momentum here after a slew of delays and regulatory setbacks. Roughly 3,500 patients in Louisiana are using it, mostly to relieve pain, and some see it as a substitute for highly addictive opioids. And with more supporters of the program joining the state Legislature this year, it may be expanded to provide greater accessibility statewide.

For Connor Corkern, using medical marijuana has lessened some types of seizures by 75 percent, according to his mother, along with giving him the ability to now clap and express emotions.

The average age of medical marijuana users in the state is 52, and the most common condition is intractable pain. Thirteen percent of users are PTSD patients, while 26 percent of the patients are recovering opiate users.

The state has approved two facilities to grow marijuana for medical use: the GB Sciences Louisiana location at the Louisiana State University Agricultural Center‚ÄĒrecently bought out by Wellcana Plus LLC‚ÄĒ and Ilera Holistic Healthcare at Southern University.

Licensed doctors recommend marijuana to patients rather than prescribe it to protect themselves from federal laws that prohibit the use, sale or distribution of marijuana. The patients may receive their medication through a 30-milliliter tincture, which is a concentration dissolved in an alcohol solution for oral consumption.

Tinctures are made with cannabinoids THC, or tetrahydrocannabinol, and CBD, or cannabidiol. THC combines with receptors in the brain that control mood and pain to create a sense of euphoria in users. CBD creates no ‚Äúhigh‚ÄĚ for users but increases attentiveness, lowers anxiety and relieves inflammatory pain.

Medical marijuana was first legalized in Louisiana in the 1970s, but the legislation lacked the regulations needed to implement it. It was not until Mills sponsored a bill in 2016 to regulate growing facilities and allow for the licensing of doctors and pharmacies that the use of medical marijuana became viable in the state.

‚ÄúA few people called me up that had just debilitating diseases,‚ÄĚ Mills recalled, and hearing from them made him feel that the decision about whether to use medical marijuana should be between the physician and the patient.

After his bill passed, it took two and a half years before medical marijuana became available to the public. Once the regulation and testing period between GB Sciences and the Department of Agriculture finished, the company held a monopoly on a limited supply of medical marijuana for months.

Southern University‚Äôs facility had even longer delays. Its original partner, Advanced Biomedics, did little to begin production before the majority owner sold his stake in the company last fall. Ilera Holistic Healthcare became the sole partner in the venture soon after that and did not begin production until August.

The program continues to have problems. Health insurance does not cover medical marijuana, and 30-milliliter bottles cost $90 to $250, making the medicine next to inaccessible for lower-income people.

It takes Connor Corkern 15 days to go through a bottle. His family spends $200 per month on medical marijuana, not to mention the other medications they buy for him.

The Louisiana Board of Pharmacy, which licenses and regulates the pharmacies that dispense marijuana products, has received complaints about potential patients‚Äô lack of access to the treatment.

‚ÄúWe have heard from some patients that there are not enough physicians authorized to issue recommendations for medical marijuana,‚ÄĚ said Malcom Broussard, the board‚Äôs executive director. ‚ÄúOthers have told us about the limited number of pharmacies available to dispense the product as well as the retail cost of those products.‚ÄĚ

There are only three pharmacies in the northern and central parts of the state: one each in Alexandria, Monroe and Shreveport.

Residents of Jonesboro looking to obtain medical marijuana face a 45-mile drive northeast to the nearest pharmacy in West Monroe. DeRidder residents must travel to Alexandria‚Äôs medical marijuana pharmacy and back, totaling 140 miles.

On the production side, Sen. Mills critiqued the intense level of testing and regulation on growing facilities, as they caused multiple delays in launching the medical marijuana program.

‚ÄúI think what we wanted to be was extra cautious,‚ÄĚ he said. ‚ÄúSometimes, as you know, perfection and being too cautious can take time.‚ÄĚ

Mills and other advocates say that with a big changeover in lawmakers as a result of recent term limits, there could be adjustments to the medical marijuana rules in this year‚Äôs session.

Travis Johnson, a Democrat from Ferriday, who won the general election in November and will be a freshman in the House, said he supports medical marijuana legislation, unlike his predecessor Rep. John Anders, D-Clayton, who voted against the 2016 bill to legalize medical marijuana.

Other incoming lawmakers, like Barry Milligan, a Republican from Shreveport who was elected to the state Senate, are keeping their cards close to their chests. Milligan has stated that he is against recreational marijuana use, but he is making no statements regarding medical marijuana until he is sworn into office.

One change likely to come out of the next legislative session is expanding the list of conditions that qualify for medical marijuana, said Mills and Commissioner of Agriculture and Forestry Mike Strain.

As for delivery mechanisms, Louisiana will soon introduce metered-dose inhalers. Medical marijuana producers are also working on topical ointments, gummies and oral strips similar to Listerine mints, according to Jesse McCormick, the executive director of Louisiana Association for Therapeutic Alternatives.

‚ÄúWe will be supportive of whatever the Legislature asks us to do,‚ÄĚ Strain said.

Still, some advocates say it costs so much to buy medical marijuana that patients could be tempted to black market means of obtaining cannabis. Patients also could find a legal loophole by obtaining a doctor‚Äôs recommendation, purchasing unregulated, untested marijuana on the black market, and then using the recommendation to bypass drug tests.

‚ÄúIt‚Äôs just absurd to think that anybody could go would pay $250 a month,‚ÄĚ said Jeffry Sanford, a medical marijuana advocate. ‚ÄúNow, you can go spend $250 a month for your prescription. Other people choose to go on the black market and buy a quarter pound of marijuana for $500‚ÄĒ and that‚Äôs for raw materials.‚ÄĚ