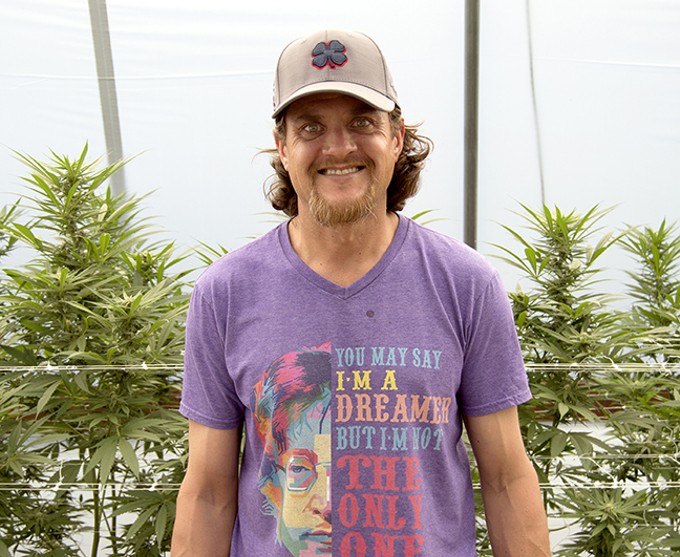 For many people living with a chronic disease, medical marijuana is a last-ditch effort, Ruben said. When new patients trudge through his door believing they’ve exhausted the gamut of treatments, he prescribes something different: hope.

“Instead of them going to a doctor who’s giving a grim prognosis, I’m trying to educate them and inform them what their different options are,” said Ruben. “It’s very empowering. And it starts to give them some faith in themselves that they can manage other areas of their lives.”

Today, the company employs more than 65 people, which range among a chemist who monitors their products for quality to a head grower who earns about $100,000 annually.

Ruben said he’s thrilled to offer a legitimate job to people who started their cultivation careers working on the black market. He promotes from within and will award cash bonuses to any employee who brings home good grades at college-level classes.

Investing in his employees is an investment in Desert Bloom, he said.

In April 2016, they grew the operation by opening a marijuana processing warehouse. Their first harvest was July that year.

On any given day at Desert Bloom’s nondescript facility at an undisclosed location, employees coming on and off shift share pleasantries and jokes among each other while floating through the cluster of cubicles and office space just inside the front door.

Little about the warehouse says you’re in factory that hosts about 5,000 pot plants. Maybe the two plastic cannabis shrubs flanking the waiting room couch hint at their business model. A better clueâ€”the dank aroma of marijuana plodding through the air.

Ruben, 41, was raised in Sonoita and graduated from the Gregory School, a college preparatory high school on Tucson’s northeast side. From 2004 to 2006, he attended the University of Arizona, studying pharmacology and toxicology.

He’s a wiry guy with a firm handshake. His baritone voice dances about with a welcoming canter. He’s sharp as a Fifth Avenue bespoke suit; there’s a fire in his eyes that speaks to his education, confidence and contentment.

He’s the type of person that people like to be around.

Throughout his late teens, Ruben spent a few summers in San Francisco working as a lab technician at Shaman Pharmaceuticals. The Bay Area company developed medicine by combing rainforests around the world, while tapping local populations for natural medicinal remedies used in the region.

“It was an amazing concept,” said Ruben. The company, he explained, had about 80 ethnobotanists who were traveling the world asking indigenous medicine men how native plants helped cure certain ailments. One remedy Shaman was working with had been curing AIDS-like symptoms for generations, he added.

Ruben said time and again, Shaman was denied FDA approval to bring their work to the marketplace. The company went bankrupt in 1999.

“But that was certainly an experience that got me interested in plant medicine, which shaped how I view plants, the active compounds in them and holistic medicine in its entirety,” he said.

Concurrently, he spent almost 20 years at Healthcare Southwest Inc., a Tucson-based mental health and pain management medical group. At its summit, the company worked with half a dozen healthcare providers working with patients throughout Southern Arizona.

Ruben held an administrative position at Healthcare Southwest, where he handled the insurance end of care for patients as well as various financial issues.

“Having worked in healthcare, and particularly in pain management, I had first-hand experience with the toxic effects of opiates and other psychotropic medications,” Ruben said. “It’s my belief that there’s a better way to do things.”

In 2010, Ruben became heavily involved with the statewide push to legalize medical marijuana. After voters passed the Arizona Medical Marijuana Act, known as Proposition 203, he was part of the rulemaking process, watching its development closely.

Ruben was at the ready with his distributor application by summer 2011; naturally, Desert Bloom was one of many businesses in Arizona stymied when former Gov. Jan Brewer filed a federal lawsuit against the ballot measure. Brewer dropped her lawsuit in January 2012, and gave the OK to the state health department to begin issuing licenses.

And this wasn’t the first time Ruben would watch the Legislature balk at what voters wanted. In 1996, he voted for the ballot initiative that allowed doctors to prescribe medical cannabis. Lawmakers ultimately rejected implementing the voter-approved measure.

The long-fought battle over medical marijuana shaped Ruben’s political attitude, he said. Seeing elected officials reject the will of the people can make someone distrust the Democratic process and adopt a counter-culture approach.

It’s also been a wake-up call. The tug of war prompted Ruben to become more politically active by developing relationships within Arizona’s system. As a licensed medical marijuana distributor, it pays to maintain a professional and transparent practice, he said. And to be in business for the right reason.

“That’s won us many friends and supporters in the political crowd,” he said. A family feel for

The goal was to help shake their customers’ dependency on toxic pharmaceuticals, Ruben explained. When appropriate, they also began to promote a nurturing lifestyle including eating healthy whilst recommending a patient attend religious/spiritual services or take up exercising.

“I think that the psycho-social factors associated with people’s health are largely overlooked,” Ruben said, adding people living with a chronic illness don’t fare as well if they’re isolated or inactive.

People who get out and live can overcome the depression linked to disease, he said. “A lot of people need that boost to keep them from getting down on themselves.”

Although Ruben was concerned about how his new company would be received, his shop quickly blossomed into more than just a pit stop for “potheads.”

He said not only are their products of high quality, Desert Bloom’s regulars dig the vibe.

Prescribing the best treatment for patients is trial and error, Ruben explained. But his customers take the lead in their treatment plan. Worst-case scenario, a medical marijuana patient who takes too large a dose may feel uncomfortable for a short amount of time.

That pales in comparison to the side effects of pharmaceutical treatment, he added.

Many new patients will come to the shop with very little information from their prescribing physician. And for those customers, the staff will get to know their clients in order to get them the best medicament, which can happen organically over time. The dispensary also has a cannabis nurse on staff for consultation.

Ruben isn’t shy about the personal relationships he’s developed with his clientele. When one of his regular customer’s 2-year-old child died, Ruben found the family a survivors’ support group in town. He’s honored and grateful to truly connect with people, and has made plenty of “friends for life.”

Throughout the years, they’ve had dozens of success stories in pediatric patients and folks living with debilitating conditions, Ruben said. Just last year, Desert Bloom took on a patient, Christopher, who is living with a severe case of Autism Spectrum Disorder. Christopher is a non-verbal young man who tends to self-harm to express feelings of frustration or discomfort. He was prescribed a CBD tincture and one THC gel cap daily before bed. Although the treatment hasn’t cured Christopher’s symptoms, within weeks his violent outbursts had practically disappeared and he no longer takes anxiety medication. These Mary Jane miracles highlight Ruben’s work.