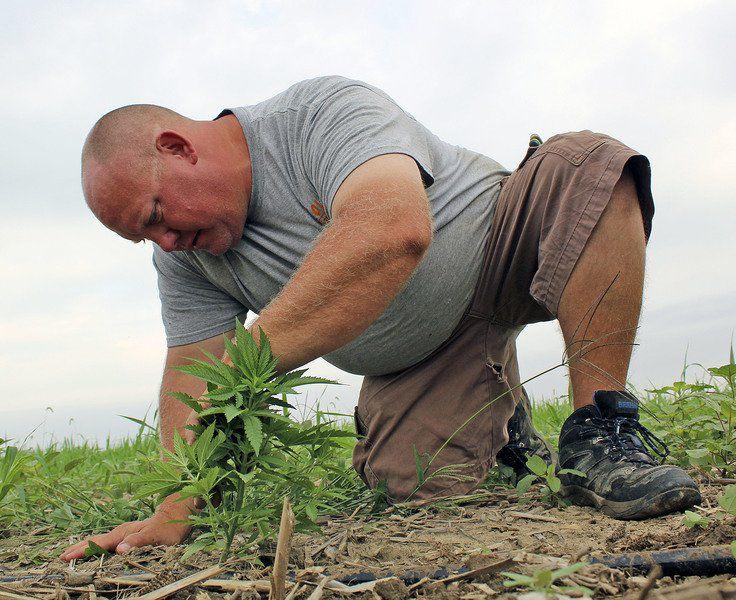 NEW PARIS â€” Spread throughout the New Paris and Millersburg areas are five large hemp fields all owned and operated by Aaron Rink, a sixth-generation corn and bean farmer.

According to the Purdue University School of Agronomy, there are currently only around 100 outdoor hemp growers in Indiana, with each grower averaging approximately 30 acres of crop, making Rinkâ€™s 400-acre hemp production operations one of the largest in the state.

Started in September 2018 by Rink, Will Weeber and brothers Scott and Matt Mast, the farm now is preparing to finish its first season, with a positive outcome anticipated.

Hemp used to be a controlled substance in the United States, but the 2018 Farm Bill provides regulations that allow farmers to grow it. Indiana passed its own law, Senate Bill 516, earlier this year that regulates the growing of hemp in the state.

Rink came up with the idea of growing industrial hemp early last year when he decided to move away from traditional agriculture and explore newer and growing markets in farming. Rink made the move in an effort to increase his profits, noting that he saw hemp production as a way to raise his income.

Weeber mentioned that because many private, family-run farms are struggling in todayâ€™s agricultural climate, new markets might provide farmers with viable options to remain in operation.

â€śFamily famers are closing up shop all over. Growing hemp could help many of those farms stay in business,â€ť Weeber said. According to him, hemp is a diverse crop, which makes it easy to market.

Speaking of this, Matt Mast said, â€śDifferent uses are still being discovered.â€ť

In addition to being used in the production of rope, hemp can be used as an alternative to both plastics and paper. CBD oil may also be extracted and used as a mild pain reliever and to treat anxiety, among other things.

The operation that Rink heads is primarily focused on producing CBD oil, and because of this, Rink and his team have grown shorter plants that provide more surface area to the leaves, which is expected to allow more CBD oil to be extracted. On Rink’s farm, hemp plants have been planted farther apart, allowing them to remain relatively short. According to Rink, many famers who seek to grow larger hemp plants plant seeds close together, and by doing this, the plants grow taller to avoid being shielded from the sun by their neighbors.

Rink added that as the plant continues to diversify in uses, he expects the demand for it will go up significantly.

Bruce Kettler, director of the Indiana State Department of Agriculture, believes that the industrial hemp industry will certainly grow.

â€śItâ€™s a new crop and a new product, so there are lots of opportunities there,â€ť Kettler said. â€śI have no doubt in my mind that this industry will grow.â€ť

According to Rink, education is another important aspect of hemp production growth. According to him, there is a stigma about hemp that has plagued the industry.

â€śMany people seem to think that itâ€™s marijuana. But itâ€™s not,â€ť Rink said. â€śHemp only contains 0.3 % THC. So, itâ€™s never going to get you high or have that intoxicating effect.â€ť

Rink also believes that as larger companies and corporations learn more about hemp and its diversity, they will want to be at the forefront of that industry, thus boosting demand.

â€śA CVS representative has already contacted me about buying a large amount of our hemp,â€ť Weeber said.

On Sept. 21, Ben Hartman of Goshen’s urban farm, Clay Bottom Farm, will host a one-day workshop for small-scale growers at the farm on how to grow CBD hemp.

The farm grew 100 hemp plants this year, according to Hartman.

“This year we’ve put a lot of effort into learning this new crop (Indiana legalized production in May), and our conclusion is that there is incredible potential. While there is a steep learning curve, it’s a manageable climb,” Hartman wrote in an email notice.

There is a cost to participate. Information can be found at claybottomfarm.com.