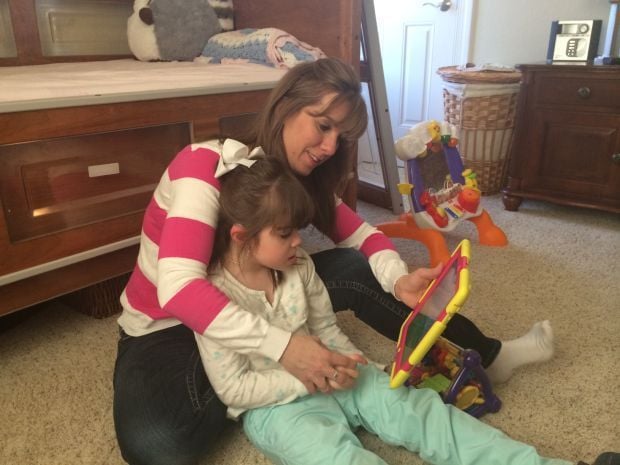 Sally Schaeffer plays with her daughter, Lydia, at their Burlington home on March 12, 2014. Lydia, who suffered from a rare seizure disorder, died about two months later. The Schaeffer family is continuing to work to bring awareness to the disorder.Â 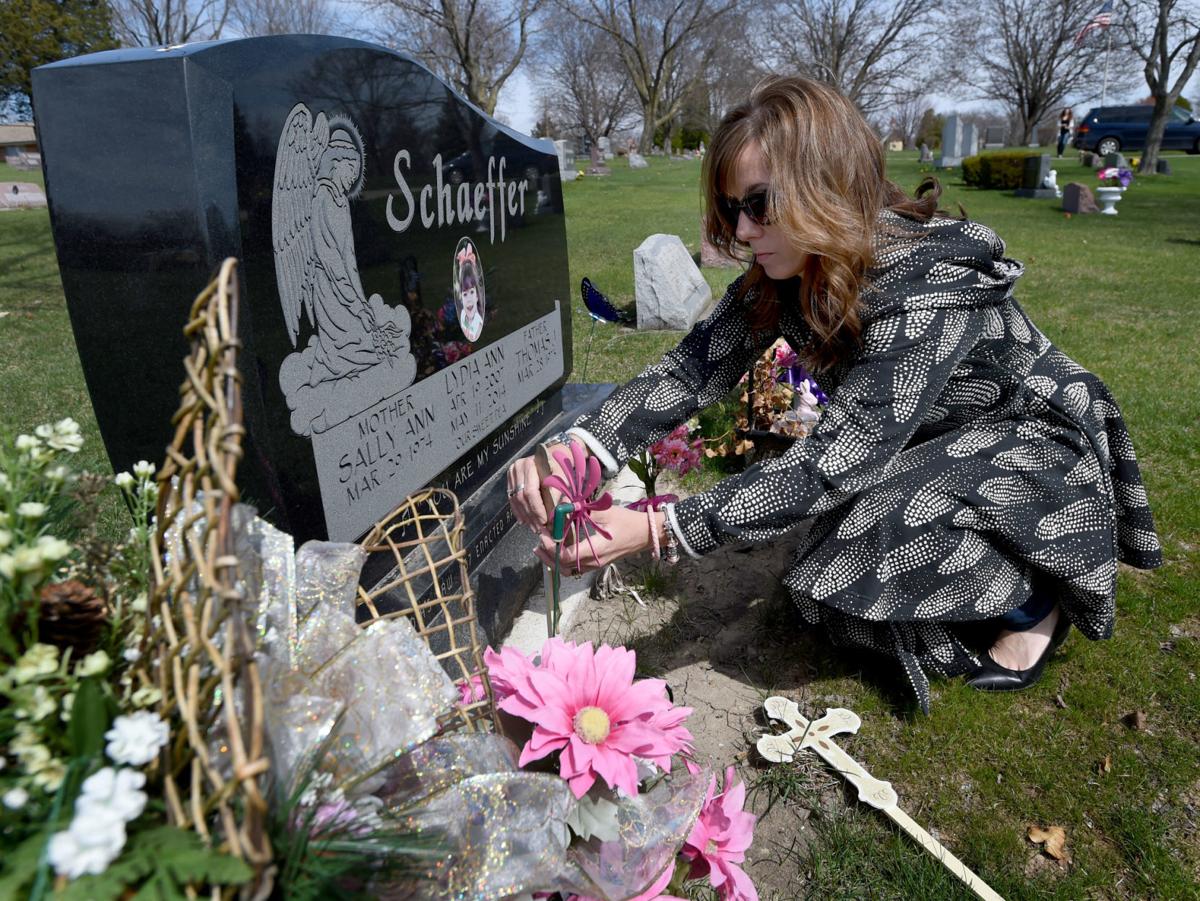 Sally Schaeffer visits the gravesite of daughter, Lydia, in Burlington in this 2015 file photo. Schaeffer’s daughter Lydia, suffered from a rare form of epilepsy that results in numerous seizures during her sleep. Schaeffer has since teamed with the family of Actor Cameron Boyce, who died earlier this year, to bring more awareness to epilepsy.Â 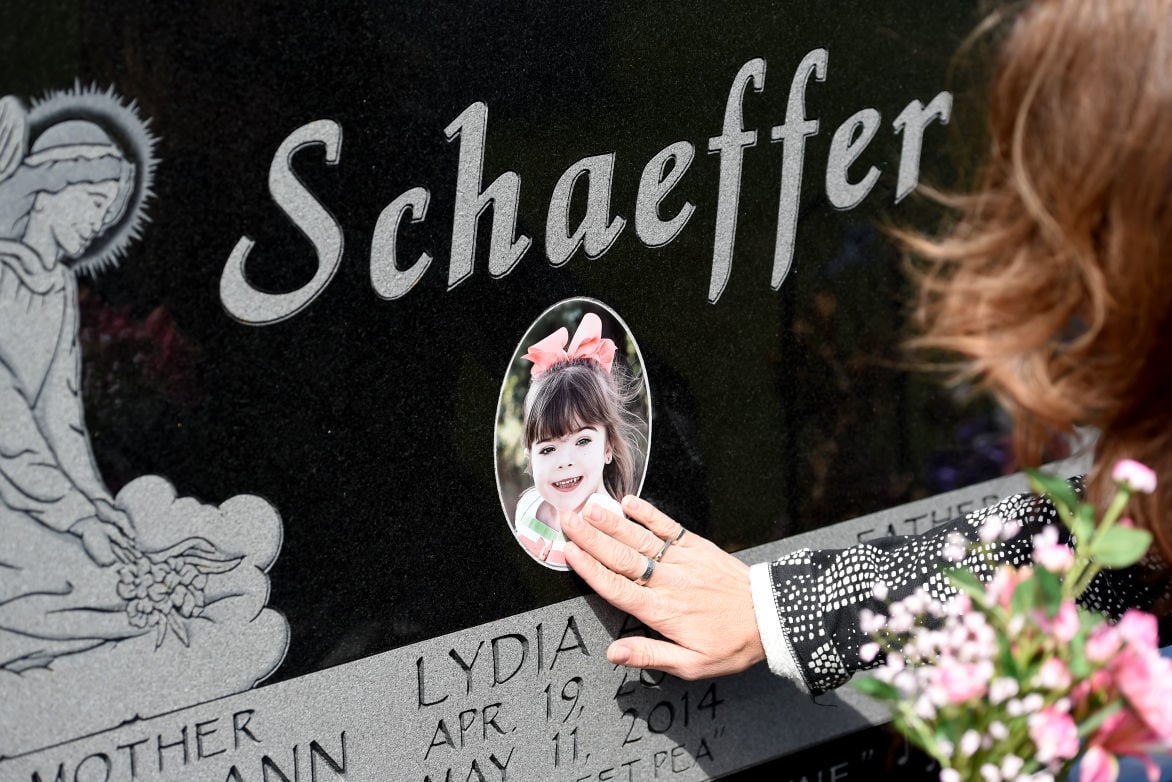 Sally Schaeffer touches a picture of her daughter, Lydia, as she visits the gravesite in St. Mary’s Cemetery in Burlington in 2015. Lydia died from SUDEP (Sudden, Unexpected Death in Epilepsy). Schaeffer has since teamed with the family of Disney actor Cameron Boyce, who died earlier this year, to bring more awareness to epilepsy.Â

BURLINGTON â€” After spending years advocating for epilepsy patients to have access to cannabidiol (CBD oil) for controlling seizures, a Burlington family is taking their story and epilepsy awareness nationwide, teaming with the parents of a young Disney actor who died earlier this year.

Sally and Tom Schaeffer fought alongside other Wisconsin families to pass Lydiaâ€™s Law, a state bill named after their daughter Lydia who died on May 11, 2014 at age 7 from sudden, unexpected death in epilepsy (SUDEP).

Later that month, the cannabidiol bill was signed into law. Lydia had a rare form of epilepsy, which caused her to have multiple seizures in her sleep.

Now, Sally Schaeffer is the director of the SUDEP Institute at the Epilepsy Foundation, where she is working to spread awareness and raise funds for research into epilepsy and SUDEP.

That awareness campaign is now receiving national, even international attention, thank to the parents of a young Disney Channel actor, Cameron Boyce. The Boyces have teamed up with the SUDEP Institute to raise awareness about the condition that killed their son earlier this year.

Schaeffer said epilepsy is the most underfunded condition for research in spite of it affecting 3.4 million people, which translates to roughly 1 in 26 people. Many people are unaware that seizures can result in death though 1 in 1,000 people die from SUDEP.

That is why she reached out to the Victor and Libby Boyce, the parents of actor Cameron Boyce who starred in Disney Channel series such as â€śJessie,â€ť â€śDescendantsâ€ť and â€śGamerâ€™s Guide to Pretty Much Everything.â€ť Boyce died in July 6 at the age of 20 due to a seizure in his sleep. Now, Victor and Libby Boyce have partnered with the Epilepsy Foundation to spread awareness of epilepsy and SUDEP.

We can’t do it without you. Support local journalism with our BEST DEAL EVER!
Loading&hellp;

Thanks for being a subscriber.

Keep reading for FREE!
Enjoy more articles by signing up or logging in. No credit card required.

The Boyces and Schaeffer appeared on â€śGood Morning Americaâ€ť on Nov. 13, during which they played a public service announcement recorded with Boyceâ€™s family and friends for the â€śK(no)w SUDEPâ€ť campaign.

The Boyces said their son had his first seizure when he was 16.

Since the Boyces became involved with the campaign, Schaeffer said the foundation has received press coverage from the British newspaper The Daily Mail and from â€śEntertainment Tonight,â€ť â€śAccess Hollywoodâ€ť and other outlets. Because Boyce had a large youth following, Schaeffer hopes the campaign will be able to reach young people.

â€śThat is something we want to work on is the youth living with epilepsy,â€ť said Schaeffer. â€śWe want them to know about SUDEP so they know how to avoid their epilepsy triggers.â€ť

Schaeffer said that working with the Epilepsy Foundation and families like the Boyce family have helped her on her own journey after Lydiaâ€™s death.

â€śWhen you lose someone you love, especially a child, you never move on. But, with working with the Epilepsy Institute and SUDEP, itâ€™s helped me move forward,â€ť she said. â€śThere is no doubt my family misses her every day but weâ€™ve always had the mindset that we want to help other families.â€ť

To learn more about SUDEP and see the public service announcement from Cameron Boyceâ€™s family and friends, go online to: epilepsy.com/learn/early-death-and-sudep/sudep

“The Last of Ike”

We Will Never Forget

Blowin’ in the wind

â€śWhen you lose someone you love, especially a child, you never move on. But, with working with the Epilepsy Institute and SUDEP, itâ€™s helped me move forward.â€ť Sally Schaeffer, Burlington resident

“When you lose someone you love, especially a child, you never move on. But, with working with the Epilepsy Institute and SUDEP, it’s helped me move forward.”