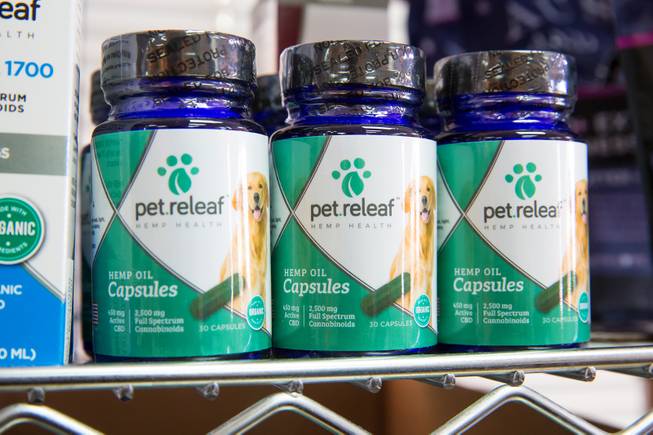 A look at some of the various CBD products for pets that are availabe at Healthy Tails pet store Tuesday, Sept. 3,Â 2019. 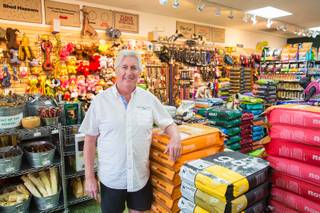 Most customers werenâ€™t interested in one of the bakeryâ€™s doggie sâ€™more treats, but rather, it was a run on perceived anxiety-reducing pet CBD, or cannabidiol, products ahead of a busy Fourth of July fireworks weekend.

â€śThere are things that just move and things that fly off the shelf,â€ť said Frank Shaw, co-owner of Three Dog Bakery. â€śIncreasingly, CBD is flying off the shelf. We were sold out of a product called Chill Out (a hemp-based chewable) weeks in advance.â€ť

As the marijuana acceptance revolution continues in America, pets are being included in the movement.

While big-box pet stores like PetSmart and Petco offer some hemp-based products, they donâ€™t sell any containing CBD oil. A number of smaller stores around the Las Vegas Valley, however, do carry CBD products, including Shawâ€™s store, Healthy Tails, The Wagging Tail, and Bogartâ€™s Bone Appetit.

At Three Dog Bakery, Shaw said, a one-month supply of any of the CBD products offered at the store would cost from $40 to about $75. There are no restrictions, he said, on who can purchase the products.

â€śWe were probably one of the first stores in the valley to sell (CBD products),â€ť said Mike Lay, co-owner of Healthy Tails. â€śThese products are insanely popular. When we first brought these products in, I admit I was a little skeptical. I was wondering if it was snake oil.â€ť

It wasnâ€™t long before Lay became a believer in CBD. He now uses CBD on his own pets.

â€śIâ€™ve seen the proof in the pudding,â€ť Lay said. â€śMostly, these products are really good at being anti-inflammatory and good for anxiety. Those are the two biggest things and the two things I get the most questions on â€” anxiety and hip and joint pain.â€ť

As attitudes around the country continue to evolve on marijuana â€” CBD, derived from the hemp plant, does not contain intoxicating levels of THC â€” pet owners seem to be more and more willing to offer CBD products to their dogs and cats.

â€śEssentially, CBD affects all mammals the same way,â€ť said Steve Smith, founder of Pet Releaf, a Colorado company that supplies CBD products to several Las Vegas-area pet stores. â€śIt was tough when we were starting out. They were throwing us out of stores because they just assumed we wanted to get dogs high. We had stores that were literally getting ready to call 911 on us when we went in to pitch our products.â€ť

Smith, who was in Las Vegas last month for the SuperZoo pet retailer trade show at Mandalay Bay, said some of the people who turned him away initially are now some of the companyâ€™s best customers.

From 2017 to 2018, Smith said, Pet Releaf grew fivefold. The company, which maintains its own hemp farms in Colorado, was launched in 2014.

â€śItâ€™s been quite a sea change over the last five years,â€ť Smith said. â€śWe have four or five accounts in Las Vegas that do very well, including Healthy Tails and Bogartâ€™s. Pet parents are becoming more comfortable with it, but itâ€™s still only about 37 percent of pet parents that have actually tried any type of CBD product in the U.S.â€ť

While Pet Releaf has its merchandise in more than 6,000 independent pet stores nationwide, Smith said Las Vegas has been one of its top markets.

â€śVegas pet parents tend to be on the higher end of the educated pet parents spectrum,â€ť Smith said. â€śYou have to be an attentive pet parent in Las Vegas because it might be 110 degrees outside and you can put your pet in a dangerous situation pretty quickly. We feel really bullish about the Las Vegas market today and into the future.â€ť

However, store owners warn that not all pet CBD products are created equal and some have been known to exaggerate health benefits. According to the American Veterinary Medical Association website, the â€śavailable scientific evidenceâ€ť pertaining to the use of CBD products for animals remains limited.

Hemp, however, was removed from the definition of marijuana pertaining to the federal Controlled Substances Act as part of the 2018 Farm Bill.

In Nevada, dispensaries that sell marijuana are not allowed to sell CBD products marketed for pets.

â€śWith CBD, weâ€™re at the same place where we were with Tylenol in the early 1980s,â€ť Shaw said. â€śIt didnâ€™t take long before that became dominant in the marketplace. I think thatâ€™s what weâ€™re about to see (with CBD). I would say CBD sales account for between 5% and 10% of our business.â€ť

Smith doesnâ€™t think it will be long before major chains are selling CBD items, a step that would further enhance awareness of the products.

â€śItâ€™s still kind of a novel thing,â€ť Smith said. â€śWeâ€™re actively speaking with those guys (Petco and PetSmart) and I think, before the end of the year, weâ€™re going to see CBD products on their shelves in some states.â€ť

« Smokable Hemp For CBD Is A Thing, But Users Can Still Get Busted By Police – The Fresh Toast Patients follow pain, hope to Thailand’s â€“ and Asia’s â€“ 1st marijuana clinic – Coconuts »