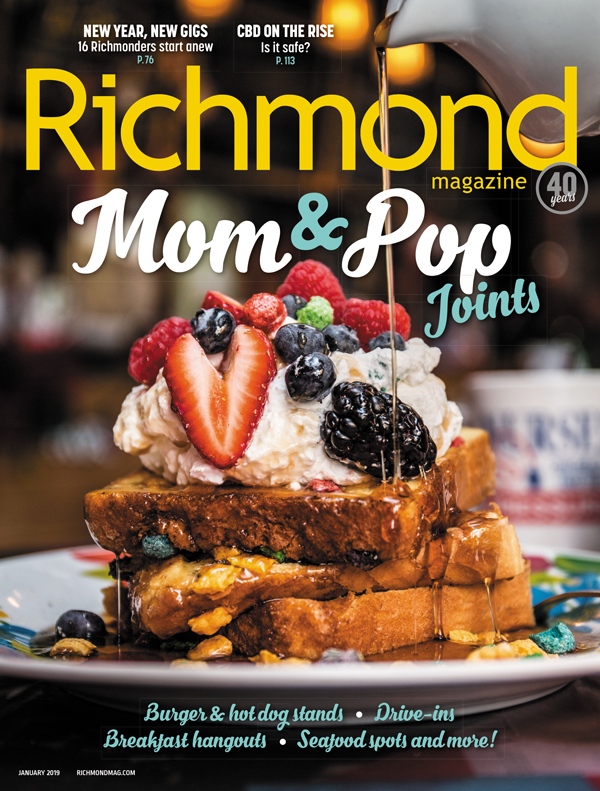 64 / Counters of Comfort With some help from our readers, we traveled off the usual grid to track down mom-and-pop joints, strip-mall spots and hole-in-the-wall eateries worthy of an adventure. By Eileen Mellon, Piet E. Jones, Nicole Cohen, Genevelyn Steele and Susan Winiecki

72 / Freedom Rider Theresa Walkerâ€™s name is less familiar than that of her late husband, the Rev. Wyatt Tee Walker, but her legacy of quiet activism represents the critical role women played in the civil rights movement. By Samantha Willis

76 / New Year, New Start Maybe youâ€™ve been itching to take up a different hobby, nurture a latent skill or instigate change. To help inspire those creative reinventions, we highlight 16 Richmonders whoâ€™ve taken the idea of starting something new and run with it.Â

106 / Stages of Interest The University of Richmondâ€™s Joanne Kong is a world-class musician and an advocate for veganism. By Taylor Mills

113 / The Cannabis Controversy CBD and similar products are popular treatments for pain, anxiety and other ailments, but can you trust whatâ€™s in them, and are they legal? By Eileen Mellon

24 /Â Competition Designs intended to spark conversation about the future of Monument Avenue will soon go on display.

26 / Books What are the regionâ€™s new and returning elected officials reading?

30 / My TakeÂ Marcus-David Petersâ€™ death points to a need for better handling of mental health crises. By Amanda Long and Megan Sharkey

32 / NewsÂ A partnership between nonprofits and East End schools works to counter the effects of trauma.

39 / Datebook Mural, mural on the walls, â€śSister Actâ€ť on stage, Panic! at the Disco, Umphreyâ€™s McGee at The National and Vance Gilbert

44 / Spotlight An exhibition recalls the civil rights movement in Richmond and the people who saw it happen.

46 / Profile The seldom-told story of a businessman who made deals to help Jewish people avoid persecution. Â

139 / PurveyorÂ The duo behind Pamplin Poultry