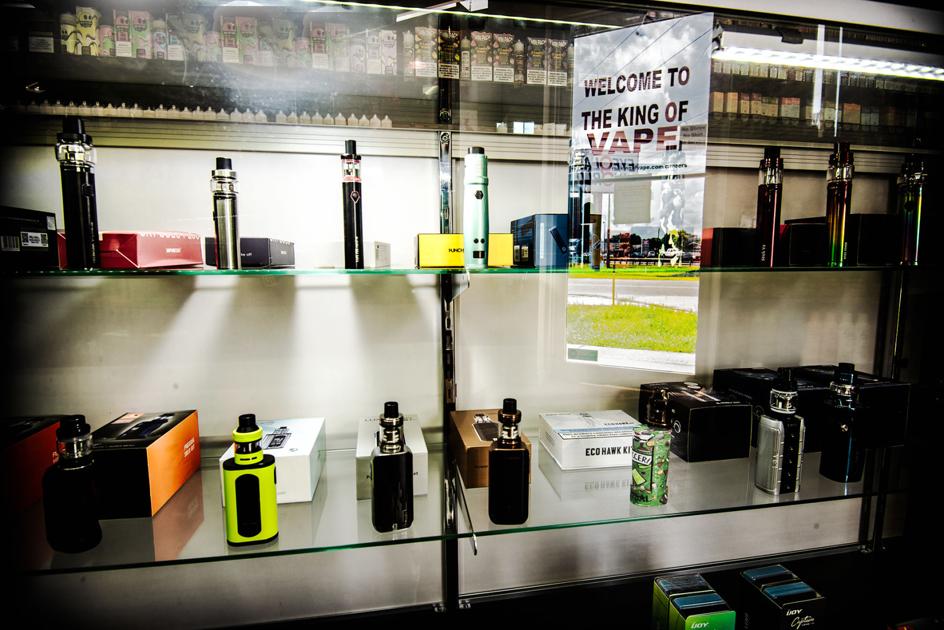 Synthetic marijuana is a cheap street drug where mind-altering chemicals are sprayed on dried, shredded plant material so they can be smoked or sold as liquids to be vaporized and inhaled in e-cigarettes and other devices. The drug often delivers a more intense high than natural marijuana and has been associated with a rising number of seizures and deaths.

‚ÄúA lot of people get hit really wrong where they‚Äôre completely immobile,‚Äù said Justin Sullivan, co-owner of Serenity Vape in Port Charlotte. ‚ÄúIt‚Äôs like when you smoke marijuana for the first time where you just sink into the couch and can‚Äôt do anything. That happens any time you smoke that stuff.‚Äù

Sullivan, who sells CBD vape products in his store, said he‚Äôs heard of local people unknowingly taking the drug instead of marijuana, though not in an alleged CBD product.

‚ÄúI didn‚Äôt know it was popping up in CBD, which is not good at all,‚Äù he said. ‚ÄúIt puts a really bad light on a really helpful drug.‚Äù

The AP requested information from law enforcement and found officials in nine states reported positive hits of synthetic marijuana in CBD products. Florida was not one of those states, but it was a state where synthetic marijuana was found in the independent lab test the AP commissioned.

In North Port, spokesperson Josh Taylor said the police department is not currently planning any testing of CBD products.

‚ÄúRight now, things are evolving in this market,‚Äù he said. ‚ÄúIf we now realize that a bunch of people are accidentally smoking synthetic marijuana, then yes we would be concerned. This may be something we need to look at. I think it‚Äôs a reminder for folks that many of these products are not being fully regulated. You should work to have absolute trust in whatever you are putting in your body.‚Äù

Dr. Joseph Ravid, an independent physician in Punta Gorda, said he‚Äôs not surprised to hear of synthetic marijuana in CBD products and expects to see the trend carry into the area before long.

‚ÄúWhen you have an unregulated material that is extremely lucrative, there are always going to be ways to try and profit the most return on your investment,‚Äù he said. ‚ÄúIt‚Äôs a lot cheaper to have synthetic marijuana put in instead of the real hemp oil.‚Äù

In his office, Ravid sells pharmaceutical-grade CBD for patients with anxiety, insomnia, epilepsy, and mild to moderate pain. He started selling the products because he was seeing a lot of patients buy lower quality versions that weren‚Äôt giving them the full benefit, he said.

‚ÄúIt is a little more expensive, but you get what you pay for,‚Äù he said.

Without testing the product, he said there‚Äôs no way to tell what‚Äôs really in it.

‚ÄúIt‚Äôs important if you are going to get CBD oil, you get it from a reputable source,‚Äù Ravid said. ‚ÄúYou can go online and get it from wherever. You can go to your local Circle K and your pet grooming place and you can get yourself CBD oil. Everybody‚Äôs selling it… Unfortunately because there‚Äôs no laws that are governing the sale or possession of CBD, it‚Äôs the wild west out there right now. It‚Äôs a free for all.‚Äù

Justin Sullivan said he and his family always test out the items in their store before selling them. He‚Äôs bought CBD products before which turned out to actually contain little to no CBD.

‚ÄúThe last thing I want is to start ripping off my customers because I‚Äôm getting something and don‚Äôt know any better,‚Äù he said.

They also only stock products from companies that have lab testing done and make the results available to the public, so consumers know what they‚Äôre buying.

‚ÄúIt should be posted on the CBD company‚Äôs website if they have the labs done,‚Äù Justin Sullivan said. ‚ÄúAnd if not, then there‚Äôs probably something going on, or they‚Äôre such a new company that they can‚Äôt afford it yet. But it‚Äôs something that every company should have done and should have on their website or within their packaging.‚Äù

Still, his father John Sullivan, was concerned to hear the news about the synthetic marijuana.

« Heritage Cannabis and Empower Clinics team up for production of hemp CBD oils. – Proactive Investors USA & Canada You can now buy CBD oil leggings, here’s what you need to know – Body and Soul »