How This Techie Became An Advocate For Marijuana 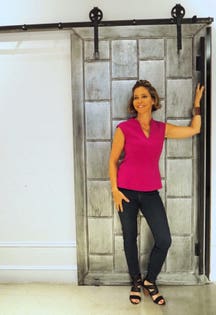 Tech consultant Pamela Hadfield and her serial entrepreneur husband Mark were in the midst of launching their second tech startup when one night over dinner, a close friend suggested she try marijuana to treat her persistent migraine headaches.

‚ÄúI just kind of rolled my eyes, [and thought] ‚ÄòYeah, right,‚Äù the UX designer recalls of her initial skepticism and the fateful dinner in late 2013 that changed her life.

At the time, the couple, Silicon Valley veterans, were deep into developing a telemedicine platform for the traditional market that would connect patients to doctors via video.¬Ý But after Hadfield hesitantly obtained her medical card and later stepped into her first marijuana dispensary in San Francisco where she met a knowledgeable ‚Äúbudtender‚Äù who helped her find the right combination of cannabis compounds to relieve her pain, she saw a major opportunity.

‚ÄúIt transformed my life. It was this amazing moment and I realized I had gotten it (marijuana) all wrong,‚Äù she says of the epiphany that sparked a new business idea, too.

In three months, with a regular regimen of a high CBD-low THC dose of cannabis, she was managing her pain. And in six months, she says the headaches that plagued her since she was 14 years old completely subsided. Not only was she able to stop taking the prescription painkiller Vicodin, Hadfield realized that other people like herself, who were curious about cannabis for health, had an infinite number of questions but not many options to find trustworthy answers privately and conveniently. With marijuana illegal under federal law, the newly lawful pot industry at the state level was and remains today a patchwork of ever-changing local policies and regulations. Clinical research on medical cannabis in the U.S. remains limited due to its classification as a Schedule I controlled substance and in addition, there are strict limits on advertising and marketing.

Access to reliable information became the problem, Hadfield and husband set out to solve after they spent six weeks retrofitting their original concept to focus on cannabis. In early 2014, the two launched HelloMD.

Since then, the digital healthcare platform has connected 100,000 patients to doctors and nurse practitioners in California, New York and Canada via a HIPAA compliant video-chat platform for cannabis consultations and product recommendations.¬Ý Its educational hub boasts a community of 500,000 unique visitors per month and 60% of its members reside outside of California. They come to HelloMD to share their queries and knowledge. The crowdsourced repository of answers, often addressed by medical professionals, brands and cannabis users around the world, earned the Q&A portion of the site the moniker ‚ÄúThe Quora of Cannabis,” when HelloMD was profiled by TechCrunch in 2016.¬ÝThe company, which is venture backed, has raised more than $9 million dollars since its inception.¬Ý

For 45-year-old Hadfield, who holds an MFA from New York’s School of Visual Arts, the transition from techie to cannabis advocate has been transformative and exciting

‚ÄúFrom the moment I put my big toe in it, I was a fish in water. I just loved the eccentricity. I loved the bootstrapping. I loved the creativity,‚Äù she says of building a new business in an industry that‚Äôs still being invented itself. But the mom of three daughters, ages 8, 10 and 12, admits the shadow of federal drug laws certainly gave her pause, especially in the early days of starting the company.

So far, the risks have paid off and Hadfield, whose long resume in user interface design includes projects for the United States Air Force, Sephora and LeapFrog, has comfortably stepped into the role of cannabis educator and activist. She’s even featured in new book out this fall: Road Map for Revolutionaries: Resistance, Activism and Advocacy for All (Random House), a¬Ý“guide for day to day¬Ý activism” which has earned early praise from Gloria Steinem.

What Hadfield is passionate about most is spreading the word about how cannabis can be used to improve overall well-being: from relieving chronic pain like her own debilitating headaches to easing stress to helping people sleep through the night.¬ÝSince she and her husband started the venture, 30 states have legalized medical marijuana with nine of them allowing recreational use.¬Ý¬ÝHelloMD is squarely focused on the broader wellness market. The global wellness industry which encompasses businesses including anti-aging, fitness, beauty, spas and mind-body related services was estimated to be worth $3.7 trillion worldwide in 2015 according to the Global Wellness Institute, a non-profit that tracks business trends in the field.

Given the momentum of the movement to legalize marijuana in the U.S. and coverage in the media like O, The Oprah Magazine,¬ÝGood Housekeeping and TODAY, Hadfield predicts 2018-19 will be the year women embrace cannabis for health and wellness.

“People are beginning to see or [have] friends telling them anecdotal stories of, ‘Oh my gosh,¬Ý I had this back pain and I didn’t take opioids, I took CBD…[and] this is also contributing to this wave of mainstream acceptance,” she told me.

HelloMD recently introduced e-commerce to the platform and a menu of curated of products like Kiva Confections‚Äô cannabis-infused chocolate covered blueberries and Foria vaginal suppositories for menstrual pain that can be delivered to customers‚Äô doors in California. ¬ÝThis month, HelloMD will begin a major push for sales and delivery of CBD products derived from hemp, a cousin of marijuana that has similar medical applications but does not face the same legal restrictions.

On a personal level, Hadfield says her own journey from marijuana skeptic to entrepreneur and evangelist, has made her more open-minded about the world.