Lee Ford and his father Danny Ford talk about the benefit and challenge of growing hemp, as one of 20 farms chosen in the state for the pilot year Ken Ruinard / Independent Mail, Anderson Independent Mail

Marijuana’s square cousin could grow into a $1.8 billion industry by 2020

Hemp farmer Lee Ford of Central shows off a cutting from a female hemp plant. Farmers like Ford can extract cannabis oil from these state-regulated plants for medicinal purposes.

CENTRAL â€” Lee Ford has been farming all his life, but he said tending to one of the state’s first legal hemp crops in nearly 50 years has been the hardest work he’s ever done.

“Right now, Sundays we’re out here, Saturdays,” he said. “I don’t know the last time we’ve had a day off.”

The cattle and hay farmer is in and out of his family’s 16-acre experimental hemp field in Central from sunup to sundown, weeding rows of theÂ plantsÂ alongside his father,Â Clemson coaching legend Danny Ford, and nephew,Â Jordan Ford.Â

Their hope: holding onto and helping their farmÂ thrive while contributing to an emerging $1.8 billion hemp industry.

Their challenge: overcoming steep up-front costs, a multidecade knowledge gap and enduring regulatoryÂ uncertainties. Hemp is theÂ close cousin to marijuana but does not cause a high when ingested.Â

The South Carolina Agricultural Department issued 20 permits in 2018 to farmers interested in cultivating up to 20 acres of industrial hemp. The pilot program will expand to 40 farms in 2019.

Nat Bradford, a produce grower in Sumter County whose family is perhaps best known for their heirloom watermelons and collards, said a South CarolinaÂ hemp industry is long overdue â€” and theÂ outpouring of support he’s received on social media shows many agree.

“I never had this many people come out of the woodwork patting me on my back for growing okra,” the Clemson graduateÂ said.

From outlaw to legal

Bradford and the Fords are among the first 20 South Carolina growers to put seed to ground this past spring, and come September they will be the first farmers in 48Â years to harvest hemp legally in the state.

They secured permission to plant the crop this past spring from the state Department of Agriculture, part of a pilot program â€” legalized in 2017 â€” for industrial hemp in the state.

Because hemp remains a controlled substance, in the same “schedule 1” category as heroin and LSD, the program is highly regulated. It was limited in 2018 toÂ 20 growers, each of whom wasÂ allotted a maximum of 20 acres and had to report the GPS coordinates of their fields. The program will grow to 40 growers and a maximum 40 acres in 2019. 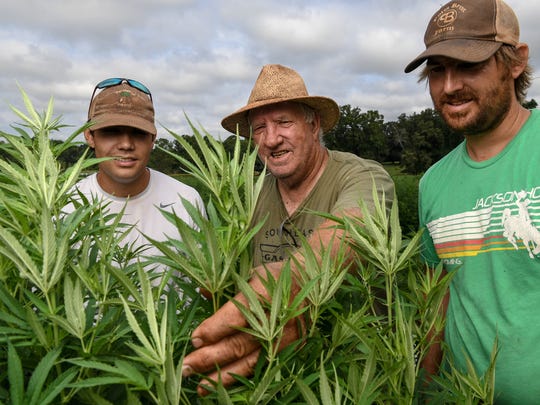 From right, Lee Ford, his father, Danny Ford, and his nephew Jordan Ford look for any plant problems this summer between cutting weeds among rows of hemp plants at the family farm in Central.

Despite the red tape, though, farmers want in: More than 160 applied this summer to be part of the program’s class of 2019, according to the state ag department.

The Fords and their friendÂ Tom Garrison, who runs the Denver Downs vegetable farm about three miles away, are growing female plants to extract medicinal cannabidiol, or CBD, from resin glands. CBD is aÂ substance widely lauded (and recently FDA approved)Â for its medicinal qualities.

Other South Carolina farmers, like Bradford, areÂ growing hemp for its seeds, which he says are high in protein and have an oil rich in omega-3 fatty acids.

“We are going from something that was outlaw, illegal, and it’s becoming legal,” Lee Ford said. “That basically means that we’ve got to pave the way. So everything we learn has got to be vetted. You’ve got to make the 50 extra phone calls, and we’ve got to make sure that what they are saying is correct.”

Because they are growing hemp for human consumption,Â these farmersÂ must plant their crop on land that has never been touched by insecticides and herbicides.

“These chemicals stay in soils a long time, even in trace amounts or parts per million,” Garrison said. “It has to be on virgin land â€” either on a hay field, or fallow or pasture.”

No one knows how much the plants might absorb chemicals in the ground, and the federal government has not yetÂ established any tolerances for pesticide residues, according to the state ag department.

Danny Ford works his way through rows of hemp with a weed trimmer. The Ford farm in Pickens County is one of 20 selected by the state Department of Agriculture to take part in the 2018 SC Industrial Hemp Pilot Program.

Garrison cleared an untouched 16-acre area of his vegetable farm off Clemson Boulevard in Pendleton to grow his hemp. The Fords’ fields were OK because they have only ever had cows and hay on their 174-acre farm.

“I’ve heard it described like it’s a liver in your body,” Danny Ford said. “(The plant)Â will filter everything in the ground, so they are afraid to put anything in the ground because the roots will bring those to the plant and then it wouldn’t pass the chemical testing when you get ready to harvest it.”

The upfront costs in irrigation systems and seeds from a largely untested supply chain (which, they have found, includesÂ disreputable suppliers) are another hurdle for growers.

The Fords said teamed up with Garrison to find a supplier and bought 27,000 seeds â€” a purchase they plan to avoid next year by planting cuttings of their best-performing hemp plants.

Denver Downs Farm owner Tom Garrison is one of 20 farmers in the state to get permission to grow hemp, and one of two in Anderson County.

“I’ve got a boatload of money sunk in this crop,” Garrison said. “I don’t think I’ve ever put this much money in a crop per acre basis.”

“We were sweating it back in April because our plant people fell through on us,” Garrison said. “So we had to scramble to get seed.”

For Lee Ford, though, the risk he and his father have taken is worth it if it leads to a high-yield cash crop down the road.

“We are all looking for more time with our families,” Lee Ford said. “More time to feel secure.Â It’s what everybody’s looking for.Â That’s really why we took such a big chance this year so that we can be secure in what we do next year.”

Because of federal law, there is a 50-year gap in (legitimate) hemp experience in South Carolina â€” no one knows for sure how these plants will react to current weather and soil conditions in the state.

“You are going to have to be out here every day and working in it.”

An early mistake: not arranging the hemp plants far enough apart to run a lawnmower between the rows. The Fords followed the five-foot spacing recommended byÂ seed suppliers from California, Colorado and Oregon, but those areas have less rain and fewer weeds.Â Â 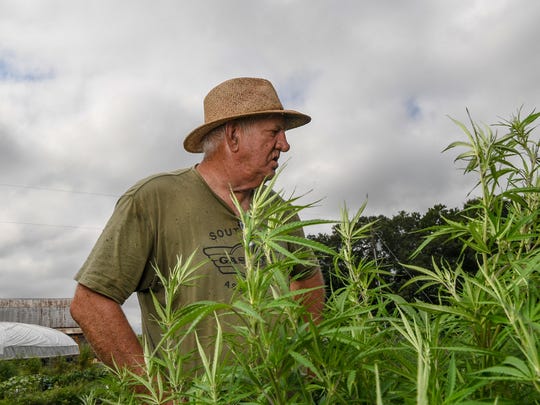 Danny Ford examines the hemp plants on his farm. Maintaining the plants is hard work, and the Ford family is out from sunrise to sunset clearing weeds from each row.

Bradford is keeping his efforts this year small and scientific: He is maintaining nine plotsÂ  on a half-acre plot with three strains of seed. His goal is to find a hemp seed that grows well in South CarolinaÂ â€” currently a complete unknown. If he and other farmers can crack that code, their plan is to share theirÂ knowledge with other farmers and to further adapt and breed better, more high-yieldingÂ strains in the next three or four years.

Bradford laughed when he described marijuana growersÂ and “pseudo-horticulturalists” emerging on his Facebook page to offerÂ tips on growing hemp. Similarly,Â Danny Ford said he’s had to politely decline offers of help from folks who used to grow marijuana.

“That’s dangerous,” he said. “It’s amazing howÂ back in the ’60s and ’70s, what all went around in our little community here.”

Hemp was a standard American crop up until World War II, especially during the war when Japanese troops occupied the Philippines and blocked hemp exports to the United States, said Lucas Snyder, founder and executive director of the South Carolina Hemp Growers Association. “Hemp for victory” newsreels encouraged farmers to grow the plant for rope and uniform production, he said.

“After World War II, we could get our hemp supply from overseas again, so production declined,” Snyder said. “Then in 1970Â with the Controlled Substances Act, hemp was classified as a schedule 1 narcotic.”

That along with widespread use of nylon rope all but ended hemp growing in the United States, he said.

Lee Ford, who works with his father Danny Ford growing hemp for oil at the farm in Central in July, looks at a small plant in the greenhouse.

The 2014 Farm Bill allowed states to study the hemp industry but provides no federal â€” i.e., state-to-state â€” standards for processing hemp, let aloneÂ selling it out of state.

“They’ve basically gone through and said each state do what you want, make your own laws and see how it goes,” Lee Ford said. “That’s where we are at at this point.”

South Carolina’s Industrial Hemp Program is a byproduct of that 2014 Farm Bill.

Cannabis is “marijuana” if its THC is above 0.3 percent; anything below that is industrial hemp, according to state and federal statutes.Â

To stay legal, the Fords regularly send samples of their hemp bushes to labs checking for the amount of CBD in their plants as well as the presence of THC, the psychoactive compound (tetrahydrocannabinol) that causes a high when people ingest the buds of marijuana.

“People know what’s going on, a lot of people are talking about it,” Lee Ford said. “Everywhere we go, people are asking where we are, when we are harvesting. They just want to know more.”

On Thursday, Feb. 1, 2018, the Cosmic Grind Coffee Shop on Church Street in Burlington, Vermont, started offering CBD hemp oil shots in their drinks. But don’t worry, CBD is a ‘non-psychoactive’ extract, not to be confused with THC in marijuana. RYAN MERCER/FREE PRESS