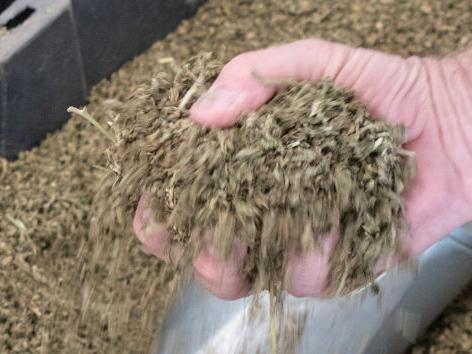 Evolving with the burgeoning hemp industry is sort of like putting one of those children‚Äôs swing sets together with no directions. But Matt Miles, shopping center, trailer park, grocery store and land developer, is going for it with the spirit of a dedicated father putting toys together on Christmas Eve.

Miles is the force within a venture called General Processing, located at B50 road and U.S. 50, a dozen miles north of Montrose. General Processing is the last link in the production chain for the emerging industrial hemp sector in the Uncompahgre River Valley. Now, the dozens of hemp farmers in the valley have a place where they can have their harvest processed and the CBD oil put on the market. Miles and his team have been working on the plant since he pulled the trigger on his new adventure in September of 2018. He plans to set the full operational wheels in motion on Sept. 27.

‚ÄúThere will be a lot of activity here at the end of this month,‚ÄĚ he says. That‚Äôs when the fleet of 36 specially equipped trailers, all painted red, will start hauling hemp biomass out of the fields and into sheltered bays at the General plant.

There, the trailers will be connected to dryers by huge rubber tubes for the process that begins the removal of the chemical that the hemp boom is all about ‚ÄĒ CBD oil or powder. That final product is touted as a remedy or symptom controller in maladies from arthritis to cancer.

‚ÄúI was the biggest skeptic around,‚ÄĚ says Miles, a burly guy with a clear business head and a quick laugh. ‚ÄúI didn‚Äôt believe all the hype. But I was exposed to some old guys whose judgment and integrity I trusted.‚ÄĚ

What Miles learned from his elderly friends was that CBD oil was a welcome part of their regimen in dealing with the illnesses, aches and pains of aging. And that was all he knew about the four-year-old industry, except that there were a lot of people, his neighbors and friends, who had decided to jump on the proverbial bandwagon and grow some ‚Äúgrass.‚ÄĚ

Did he ruminate on the idea of being an industrial hemp processor?

‚ÄúI knew nothing about marijuana, never even had a whiff of secondhand smoke,‚ÄĚ Miles says with a grin. But he is, without question, a quick study guy, who saw an opportunity and the chance be part of something really big and very special. Now he talks like a seasoned hemp industry pro.

‚ÄúI act quickly. It was obvious there was a boom ready to burst. So, Marci, my wife of 30 years and I took the plunge,‚ÄĚ he says. Perhaps it was his experience in the North Dakota oil rush that gave him the confidence.

Miles went to Williston, a town of 14,000 souls, which became a market three times that size during his stay. He was the first residential subdivision developer in the area.

‚ÄúI went to North Dakota to play not to lose,‚ÄĚ says Miles paraphrasing the sentiments of grid great Tom Brady. He didn‚Äôt, lose that is. But in 2013 he headed back to Colorado and Montrose. He became the real estate and build-out brains in the expansion of the Natural Grocers chain, developing 60 of its 150 units. Then his friends told him about hemp.

‚ÄúWhen I am looking at a project, I always look for something where there isn‚Äôt any competition yet. I like being the first guy in,‚ÄĚ he says.

Williston was taken by surprise in 2007, with the growth. There was no one doing anything to get ahead of the demand. The same thing is happening in Colorado, the leader in the hemp business, with more than 1,100 producers, to date, and only a handful of companies to process the product.

Miles started General on a low key, almost experimental basis with a small extractor. The system produced the first quality CBD oil on the Western Slope. That done, Miles started work on his 51,000 square-foot facility which goes into operation this month. But there are still questions without answers.

‚ÄúWhen we started last year we were in a quasi-legal business,‚ÄĚ Miles says. At that point industrial hemp was pretty much in the hands of the states. Colorado was a breakout state. Hemp growers operate only under regulation by the state agriculture department. There was a serious question mark over the heads of hemp farmers about federal regulations until the US Farm Bill was signed into law last winter by President Trump.

Even with the 2018 Farm Bill blessing, there was, and is, still no definition to the regulations that may or may not be needed from the Food and Drugs Administration. The FDA is moving at a snail‚Äôs pace in developing the regulations, while at the same time already busting chops in the distribution chain for alleged misleading ads regarding the efficacy of CBD oil as a medicinal product.

To put it bluntly at this point in the toddler stages of the industry, there is no normal, no status quo, no average, no history, and certainly no way to avoid mistakes. Miles points to some green bins that used to be mounted on some John Deere cotton pickers.

‚ÄúWe thought those bins would work pretty well in our early hemp handling process. But, they didn‚Äôt,‚ÄĚ Miles says. The bins are for sale. A half dozen giant filter cores sit on pallets, ‚ÄúThose didn‚Äôt work either, they couldn‚Äôt handle the temperatures.‚ÄĚ

The extractor that the company started with last year is now obsolete.

A lot of what is being done is coming from the Mother of Invention, since the need for some systems exists, but hasn‚Äôt been filled. Miles shows a rather expansive, raised metal floor in one of the three buildings at General. More than 2000 square feet of cold rolled steel plate has been laid over a steel framework a foot and a half off the warehouse floor. The steel deck is covered with louver-like pieces of metal, giving the platform the look of the hood of a customized ‚Äė51 Oldsmobile.

The structure is a big drying floor, where warm forced air comes up through the louvers in the floor to dry the freshly harvested hemp. Miles and his crew built the dryer, designing as they welded.

Drying the hemp material is an important part of the process no matter how it comes from the grower or which process you use. Hemp that is not properly dried is basically useless for someone looking for a high quality CBD oil product. In General‚Äôs process, the ‚Äúbiomass‚ÄĚ (in this case the buds or flowers and some leaves) is put through an extraction process that pulls out the crude CBD oil. To get to the medicinal or cosmetic stage, further distillation is required. This is the high tech part of the process.

The refining distillation requires the crude oil to be mixed with ethanol that is chilled to -55 degrees Fahrenheit. The mixture is pushed through a processor that separates the oil from the alcohol and removes impurities at a molecular level. The ‚Äúcleaned‚ÄĚ alcohol returns to the system to be recycled many times. The CBD product goes on the market. General only produces CBD distillate, not ‚Äúhemp oil.‚ÄĚ

The final distillation takes place in a clean room with some seriously redundant safety systems built in. That is because with cold ethanol running through the system all the time, catastrophic fire is a high risk. Alarms, suppression, and rapid personnel removal provide the safety edge.

What do you know about hiring a chemist?

It became evident early on that Miles was going to need a chemist for his new business.

‚ÄúWe got lucky,‚ÄĚ Miles says of the headhunt that quickly hooked him up with Allan Felix. Felix was in the pharmaceutical industry and he grew up in Carbondale. Felix is now overseeing the General Processing chemistry. Among other things, he must constantly monitor things like THC levels, oil properties, and the chemistry of the distillation systems.

‚ÄúHemp absorbs everything when it is growing,‚ÄĚ says Miles. ‚ÄúPesticides, heavy metals, and other things can create problems for the final product. So we have to be constantly testing.‚ÄĚ

General uses a three-stage testing process because, Miles says, they want to be absolutely certain of the purity and efficacy of our product. It tests both the raw produce and the product a minimum of three times along the way, and then it tests the finished product in the distillate form ‚ÄĒ twice.

When a producer brings a load of hemp, General requires a certificate from an independent lab that indicates the proper THC level and the purity of the crop. A federal or state inspector finding a THC level the is too high could hit a panic button for the whole supply line.

General provides the processing and marketing of the oil for the producer, in return for a percentage of the income from the distillate. General also retains the ‚Äúwaste‚ÄĚ or the stalks, stems and large leaves. Miles says General is in the process of finding a market for those. Typically stalks are used for products like pressed board, paper and textiles.

When up and running full steam, processing 10,000 pounds of hemp a day, the plant will employ about 30 people. Some of the jobs, like distillation technician, require special education. The equipment manufacturer helps Miles with the training process. A 10,000-pound processing day will yield about 1,000 pounds of CBD.

‚ÄúWhen we get everything running the way we want it, a typical year will see us bringing in the raw products in the fall and early winter, drying it, storing it, and then finishing it during the coldest winter months,‚ÄĚ Miles explains.

From here to there

What happens to the CBD product once General finishes it?

‚ÄúA small part of it goes into our product line, Only Pure,‚ÄĚ says Miles. ‚ÄúThe rest we sell to labs and producers of cosmetics and foods that use CBD.‚ÄĚ

General has a four-person sales staff that works at selling the oils. Considering the supply and demand being upside down at this point, it is not a hard job yet. With the youth of the industry and the number of uncertainties still invested in it, there is no commodities futures market. Everything that gets produced is almost immediately taken by the thousands of manufacturers using it. Further, there is no history on which to build future models.

Miles, who calls himself the plant manager, says that being on the cutting edge of a new industry is exciting, but it is fraught with danger.

‚ÄúNot everyone is going to win, a lot of the people who planted this year, may not be back next year,‚ÄĚ he says. ‚ÄúThere are a lot of growers who have planted their land under investment contracts where they were paid to plant. If the yields don‚Äôt come as investors have been told, the grower has some troubles.‚ÄĚ

A tour of the areas where hemp is planted will quickly back up Miles‚Äô comment. Some plantings appear to be not nearly as healthy as others.

‚ÄúI am in this game to win,‚ÄĚ Miles says. ‚ÄúI get here at five in the morning and I go home at five in the evening. I enjoy what I am doing. I try to avoid mistakes, but at this stage it is impossible. So I learn and I make adjustments and keep going.‚ÄĚ

« What‚Äôs next for rheumatoid arthritis and cannabis? – The GrowthOp Casper jumps on the CBD bandwagon with sleep gummies – Retail Dive »