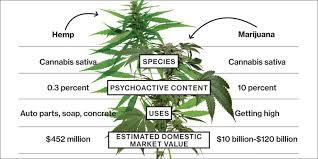 The new Virginia law, legalizing industrial hemp could bring dramatic change to the stateâ€™s landscape. Once a staple crop in colonial Virginia, it was later banned and labeled a dangerous drug. ButÂ  even though itâ€™s now OK to grow it here, there are still plenty of challenges and legal roadblocks ahead because of its controversial cousin, the marijuana plant.

For the last two years, the only people who could grow hemp in Virginia were part of four university research projects in the state.Â  But now, anyone who wants to farm it here can to register to be part of a new research project by the Virginia Department of Agriculture and Consumer Services. Â

â€śYou need to have registration in order to be in possession of hemp because ultimately weâ€™re talking about a cannabis plant,â€ť says Erin Williams, who administers VDACSâ€™s new industrial hemp research project. â€śHemp is cannabis that has no greater than point three percent THC and is grown by somebody who is allowed to grow it in Virginia.â€ť

Williams says her agency has the authority for random testing for tetra-hydro-cannabinol â€“ the psychoactive component in cannabis.

As every gardener knows, plants sometimes have a will of their own

â€śThere are a number of unknowns,â€ť says Virginia Tech environmental science professor John Fike, who leads one of Virginiaâ€™s university-based hemp research programs. He says at first it was a nightmare just ordering seeds from faraway places with no supply chain and little infrastructure. But his team managed to get several crops going, mostly strains for grain, or fiber. One project focused on hemp flowers, used to make CBD oil, which is considered medicinal, but non-psychoactive.Â Â

But itâ€™s not always so cut and dried in the plant world. â€ś Letâ€™s say I had a plant that was (contains) 16% CBD. Thatâ€™s a respectable number and it might be point-seven THC,” Fike says. “But by law Iâ€™d have to throw away the one thatâ€™s over ( Virginiaâ€™s legal limit.)”

If that brings to mind a picture of G-men emptying out bottles of booze during prohibition, itâ€™s because of the fearsome reputation of the hemp family and the aura of reefer madness.

â€śWeâ€™re going to have to fight these misconceptions,â€ť says Jason Amatucci, the Founder and Executive Director of the Virginia IndustrialÂ Hemp Coalition.

Amatucci says neighboring states have gotten a jump on Virginia and are already bringing in tens of millions of dollars annually from hemp. He says it can become a billion-dollar industry but, itâ€™s going to take a lot of work to get it going. Â

â€śThis is not something that youâ€™re going to just jump into and think that youâ€™re going to make a lot of money right away.Â  Thatâ€™s just not the case. Weâ€™ve got to build our market here.Â  Thatâ€™s why itâ€™s very important for our government to put wind in our sails, such as they have done in Kentucky and thatâ€™s why 16-million dollars went to farmers there and even more is going to go next year.â€ť

While CBD oil from hemp plants is, of course, not illegal in Virginia, THC from marijuana plants still is.Â  A bill, co-sponsored by Virginia U.S. Senator Tim Kaine would leave the decision about legalization of pot up to each state.