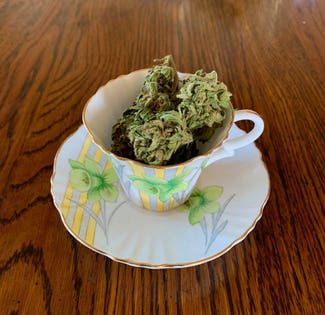 The quest for a good nightâ€™s sleep is one of the main factors motivating older adults to try a cannabis product. Insomnia, along with pain and anxiety, is one of the triumvirate of conditions that adults over 55 most commonly cite as the reason they use marijuana.

Of the many possible forms of ingestion, drinking a cup of cannabis tea before bedtime can be an attractive nightcap option. In our post-Farm Bill world, a plethora of hemp-derived CBD teas are now available in stores and on line. But for those who are not THC-phobic and open to experiencing the full spectrum of what the cannabis plant can offer, there are a number of cannabis tea options to consider.

In adult-use cannabis-legal states, sleep-promoting cannabis teas can readily be found on dispensary shelves. Out of Colorado, Stillwaterâ€™s Mellow Mint Tea combines organic peppermint tea with 10 mg CBD and .5 mg THC in a recyclable tea stick, promising that you will â€śsleep like the dead, (in a good way).â€ť

Kikoko, a California-based producer of organic, cannabis-infused herbal teas, offers â€śTranquili-tea,â€ť an aromatic mixture of organic peppermint, chamomile and other herbs along with 5 mg of CBN and 3 mg of THC in each precious mesh sachet.

As someone whose greatest fantasy (well, at least one of them) is an uninterrupted eight hours of sleep, I had high hopes for Tranquili-tea. Following the package instructions, I steeped the bag for two minutes to drink before bedtime. The label on the can invites you to â€śSeize the ZZZZs,â€ť and promises that the product will help you wind down and go deep, without feeling groggy in the morning.

The tea was delicious, and I ended up refilling my cup to get all the flavor from the teabag before heading off to bed with a pleasant buzz. But when I checked the clock at 4 AM, the drawback of drinking two cups of tea before bedtime was obvious. Still, my Kikoko tea session was a pleasant and relaxing pre-sleep ritual.

At around $9 for a single teabag ($6 if you buy a tin of 10), Â however, these boutique cannabis sleep aids may not be a sustainable solution for the average older adult, who faces sleepless nights as far as the red eye can see.

Having regularly prepared infusions from herbs I picked from my garden, I wondered if simply steeping cannabis leaves could produce a sleep-enhancing drink. If yes, just growing your own cannabis plant, or having access to cannabis leaf, could be a more economical way to go.

I asked Mitcho Thompson, a Sebastopol, California-based herbalist and owner of Phytomagic, a manufacturer of cannacentric herbal tinctures, salves and concentrates, if cannabis could indeed be consumed as an herbal tea, and if so, what is the best way to use it for a sleep-promoting effect.

According to Thompson, cannabis tea is one of the most popular forms of consumption in herbal medicine in cultures around the world. And it is relatively simple to prepare. He recommends putting about a teaspoon of â€śshakeâ€ť â€“ or loose leaves – into a tea-ball, then steeping it in a cup of freshly boiled water for several minutes. Â Spearmint can be added to create your own sleepy-time mix, or even just dunk the cannabis alongside an herbal teabag.

Thompson suggests trying an Indica strain, which tends to be more relaxing. But because there are so many variables involved when consuming cannabis â€“ from the type of plant to the wide range of ways that different individuals respond to it, he strongly recommends experimenting with very small amounts and gradually increasing the quantity until the desired effect is reached.

There is one major caveat, Thompson explains. For the cannabinoids in the tea to be absorbed into your system, an oil-based ingredient must be added to the mix. Thatâ€™s why in Nepal yak butter is added to tea, and in Jamaica, coconut fat. If you donâ€™t have either on hand, cream or milk will do the trick.

Because hot water does not produce enough heat to activate the psychoactive effects of THC, the tea will probably not get you high. But the other cannabinoids present in the plant should exert their relaxing, anti-inflammatory and analgesic effects. So, according to Thompson, it may even provide pain relief as well.

Warren Bobrow, the grand master of cannabis-infused beverages, has his own approach to brewing a bed-time elixir. His soporific of preference is a cup of Serendipiteaâ€™s zzz Egyptian chamomile and European lavender tea, topped off with a dollop of cannabis-infused ghee that he makes using his new, deluxe Levo herbal infuser. The high-end version, at $350, includes a decarboxylating function which activates the full effects of the cannabinoids in the plant.

Having a source of cannabis oil in your own home opens an entire range of DIY cannabis culinary and therapy options. And if this system can actually deliver a good nightâ€™s sleep, then it might be a very sound long-term investment.