[Stay on top of transportation news: Get TTNews in your inbox.]

ARLINGTON, Va. ‚ÄĒ The Federal Motor Carrier Safety Administration‚Äôs update to its Medical Examiners Handbook is a step closer to completion. The handbook serves as a guideline for physicians who use it to assess truck driver health.

FMCSA‚Äôs Medical Review Board spent two days reviewing a rewrite of the agency‚Äôs handbook that is ultimately aimed at keeping unhealthy commercial motor vehicle drivers off the road and ensuring that drivers who mind their health remain behind the wheel.

The rewrite offers the agency‚Äôs suggested ‚Äúbest medical practices‚ÄĚ for the more than 50,000 certified medical examiners who evaluate such complex medical conditions as diabetes, sleep apnea and cardiovascular disease.

It also offers the examiners, who give truck drivers physical exams at least once every two years, information on regulatory requirements for such problems as high blood pressure, inadequate vision and poor hearing, as well as when to disqualify a driver or limit the length of a driver‚Äôs medical certification period. 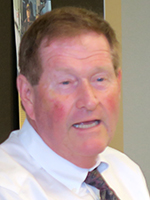 ‚ÄúWe started working on the handbook last year and we got bogged down very quickly because we didn‚Äôt think we could make changes to it,‚ÄĚ Brian Morris, a Boston occupational medical doctor who serves on the medical board, told Transport Topics. ‚ÄúChanges would require publishing in the Federal Register and getting opinions on it. So if we wanted to make any major changes it would become a very complicated process.‚ÄĚ

Since then, the agency assigned its recently named chief medical officer, Joseph Sentef, to trim the previous handbook and update changes or improvements in diagnosing driver medical health. Sentef cut the length of the revised draft handbook from 260 pages to less than 80 pages.

Now, the recommendations of the medical review board will be sent back to FMCSA to produce a final draft version of the handbook and then gain final approval by the board in a subsequent meeting.

During its two-day review the board tweaked (and left unchanged) a number of medical best practices, including: