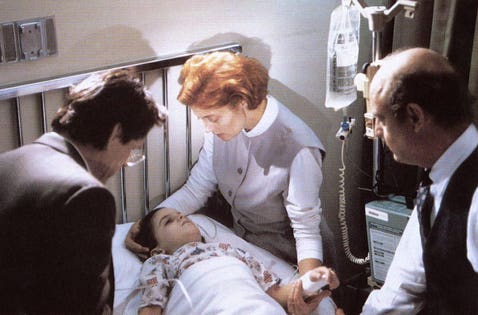 Unsatisfied with traditional medicine, this scientist developed a cannabidiol oil to remedy the brain seizures of her child.

In the 1992 critically-acclaimed movie Lorenzoâ€™s Oil, Augusto and his wife Michaela set out on a mission to find a treatment to save their child after doctors prove incapable of treating their son’s rare disease.

This modern tale of inventionÂ is a similar one about a young boy named Macario, suffering from seemingly untreatable conditions. In todayâ€™s evolved culture, however, the oil is from cannabis.

It wasnâ€™t expected to be this way. Macario’s birth was a smooth one, his tests were clear, and he was discharged early from the hospital. â€śThey said he looked fine and everything was fine,â€ť his mother Dr. Annabelle Manalo told me. After just a few hours at home for the first time, Macario was seizing, twitching, and foaming at the mouth.

Manalo and her husband returned Macario to the hospital where he remained for weeks. Some days, news from hospital staff appeared encouraging, other days disheartening. â€śEvery morning we would wake up, and wait for the neurology team to circle back around,â€ť Manalo said.

The boy who inspired @MasayaCBD medical #marijuana oil. The most powerful #cannabis #CBD oil on the market. https://t.co/9jSpgrLtZ7#wellness #alternativemedicine pic.twitter.com/OwbNxc2kQs

Manalo, a scientist with a Vanderbilt University Ph.D. in cell and developmental biology, refused to remain idle when traditional medicine failed her son. She took matters into her own hands and began researching cannabis. â€śI bought everything on the market as far as cannabidiol and tested it on myself first,â€ť Manalo told me.

Cannabidiol, or CBD, is one of the two most prevalent chemical compounds in the cannabis plant and has been proven effective in treating myriad health conditions. Unlike the more famous molecule, tetrahydrocannabinol (THC), CBD is completely non-psychoactive.

â€śDifferent cannabinoids can have a wide range of different effects throughout the body by binding to the bodyâ€™s various receptors. Based on thousands of recent scientific studies, there is reason to believe it may have a number of very positive therapeutic effects, from reduced pain and inflammation to the treatment of seizures and other neurological disorders,â€ť said Rory Millikin, co-founder and president of cannabisMD.com, a media company focused on providing information on CBD and medical marijuana.

â€śIn many ways, we are just emerging from the dark ages here,â€ť said Josh Crossney, president & founder of JCanna and CSC Events, who heads the Cannabis Science Conference. A major obstacle for scientific advancement, he points out, has been overcoming decades of blocked access, misinformation, and stigma. â€śCannabis has many potential therapeutic benefits, but in order to fully recognize these benefits, we must move beyond anecdotal evidence to full clinical trials,â€ť Crossney continued. â€śResearchers in the U.S. are now moving these trials forward, as well as collaborating with international experts.â€ť

Only the pioneering curious and dedicated can make a difference. Manalo thoroughly researched cannabis-based treatments but wasnâ€™t satisfied with what the market had to offer. â€śThere isn’t enough transparency about what’s in these bottles,â€ť she explained. â€śThere are a lot of unknowns when it comes to individual cannabinoids and there’s a great deal of variability from bottle to bottle.â€ť

â€śI’m a scientist, so I wanted to understand all talk of the synergistic effects everybody was saying that CBD extracts had, how they differ, and what exactly I was giving my son,â€ť Manalo acknowledged. â€śI didnâ€™t necessarily want to make a CBD oil but I was convinced that it could help my boy.â€ť

The birth of Masaya

Doggedly determined, Manalo embarked on a mission to develop her own compound. â€śThat’s how I kind of roll,â€ť she confessed. â€śGod gave me this scientific mind, so I might as well use it.â€ť She rented a lab, set up her own apparatus, and formulated a pure, high dosage CBD oil with a medium that allows the supplement to pass the blood-brain barrier.

Dr. Manalo worked to ensure the right ingredients and testing were used and focused on the chemical potencies required to help her child. After two months, sheâ€™d formulated a solution three times more potent than the strongest CBD and purest CBD isolate on the market. Manalo had her oil tested locally in Nashville before her final certification from a third-party lab.

Manalo and her family named the proprietary formulaÂ Masaya (Filipino for â€śhappinessâ€ť). She introduced Masaya to Macario and saw dramatic improvement within a week. Macarioâ€™s right eyeâ€”barely in view due to his missing occipital lobeâ€”began rolling back into place.

Macario began using his right hand, moving, crawling, and by 14 months was finally walking. Heâ€™d exceeded the expectations of both doctors and therapists experienced in similar conditions. “He was functioning like a normal boy…like nothing had happened,” Manalo revealed. “If you saw him now you’d have no idea he has any sort of condition. It was amazing.”

Today, Manalo has filed a patent for her formula and Masayaâ€™s product testimonials have been glowing.

One thirty-four-year-old patient related sheâ€™d had epilepsy since the 5th grade and found herself living in â€śsort of a fog.â€ť â€śMy meds controlled my seizures for the most part, but Iâ€™d still have issues with my vision and occasionally no vision in my right eye,â€ť she reflected. Her fog lifted and vision became clear the first time she remedied her eyes with Masaya oil. â€śI’ve never seen like this before!â€ť, she wrote the Masaya team. â€śI actually asked my husband if this is the way people really live.â€ť

â€śMasaya oil has changed my life!,â€ť shared a Masaya patient with multiple sclerosis. The pain is manageable and overall I can function throughout the day.â€ť And there are countless more attestations from patients using Masaya to treat conditions like amyotrophic lateral sclerosis (ALS), fibromyalgia, Crohn’s disease, cancer, Alzheimerâ€™s, post-surgery recovery, anxiety, and others.

Since launching in July 2017, the demand for Masaya has grown from exclusively direct and internet distribution to plans for expansion worldwide. The brandâ€™s goal has been to remain under the radar, and Manalo has ensured not mix and match it with other products.

Along with demand comes education. When folks in the familyâ€™s hometown of Nashville, Tennessee sought to learn more about Masaya, Manolo and her husband began hosting CBD education events to reach them. There’s lots of confusion and uncertainty surrounding cannabidiol, andÂ solutions aren’t totally devoid of side effects.Â Â “Synergy can be great but when we donâ€™t know the role of certain components, side effects are a risk as well as psychoactivity,”Â Manalo revealed. “So it’s important to share knowledge about this powerful plant with the people who are going to use it.”

An early, frequently-cited study reported CBD taken in high doses may worsen tremor and muscle movement in Parkinsonâ€™s disease sufferers. It should be noted that this study was limited to merely five patients.

More recent and extensive research has shown that cannabis could be beneficial in reducing inflammation and mitigating symptoms of Parkinsonâ€™s. CBDâ€™s most frequently reported side effects are tiredness, diarrhea, and changes of appetite/weight. It is universally agreed that much more clinical research is warranted on CBD action on hepatic enzymes, drug transporters, effects on hormones, and interactions with other drugs to examine positive or negative effects.

It turns out, education works. â€śThere I am educating people on the power of CBD, and talking to people about what I created,â€ť Manalo revealed. â€śThe next thing you know we’ve got people lined up outside the door waiting to buy our products.â€ť

Manalo will be collaborating with leaders in international research initializing clinical trials by the end of June 2018. With these partnerships, she looks to formulate other specific cannabis-derived pharmaceutical grade products. Her goal is to establish an educational platform tied to products that can be trusted – worldwide.

The brandâ€™s biggest challenge now is scaling with an emphasis on ushering the patient experience with understanding and guidance. â€śI didn’t want Masaya to sit on a shelf to be compared to anything else,â€ť Manalo declared. â€śI want people to speak it. I really think of it as a true medicine.â€ť

« Can CBD Really Make Everything in Your Life Better? High blood pressure – how much CBD oil will lower hypertension risk? »