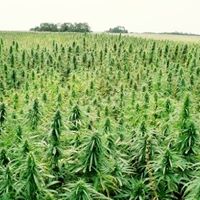 A field of hemp plants

A pair of bills allowing commercial hemp farming in Connecticut have cleared their first hurdle, winning unanimous approval from the legislatureâ€™s environment committee.

Advocates were emboldened by the move, but acknowledged the measures still have a long way to go.

â€śDefinitely, we feel encouraged,â€ť said Jeff Wentzel, head of the Connecticut Hemp Industry Association, an advocacy group. â€śThis has a good shot, but thereâ€™s still going to be some heavy lifting.â€ť

The legislation, which made it out of committee on Friday, would authorize a pilot program for the production and sale of hemp. It also calls for the stateâ€™s agriculture department to submit regulations to the federal government for licensing, growing and processing industrial hemp. The agriculture department would be required to come up with regulations for tracking and inspecting farm land.

Hemp is considered a booming industry because the plant, a type of cannabis, produces a non-intoxicating substance known as CBD oil, which is used to treat inflammation, pain and anxiety. Entrepreneurs have incorporated it into lotions, pills, tinctures and candies.

â€śIâ€™m very optimistic,â€ť he said. â€śIf weâ€™re looking for ways to stabilize and expand opportunities for Connecticut farmers and for the next generation to be interested in agriculture, we need to have products and crops people are interested in growing and that can be sold.â€ť

Revenue projections tied to hemp have made the plant â€śa game changer,â€ť he said.

In Connecticut, about 200 of the stateâ€™s more than 6,000 farmers have expressed an interest in growing hemp, Hurlburt said.

â€śWe want to make sure that we get access to this opportunity just like the other states,â€ť he said. â€śSupply is outweighed by demand, so there is still room in the marketplace for more hemp to be grown and processed.â€ť

Lawmakers urged swift movement on the bills so state farmers could take advantage of the upcoming growing season, which begins in June.

â€śHere we have a chance to create an entire industry, but thus far weâ€™ve been falling behind,â€ť said Sen. Christine Cohen, D-Guilford, a co-chair of the environment committee. â€śWe will create opportunities for our struggling dairy farmers to utilize their land and save their farms while also enticing budding farmers to join a flourishing market.â€ť

The bill will head to the Senate for a vote.

« After Developing A Revolutionary New Nanoemulsion Technology For CBD Oil, Pressure Biosciences Is Worth Watching – Seeking Alpha Weed Ed | What you need to know about cannabis and your pets – Jamaica Gleaner »