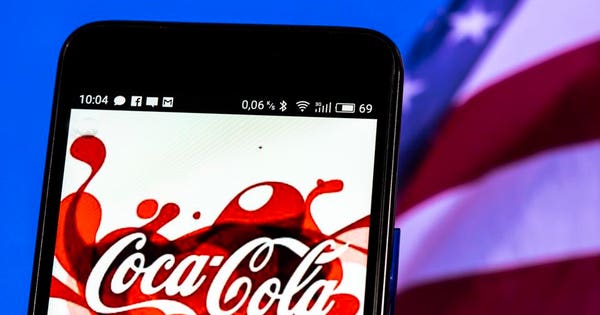 The Coca-Cola logo is seen displayed on a smartphone in Kiev, Ukraine on September 13, 2018. (Credit: Igor Golovniov/SOPA Images/LightRocket via Getty Images)

The Atlanta-based world leader in beverage sales could soon add cannabis to its list of ingredients for certain products.

BNN BloombergÂ reported this week that Coca-Cola Co. says it is keeping an eye on the legal cannabis industry and is considering its options for producing drinks infused with cannabidiol, or CBD, a non-intoxicating chemical found in cannabis and hempÂ that is believed to have numerous health and therapeutic properties.

According to BNN, the world’s largest soft drink company is in talks with Canadian cannabis producer Aurora Cannabis to develop the products, which could add to Coca-Cola’s growing list of alternatives to its sugaryÂ namesake beverage.

See also:Â Canadian Military Green-Lights Cannabis Use For Most Personnel

Coca-Cola spokesman Kent LandersÂ told Bloomberg News in a statement, â€śWe are closely watching the growth of non-psychoactive CBD as an ingredient in functional wellness beverages around the world…The space is evolving quickly. No decisions have been made at this time.â€ť

Cannabis experts have pointed out that CBD is not, in fact, a non-psychoactive cannabinoid chemical, given its ability to help many users find relief from anxiety or depression (or otherwise to relax), and is best described as “non-intoxicating.”

See also:Â Cannabis Is Creating A Boom For Biological Pesticides

Coca-Cola is only one of many beverage-makers to explore entering the cannabis space in recent months.

No deals between Coca-Cola and Aurora have beenÂ announced at this time. At present, the potential implications of the U.S.’s recent threats toward Canadian cannabis investors and producers are also unknown.

In any case, the potential addition of CBD to Coke products seems like a classy step up, ingredient-wise, from both sugar and cocaine.

« CBD Infused Coca Cola Drinks Might Be A Thing Soon, But There’s A Catch Feds approve importation of pot drug for tremor study »