Juul dominated the e-cigarette industry, prompting the FDA to call teen vaping an ‚Äúepidemic.‚ÄĚ What does vaping do to your body? We explain. Just the FAQs, USA TODAY

California health officials and cannabis industry advocates are warning consumers to stay away from illicit¬†cannabis vape products in the face of a nationwide outbreak of lung illnesses and several deaths.

‚ÄúMost patients recently vaped cannabis products, some of whom stated that the vaping products were sold by unlicensed, unregulated entities such as street vendors or pop-up shops,‚ÄĚ department officials told The Desert Sun in an email.

Friday afternoon, the Los Angeles County Department of Public Health tweeted that officials are investigating the first known death in the county of an individual connected to vaping.

Nationwide, three other deaths and 450 possible cases of lung illnesses have been linked to vaping, the federal Centers for Disease Control and Prevention said Friday. Dr. Ileana Arias, the acting deputy director for noninfectious diseases, said officials are investigating one other possible death while working around the clock to determine what may be causing the illnesses. 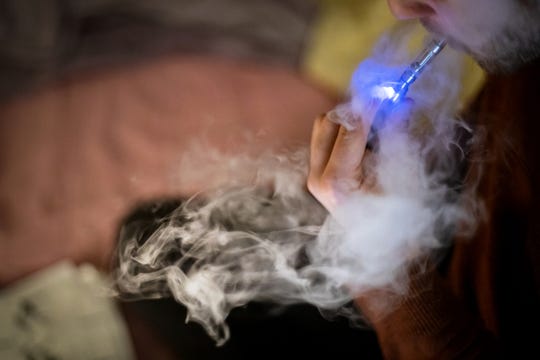 A 24-year-old Madison resident takes a drag from a cannabis vape cartridge. In September 2019, state health departments and federal officials were investigating lung illnesses in people who had recently vaped cannabis.

‚ÄúThe focus of our investigation is narrowing, and that‚Äôs great news, but we‚Äôre still faced with complex questions in this outbreak that will take time to answer,‚ÄĚ she said.

People coming down with a lung illness may feel like they can‚Äôt get enough air into their lungs, experience chest pains, or start breathing rapidly. Other early symptoms include a low blood oxygen level and low blood pressure. Some patients experience gastrointestinal symptoms or feel tired and develop¬†a fever.

In Riverside County, health department officials said Friday there are five¬†cases that fit the criteria for the lung illnesses, and one case that‚Äôs still being investigating.

In Kings County¬†near Fresno and Visalia, seven cases of acute respiratory distress syndrome were linked to vapes from unlicensed pop-up shops, according to an Aug.¬†12 news release. Since then, there‚Äôs been two more cases, Nancy Gerking, assistant director of public health, said Thursday.

The illnesses underscore why consumers should purchase products from licensed retailers, as those have undergone testing, said Dale Gieringer, the director of California NORML,¬†a group that backs the legalization of cannabis.

‚ÄúOur advice has been for people to stay away from the underground cannabis oils,‚ÄĚ he said.

While consumers who want to buy cannabis vapes could search state databases to find if their retailer or brand of choice is regulated, a proposed tweak to existing cannabis regulations could make it even easier.

Lawmakers in Sacramento are considering a proposal that would require a small universal symbol on cannabis vape products ‚ÄĒ either a sticker, printed or engraved ‚ÄĒ so consumers know the product is regulated.

The California Cannabis Industry Association came out in support of the bill earlier this year. It¬†said existing labeling requirements are too big to put on cylindrical vape cartridges. 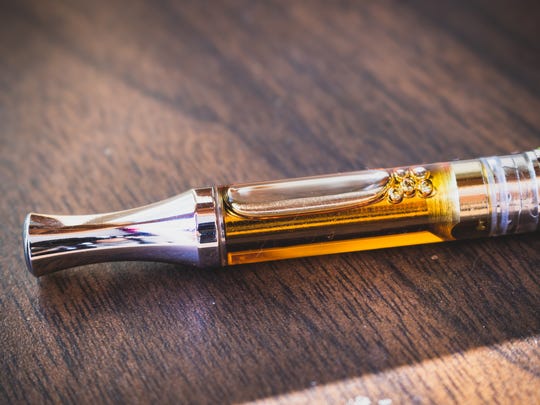 CCIA communications and outreach director Josh Drayton said the new label size means consumers would know from the get-go that their products have been tested for pesticides, toxins or residual solvents.

‚ÄúThe products that you find in the illicit market have been tested for nothing,‚ÄĚ he said. ‚ÄúWe want to make sure we‚Äôre identifying any sort of product that could be causing harms to public safety and public health.‚ÄĚ

The bill could pass before the end of the state legislative session on Sept. 13.

As the number of cases climbs, federal officials are working with affected state health departments to determine the cause and create a definition for the outbreak.

So far, they‚Äôre finding ‚Äúclinical similarities‚ÄĚ among patients. And the CDC says a¬†lack of evidence of infectious disease in the patients indicates that the illnesses are likely the result of a chemical exposure. But they‚Äôve yet to link the illnesses to one particular product or chemical.

In New York, the health department documented 34 reports of severe pulmonary illness from patients who had used a cannabis-containing vape as of Sept. 5. Testing of patient samples led them to a product containing vitamin E acetate, which is not an approved additive in vape products.

But CDC officials said Friday that no one device, product or substance has been linked to all cases. Right now, federal officials are testing more than 120 samples.

‚ÄúContinued investigation is needed to better understand if a true relationship exists between any specific product or substance and the illnesses we are observing in patients,‚ÄĚ Dr. Dana Meaney-Delman, the incident manager for the CDC, said on a conference call with reporters.

Melissa Daniels covers business and real estate in the Coachella Valley. She can be reached at (760)-567-8458 or melissa.daniels@desertsun.com. Follow Melissa on Twitter @melissamdaniels

« 5 Reasons For You To Use CBD Oils – Weed News Dr. Sanjay Gupta: Researchers Are Focused On Treating Autism With Marijuana – The Fresh Toast »