An Indiana woman and about five dozen other chronic pain patients stood in front of the Centers for Disease Control Headquarters on Friday to protest the CDC Guideline on Opioid Prescribing. 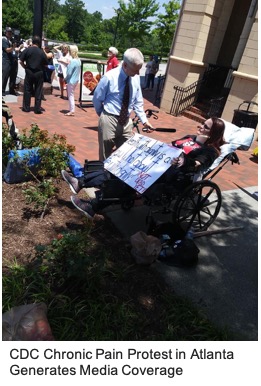 The protest‚Äîofficially called an assembly because the organizers secured an Assembly Permit‚Äîwas mostly symbolic and drew some Atlanta media plus many more people who followed and promoted n social media.

Johnna Magers of Indiana conceived the idea. As a chronic pain patient for nearly two decades she knows well the impact the CDC Guideline and DEA pressure has meant to prescribing doctors and their patients.

‚ÄúThe energy was amazing,‚Äù she told us over the weekend. ‚ÄúThis is just a start; we need a lot more people to show up in the future and make our point.‚Äù

When asked if anyone from the CDC came down from the office to talk with them, she said, ‚Äúof course, not.‚Äù

She is already talking about making a trip to Washington D.C. and make the case to both elected officials and the Drug Enforcement Administration that pain patients are being hurt by the so-called ‚Äúcrackdown on opioids‚Äù.

‚ÄúWe need that CDC Guideline rescinded and for the DEA to stop terrorizing our doctors,‚Äù she said.

She also pointed out that pain patients need to literally get up out of their seats and start making more noise.

‚ÄúWe can‚Äôt make excuses,‚Äù she said. ‚ÄúUntil we have the numbers of people who are talking about the issues, having conversations with elected officials and getting more attention from the mainstream media, we can‚Äôt expect any change to occur.‚Äù

She was effusive in her praise of the folks who traveled from across the country to participate in Friday‚Äôs event.

The time has come, she said, for our government to understand they are punishing people in pain.

The ‚Äúassembly‚Äù (aka protest) drew praise from many pain patients who read the National Pain Report but couldn‚Äôt attend. Here‚Äôs what Fila Paragas told us:

‚ÄúI am with you all in thoughts and prayers for your great efforts despite tremendous difficulties with all your conditions. Pain patients are suffering in US and elsewhere. Some are no longer around to lend their voices. Chronic Pain patients and their lives do matter! You deserve better‚Ä¶to be treated with dignity and respect! And more! Let your voices be heard. Thank you very much.‚Äù