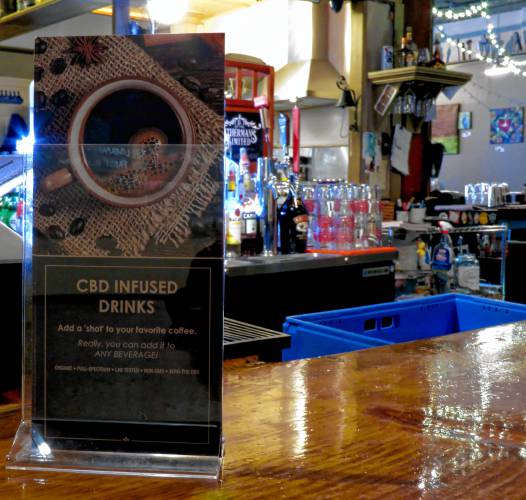 The national trend of CBD-created products has made its way to the Capital City.

By now, you might have seen the cannabis derivative in a few places, including Granite State Natural Foods and the Concord Food Co-op. CBD is a chemical component of the cannabis sativa plant, more commonly known as marijuana, but it does not cause intoxication that comes from tetrahydrocannabinol (THC).

And at True Brew Barista, customers over 18 are able to buy a shot of a CBD infusion made specifically for beverages.

The supplement is so pervasive, you can even find it in some gas stations. And when the U.S. Food and Drug Administration last year approved the first drug comprised of an active ingredient derived from marijuana to treat rare, severe forms of epilepsy, it seemed CBD was¬†on its way to becoming mainstream.

Even so, local retailers still find themselves doing a lot of education on the product.

‚ÄúPeople are really receptive, but some are still a little concerned about the perceived negative aspect,‚ÄĚ Stephanie Zinser, owner of True Brew, said in a recent interview. ‚ÄúSome people still associate it with marijuana.‚ÄĚ

‚ÄúThere‚Äôs a lot of lousy CBD on the market,‚ÄĚ he said, adding that the supplement industry is notoriously difficult to regulate.

Wendy E.N. Thomas, a patient liaison at the medical cannabis dispensary Prime ATC in Merrimack and a state rep, tackled this subject in a September op-ed for Manchester Ink.

‚ÄúWhile there are reliable and trustworthy sellers of CBD products, there are also people out there who want to make a quick buck.‚ÄĚ

Tina White and Carrie James of Clearly Better Days, whose CBD¬†is used in True Brew‚Äôs coffee,¬†say the product¬†they sell is derived from industrial hemp grown in compliance with¬†section 7607 of the 2014 Federal Farm Bill, meaning the hemp has naturally less than 0.3 percent of THC on a dry-weight basis.

The CBD used in their products comes from a Colorado manufacturer with a pilot hemp program, and each batch comes with a certificate that states it was grown with no heavy metals or pesticides.

Jeanotte said the products he sells are all derived from hemp grown in Europe.

Zinser and Jeannotte said they had big staff meetings prior to introducing the products and did extensive research. For comfort reasons, neither retailer sells to people under 18.

Both say their products have been well-received by the public. Zinser said True Brew sells about 40 shots a week at $5 a pop.

Jeannotte said CBD‚Äôs anecdotal benefits, which have been said to help everything from pain to anxiety, proves to be a big draw for the product.

‚ÄúI would say people should go to a store that you would trust to buy any other supplement from,‚ÄĚ he said. ‚ÄúIf you want to learn about (CBD), go there to get a higher level of education, because the conversation around it can be so confusing.‚ÄĚ