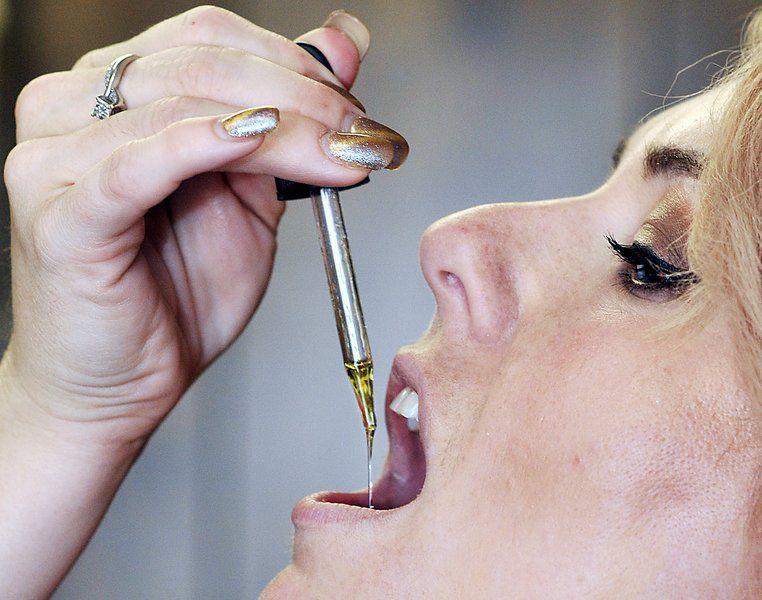 ELWOOD ‚ÄĒ Sitting inside the cool lobby of Rebellious Makeup By Morgan, owner Morgan Johns talked about why she uses canabidiol (CBD) oil as a natural pain solution for her osteoarthritis and hip issues.

She said her doctors offered her pain relievers and muscle spasm medication to relieve her pain, but she was not interested in a fistful of prescriptions.

‚ÄúI did not want to go down that path with the opioid crisis as crazy as it is right now,‚ÄĚ Johns said. ‚ÄúAnyone can get addicted to anything if given enough or they become dependent on it.‚ÄĚ

A friend encouraged Johns to try the CBD oil, and while she was skeptical, Johns said she agreed. A two-fluid-ounce container cost her less than $50.

‚ÄúI knew an instant reaction within about 45 minutes of energy,‚ÄĚ Johns said. ‚ÄúI felt like I had a cup of coffee or a shot of espresso.‚ÄĚ

But she had no other side effects and the pain was still present.

‚ÄúThen I would say about a month and a half in, that was when I really started to notice I felt better,‚ÄĚ Johns said. ‚ÄúI‚Äôve read people call it a placebo effect, but even if it is, I have tried other things and this works. If it is a placebo, why wouldn‚Äôt I have a placebo effect with anything else?‚ÄĚ

Johns decided to sell the oil in her salon and went to city officials and the chief of police to talk about selling it in the community. Johns said she was not saying CBD oil was a cure-all; she just wanted to offer it as an option.

At first she could not keep up with the sales, and then signs started popping up around Elwood where others were selling CBD oil.

‚ÄúWhen the market flooded, I just started directing people to others selling this product,‚ÄĚ she said holding her bottle of oil.

Johns said people need to be careful what they buy because not all CBD oils are the same. She recommends looking for a full list of ingredients, asking to talk to other customers who use it, and researching the company that makes it.

CBD oil and your health

The Herald Bulletin reached out to doctors and nutritionists throughout Madison County to talk about the risks or benefits of CBD oil, but no one in the medical field responded to the request for information.

Medical advances with CBD products, however, are underway.

Earlier this week, the U.S. Food and Drug Administration approved a drug containing purified CBD, to be used to treat rare forms of childhood epilepsy.

The FDA states the approval for the drug is an important medical advancement, but the agency stresses this is not an approval of marijuana or all of its components.

‚ÄúThis is the approval of one specific CBD medication for a specific use,‚ÄĚ according a press release by the FDA. ‚ÄúIt‚Äôs being delivered to patients in a reliable dosage form and through a reproducible route of delivery to ensure that patients derive the anticipated benefits.

Contrary to popular belief, the FDA insists it has been supportive of the research of marijuana for medical uses.

The agency has an active program to assist drug developers who want to investigate marijuana or its components through properly controlled clinical trials, to demonstrate the potential for safe and effective uses.

Marijuana is classified as a Schedule I compound by the FDA with known risks so the treatment of medical disorders must be conducted under the same standard as other drug compounds, according to the agency.

The FDA notes that a growing interest in the development of therapies derived from marijuana and its components, such as CBD oil, has developed within the past decade.

Proponents of medical marijuana claim the plant is effective in treating a number of medical conditions, including cancer, multiple sclerosis, post-traumatic stress disorder and anxiety. But these claims do not sit well the FDA.

The agency said it is concerned by the ‚Äúproliferation and illegal marketing of unapproved CBD-containing products with unproven medical claims.‚ÄĚ

Actions have been taken by the FDA against companies distributing CBD oil drops, capsules, syrups, teas, topical lotions and creams that claim the products can be used to treat or cure serious diseases such as cancer with no scientific evidence to support such claims.

‚ÄúWe‚Äôll continue to take action when we see the illegal marketing of CBD-containing products with unproven medical claims,‚ÄĚ the FDA stated in a press release. ‚ÄúWe‚Äôre especially concerned when these products are marketed for serious or life threatening diseases, where the illegal promotion of an unproven compound could discourage a patient from seeking other therapies that have proven benefits.‚ÄĚ

The Low Cost Prescription pharmacy in Elwood has a sign on its building that says they sell ‚Äúhemp CBD oil.‚ÄĚ No one inside the pharmacy knew much about the product and they directed customers to a handwritten sign hanging next to the pharmacy window that says the oil is used to treat diabetes, anxiety, cancer and more than a dozen other ailments. A seven-day supply of the oil sells for $30, or a 28-day supply sells for $100.

‚ÄúWe don‚Äôt know anything about it,‚ÄĚ said a woman named Brittney behind the counter. ‚ÄúAll we have is a paper hanging over there about it. We just know what people tell us.‚ÄĚ

A new law that takes effect today will change the way CBD oil can be sold in Indiana.

As of today, all low-THC hemp extracts must be packaged with a scannable bar code or QR code linked to a document disclosing the manufacturer of the finished product, a certificate of analysis verifying the hemp extract is the product of a batch tested by an independent lab and contains no more than 0.3 percent THC, along with the results of the testing sample.

The scannable code must also provide a batch date, expiration date and ingredients.

Johns said the changes will help people make informed and safe decisions about the products they are consuming.

« Hemp vs. Cannabis: What‚Äôs a Better Basis for Cannabidiol Oil? Experts issue warning about claims that marijuana can cure cancer and other diseases »