Aurora Cannabis shares bounced back on Wednesday despite reporting fiscal third quarter results that missed analyst expectations. The Edmonton-based cannabis producer reported 20 per cent higher revenue and a 33 per cent lower net loss for the first three months of 2019 compared with the last quarter of 2018. Canadian consumer revenue rose 37 per cent to $29.6 million, exceeding medical revenue of $29.1 million, which was up 12 per cent. During a conference call with analysts, Aurora executives said the company is still tracking for a positive EBITDA in the current quarter, and it expects to harvest 25,000 kilograms of cannabis by the end of its fiscal Q4. While much of that will be set aside from processing, itâ€™s unlikely some of that will be earmarked for any beverage products. Auroraâ€™s CEO Terry Booth said Wednesday that there isnâ€™t much of a â€śproven marketâ€ť in the cannabis-beverage space and the companyâ€™s priorities are likely to be in the vape pen and edibles area.

Vancouver-based Invictus MD Strategies says it is withdrawing plans to list the companyâ€™s common shares on the Nasdaq exchange, it said in a release on Wednesday. As well, Invictus will not be moving forward with plans for the share consolidation that would have been required to meet Nasdaqâ€™s minimum share price listing threshold. Invictus CEO George Kveton said in a statement that the â€śintended timing of a Nasdaq uplist was premature and underway prior to my assumption of responsibilities.â€ť The company said it will revisit a Nasdaq listing in the future, but didnâ€™t disclose any specific timing.

It doesnâ€™t look like New Jersey will be legalizing cannabis this year. The stateâ€™s top lawmaker said Wednesday heâ€™s dropping efforts to have the state legislature pass a bill that would legalize marijuana in New Jersey, according to a report in NJ.com. However, there are plans for the stateâ€™s voters to take part in a referendum in November 2020 to decide whether to make weed legal there. As well, lawmakers will move forward with two bills that would expand the Garden Stateâ€™s medical marijuana program and expunge the records of residents with past convictions of possessing small amounts of pot, the news website said. Legalizing recreational marijuana was a top platform initiative of Governor Phil Murphyâ€™s 2017 campaign, which also received the backing from the stateâ€™s top Democratic lawmakers.

Canopy Rivers, the venture capital arm of Canopy Growth, is making another investment â€“ this time in the agriculture-tech space. The firm is investing US$1.5 million in a Series A financing round for BioLumic, a sustainable ultraviolet crop yield enhancement system. This marks Canopy Rivers’ first investment in agri-technologies, specifically focused on the promising fields of plant physiology and UV photobiology. The funds â€“ part of a total financing round of US$6.5 million â€“ will be used to expand BioLumicâ€™s light treatment initiatives, which includes applications in the medical cannabis market.

â€śWe’re actively pursuing opportunities in the U.S. but under the current regulations, which are very narrow at the moment, obviously CBD-focused.”Â
— Aurora Cannabis chairman Michael Singer on the companyâ€™s plans to enter the United States, the worldâ€™s biggest pot market 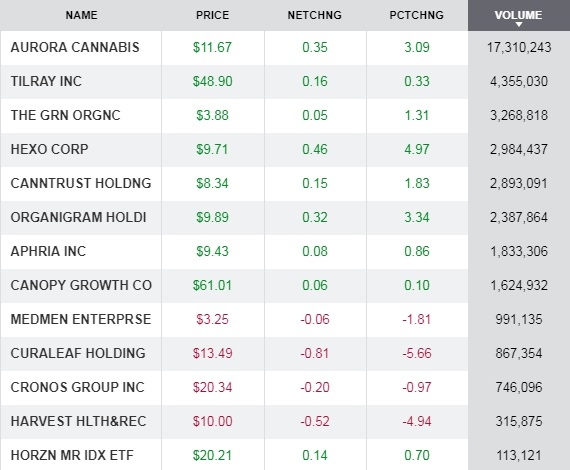