Cannabis And Its Effect On Lyme Disease 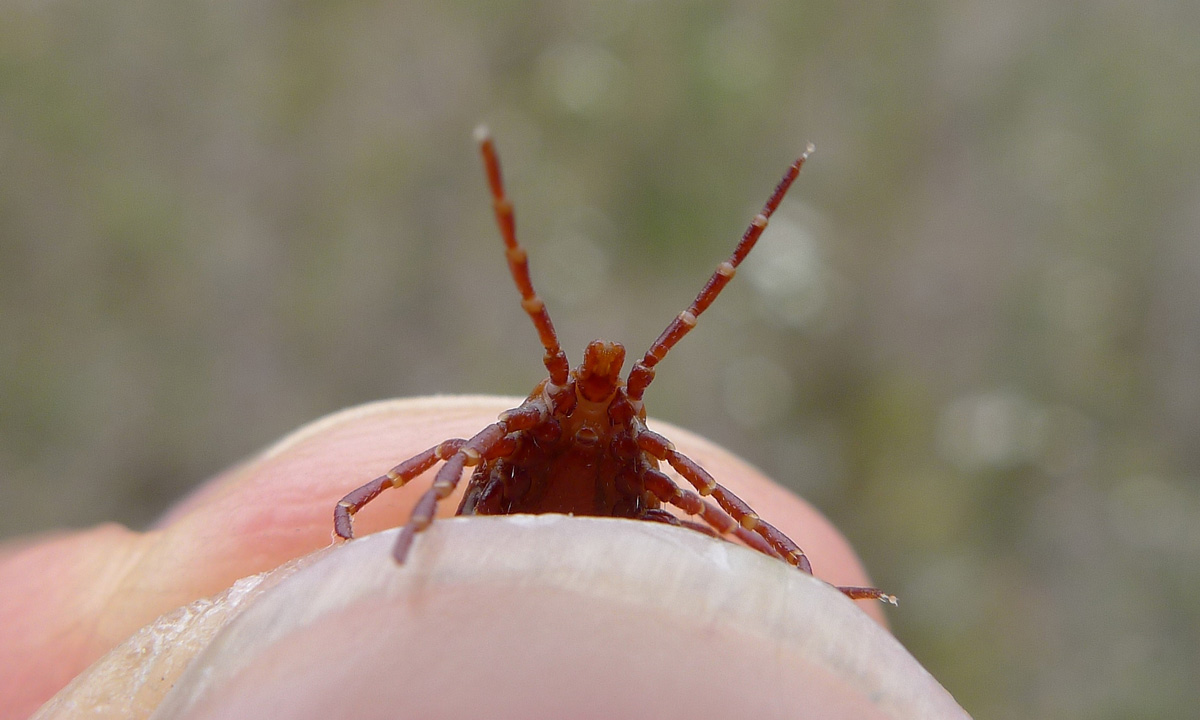 In America, more people are diagnosed with Lyme disease annually than HIV and breast cancer combined. Lyme disease transmitted by infected deer ticks can be an absolute, and often undetectable, nightmare. But new research is underwy on how cannabis can help alleviate the symptoms of Lyme disease.

The Infectious Disease Society of America acknowledges that Lyme disease is an epidemic, but that it is easily diagnosed and treated. The controversy is because the opposite is true in many cases. Early diagnosed cases may still require longer treatment, and a patient‚Äôs condition may be complicated by co-infections; i.e., other infections in addition to Lyme may be transmitted from the same tick attachment.

Ticks were a part of life growing up on Long Island. It was common practice among 1980s soccer moms; if a child came home with a tick on their head or leg, the little critter would get smothered with Vaseline and gently pulled out, making sure, of course, that the entire tick was expunged, body still intact. Helicopter moms might wrap the extracted tick up in something to show to a doctor later, just in case. The more salty, blue-collar moms would command their child to remain still, while they burned the tick with a lit cigarette (or match), wait for it to detach, throw it on the ground, and stomp on it. (This might be considered child abuse in modern times.) After being extracted in either manner, the ticks were promptly forgotten about, as the child ran back to the playground.

Nowadays, ticks are much more of a threat ‚ÄĒ specifically, the deer tick (aka black-legged tick). While not all deer ticks carry the Lyme bacteria, the bite of an infected one is dangerous. All of the old-school variations of tick extraction are ‚Äúa terrible idea,‚ÄĚ according to board-certified internist, Dr. Daniel A. Kinderlehrer, ‚ÄúIrritating a tick will increase the chances of transmitting infection.‚ÄĚ

Dr. Kinderlehrer, whose practice in Denver, Colorado, is dedicated to treating patients with Lyme and other tick-borne diseases, is writing a book called, ‚ÄúLyme Disease: It‚Äôs Complicated.‚ÄĚ He suggests using fine-pointed tweezers to grab the tick at the skin and applying gentle traction until the tick lets go.

The classic scenario is that recent onset, or acute Lyme disease, occurs about a week after a tick attaches to its host and is accompanied by a rash. Several days later, people will have flu-like symptoms: chills, body aches, fatigue and headaches, and subsequently they will develop arthritis, cardiac arrhythmias, nerve pain or meningitis. If untreated, the infection morphs into chronic Lyme. Typical symptoms of chronic Lyme are severe fatigue, sleep disorders, joint and muscle pains, cognitive dysfunction and mood disorders, particularly irritability (‚ÄúLyme rage‚ÄĚ), anxiety and depression. Other signs of the disease are pain in the soles of the feet and night sweats.

The Lyme symptoms of one woman from Milford, Connecticut (who wishes to remain anonymous) started with a rash, followed by flu-like symptoms, weakness, fatigue, and finally a severe headache and fever. She saw a doctor the next day. While undressing, her husband noticed a red ring under her arm, so she was quickly diagnosed.

If a patient is showing symptoms, many doctors might just ask them if they‚Äôve been in a ‚Äúwooded area‚ÄĚ recently. However, if a patient starts exhibiting symptoms months or years after the initial bite, recalling if he was recently wandering around in a wooded area is irrelevant. Only 15 percent of people ever see the tick attachments, less than 50 percent see a rash, and only half of the rashes are bulls-eyes. Patients often do not experience the symptoms of acute Lyme disease, but go on to develop chronic Lyme disease long after a tick bite they never saw.

‚ÄúBlood tests are not definitive, so doctors only treat you for it if you have symptoms. I had Lyme Disease of the central nervous system. Although it was severe, I was lucky to be treated right away.‚ÄĚ

The Lyme bacterium has creative ways to evade immune detection, making it difficult to diagnose, as well as difficult to eradicate. The most dangerous aspect of Lyme disease is that it can remain undetected and undiagnosed in patients for years, while patients‚Äô chronic complaints are misdiagnosed as Chronic Fatigue Syndrome, Fibromyalgia, anxiety, depression or an autoimmune illness.

Patients often go from doctor to doctor and never receive an appropriate diagnosis. According to Dr. Kinderlehrer, many people discover they might have chronic Lyme disease through friends, who point out their symptoms are similar to a relative that had it.

The most common screening test for Lyme Disease, the ELISA antibody test, has up to 60 percent false negative results, so it is advisable to get tested with the more sensitive Western blot test. However, this test may also have false negatives, and, according to Dr. Kinderlehrer, is prone to misinterpretation.

The key to treating Lyme disease is catching it as soon as possible because the longer it‚Äôs in the system, the more difficult it is to treat.

A recent article in Green Flower claims that cannabis may be the next treatment for Lyme disease. Dr. Kinderlehrer is skeptical. He is clear that cannabis does not treat Lyme disease. Rather, it‚Äôs an effective treatment for some of the symptoms of the disease, such as pain, sleep disorders and anxiety. ‚ÄúCannabis modulates immune and nervous system function, and decreases inflammation. Research has not documented whether or not cannabis can boost immune function. CBD from hemp oil and cannabis extracts are not treating the infection itself,‚ÄĚ he emphasized.

‚ÄúI have found medical marijuana and CBD from hemp oil to be incredibly beneficial for many patients. The analgesic, anti-inflammatory, and neuroprotective properties of cannabis make it extremely valuable as an adjunct to the treatment of tick-borne diseases.

‚ÄúMy patients have had a significant response to extracts with decreased anxiety, cognitive improvement, pain relief, and better sleep. I recommend CBD oil from hemp during the day, because it is activating, not sedating. Add THC in the evening for pain, and Indica-sourced, pure THC for sleep.‚ÄĚ

Additionally, he stressed that ‚ÄúNone of my patients get high.‚ÄĚ

Green Flower states, ‚ÄúWhile quick treatment with antibiotics is typically enough to eliminate the disease and reduce symptoms, the side effects of Lyme disease can hang around for a while.‚ÄĚ

Dr. Kinderlehrer is quick to clarify this point, saying, ‚ÄúQuick treatment often doesn‚Äôt work. Persistent, or a recurrence of symptoms after a course of antibiotics typically represents an ongoing Lime infection and/or co-infections.‚ÄĚ

Dr. Kinderlehrer said, ‚ÄúThis information is taken out of context. It is a scare tactic. Antibiotic resistance is not a big risk when treating Lyme. In the case of Lyme, antibiotics are a necessity.‚ÄĚ He feels that the benefits far outweigh the potential risks, and that just being in a hospital is a much greater risk of developing an antibiotic-resistant infection.

Cannabis is not a proven substitute for antibiotics at this point. ‚ÄúIt is an excellent adjunct to treatment, because it decreases neuro and systemic inflammation. Cannabis is not needed for acute (or recent onset) Lyme, but more for chronic (ongoing) Lyme,‚ÄĚ said Dr. Kinderlehrer.

Lyme is still a commonly misunderstood disease, even by experts. The Infectious Disease Society of America claims there is no such thing as chronic Lyme disease. They are under the impression that, if a patient still has symptoms after being treated with antibiotics, the persistent symptoms must be due to ‚Äúsomething else.‚ÄĚ

‚ÄúMost of my patients with chronic Lyme have seen multiple physicians and have labels like chronic fatigue syndrome, fibromyalgia, migraine headaches, and mood disorders. Most all these patients not only have persistent infection with the Lyme bacteria, but also have co-infections, particularly with Babesia and Bartonella.‚ÄĚ

Dr. Kinderlehrer says the patients he and his colleagues see are ‚Äúthe tip of the iceberg.‚ÄĚ

As this nefarious bacterial disease discreetly attacks a patient‚Äôs bodily systems, many are unaware of what is happening. Because of the common symptoms associated with the condition, misdiagnosis often occurs. Dr. Kinderlehrer has one patient who went 50 years without a proper diagnosis. However, a patient who comes in and says, for example, ‚ÄúI went to Cape Cod, and now I have a bullseye rash,‚ÄĚ should be treated immediately, he said.

It is essential to receive early treatment for Lyme disease, as the illness can lead to serious side effects and related complications. If a person develops undiagnosed chronic symptoms, particularly involving the musculoskeletal and nervous systems, they should get checked for Lyme disease. The International Lyme and Associated Disease Association (ILADS) is a professional organization of physicians who specialize in these infections. They can make referrals to doctors in your area.

The IDSA says that 20-60 percent of people with acute Lyme go on to have chronic symptoms. There is no explanation why some people continue to exhibit symptoms. While hemp and marijuana derivatives are helpful to alleviate the symptoms of Lyme, for now, a course of antibiotics ‚ÄĒ for as long as necessary ‚ÄĒ is still the treatment of choice.