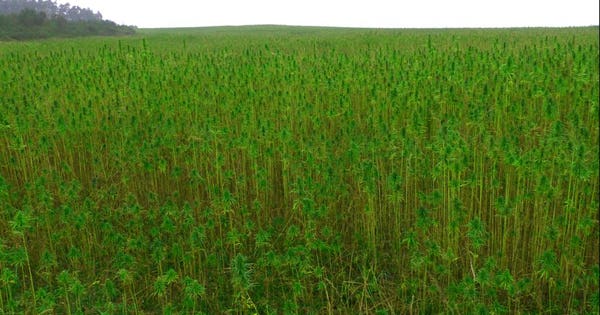 This week,¬†Senate Bill 57, sponsored by Republican legislators Brian Hill and Stephen A. Huffman, was introduced in the Ohio Senate. The bill aims to legalize hemp cultivation and processing in Ohio¬†as well as legalize the sale of hemp-derived products like CBD oil. The state-level legislation follows on the heels of December‚Äôs signing of the 2018 federal farm bill, or the U.S. Agricultural Improvement Act of 2018, which removed hemp from its illegal classification under the Controlled Substances Act.

‚ÄúThis an exciting opportunity for farmers to expand the crops they plant,‚ÄĚ said Representative Hill in a statement announcing Senate Bill 57. ‚ÄúFarmers can rotate hemp to improve soil health while earning more profit than many traditional cover crops. I‚Äôm eager to see all the ways that Ohio will benefit from this legislation.‚ÄĚ

With the passage of the 2018 farm bill, hemp now falls under the jurisdiction of the U.S. Department of Agriculture and is afforded a range of farm safety net programs that commodity crops like corn and soybeans have historically benefited from. However, if an individual state has deemed hemp an illegal substance, the crop is still off limits to growers and processors in that state. Such is the case in Ohio where hemp has been illegal to grow for decades.

‚ÄúHemp is a new topic in Ohio,‚ÄĚ says Greg May, co-founder of CannaRev Solutions, a cannabis industry consulting company located in Columbus, Ohio. May¬†is a licensed attorney in the state of Ohio. ‚ÄúThere are a lot of unknowns and questions around hemp, probably more than there are answers at this point,‚ÄĚ he says. May calls the December signing of the 2018 farm bill a ‚ÄúChristmas gift‚ÄĚ for the budding cannabis industry in the state, where medical marijuana was recently legalized.

Hemp is one of the earliest domesticated crops and is prized for its nutritious seed, its resilient fiber and its extracted cannabinoids, the most well-known of which is CBD. A botanical powerhouse, hemp has been used for centuries in the food, wellness, textile, paper, construction and manufacturing industries.

However, in recent American history the crop has suffered immensely under a case of mistaken identity with its botanical cousin, marijuana. Both plants are members of the Cannabis sativa family. However, they differ greatly in their chemical composition due to the amount of tetrahydrocannabinol, or THC, contained in each plant. THC causes marijuana‚Äôs mind-altering high. The amount of THC in marijuana can reach up to 30% while hemp, by federal law, must contain less than 0.3%. This negligible amount makes it virtually impossible to get high on hemp.

The 2014 farm bill, or the Agricultural Act of 2014, allowed the development of state-level pilot programs to study the crop. Since then, numerous states, including all those touching Ohio‚Äôs borders, have enacted hemp-friendly legislation. Many, such as Indiana and Pennsylvania, are in the process of revising their legislation to enable the development of robust hemp industries in their states.

In Kentucky, where the crop once grew plentifully, lawmakers have spent the last several years cultivating a robust hemp program. Overseen by the Kentucky Department of Agriculture, there were 210 licensed growers in the state in 2018 and more than 16,000 acres in 73 counties approved for planting. For 2019, the state‚Äôs Department of Agriculture has approved 42,000 acres for planting.

So, what does all of this mean for Ohio, in particular Ohio farmers? Agriculture is the largest industry in Ohio and contributes more than $105 billion to the economy. There are more than 75,000 farms in operation in the state. With continued dwindling crop values in 2018, exacerbated by the ongoing trade war with China, many of these farmers are looking to diversify and hemp could prove a viable option.

According to the Hemp Business Journal, the U.S. is currently the largest importer of hemp‚Äôs various components for use in the food, wellness, textile and manufacturing industries. In 2017, the U.S. hemp industry generated $820 million in sales. With policy change and growing consumer awareness, the publication projects that by 2022 the American hemp market will reach $1.9 billion. Whether or not that market moves to support primarily American growers is to be determined.

‚ÄúI can tell you there‚Äôs significant interest from farmers in hemp,‚ÄĚ says May, who has fielded a number of inquiries from growers in the state. ‚ÄúYou don‚Äôt really have to look too much further than Kentucky to see why. Kentucky is using hemp to replace the tobacco industry in the state. We don‚Äôt really need to reinvent the wheel here. We just need to look at Kentucky to see how to do this in Ohio,‚ÄĚ he says.

Two powerhouse Ohio agricultural organizations have voiced their support for the development of an Ohio hemp industry. In a recent news release, Adam Sharp, executive vice president of the Ohio Farm Bureau Federation, said: ‚ÄúWe applaud Senators Hill and Huffman for introducing legislation to help bring industrial hemp to Ohio and to allow farmers to explore the potential of this quickly growing market opportunity.‚ÄĚ

Additionally, in a statement issued last week¬†by the Ohio Farmer‚Äôs Union regarding the group‚Äôs policy priorities for 2019, Joe Logan, president of the organization, noted: ‚ÄúThe ball is in the state of Ohio‚Äôs court ‚Äď and I know that officials at the Ohio Dept. of Agriculture are aware that there‚Äôs a growing number of farmers who may wish to diversify by adding hemp to their crop rotation.‚ÄĚ

As reported by The Cincinnati Enquirer, in its current form, Senate Bill 57 will likely face heavy debate as, to start, the language in the draft legislation is void of the federal classification of hemp as containing a ‚Äúdelta-9 tetrahydrocannabinol concentration of not more than 0.3 percent on a dry weight basis.‚ÄĚ Additionally, the proposed cost for growers to pursue and maintain a license to grow the crop is currently absent in Senator Hill and Huffman‚Äôs document.

However, just starting the conversation is a promising step in the right direction as most states are advanced in the fast and furious hemp program race. ¬†Hopefully, Ohio and the state’s farmers can catch up and prosper.

‚ÄúThis is a big step forward,‚ÄĚ May says. ‚ÄúThe reality is that we‚Äôve probably lost any opportunity to have a crop in the state in 2019. Some of the urgency is gone but my hope is that they get this resolved and passed,‚ÄĚ he says¬†in regards to Ohio‚Äôs legislature.

« Working For You Concerns about drug test and CBD use Graham Hunter 10:36 PM, Feb – WRTV Indianapolis Nearly 1 in 6 Canadians Have Used Marijuana Since Recreational Pot Was Legalized – The Motley Fool »