Can CBD Live Up to the Hype? – Valley News 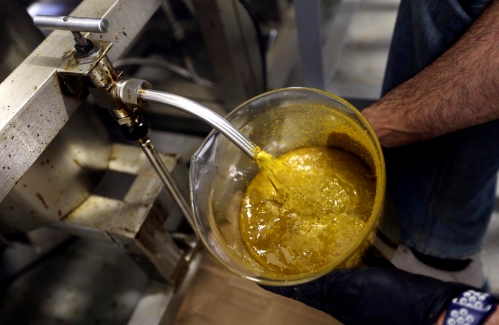 Not that long ago, I would not have been able to tell you what the acronym ‚ÄúCBD‚ÄĚ stood for, let alone what it was used for. CBD, or cannabidiol, is most commonly extracted from hemp, but it can also come from marijuana plants, which is why it is sometimes confused with its trippy chemical cousin THC. Unlike CBD, THC produces a high when smoked or eaten.

Today, we are living in a CBD world, with tinctures, ointments and vaping oils popping up everywhere. Celebrities from Gwyneth Paltrow to Willie Nelson are CBD believers, and if you frequent the right coffee shops, you can even get a shot of cannabidiol in your latte.

In my small North Carolina town, a flier at the local convenience store exhorts me to ‚Äúexperience the phenomenon‚ÄĚ of CBD products, promising it can provide ‚Äúrelief from‚ÄĚ diabetes, alcoholism, schizophrenia, back and knee pain, and other conditions.

‚ÄúEverybody who buys the product comes back and raves about it ‚ÄĒ including my mother,‚ÄĚ the enthusiastic checkout clerk says.

And, I must add, including me.

I am now taking a CBD tincture daily. After all the hype, I wanted to see whether it might have a positive impact on my lifelong struggle against depression. (To be clear, the tincture I use is based on hemp-derived CBD, which contains less than 0.3 percent THC, which is short for tetrahydrocannabinol. That‚Äôs not enough to get high even if I drank the entire bottle, several experts explained.)

Despite the growing popularity of CBD, the science supporting the claims remains pretty slim at this point. So why so much interest in a substance researchers still know so little about? I‚Äôd say hype, hope and big bucks. To date, the Food and Drug Administration has approved only one drug containing CBD, Epidiolex, for previously uncontrollable pediatric seizures. (To get the FDA‚Äôs OK, a new drug must be rigorously studied in clinical trials.)

The Hemp Business Journal estimates that the hemp CBD market totaled $190 million last year in a category that didn‚Äôt exist five years ago.

By 2022, the Brightfield Group, a cannabis and CBD market research firm, says sales are expected to reach $22 billion. The December passage of the 2018 farm bill will certainly help; the measure amended the term ‚Äúmarihuana‚ÄĚ to exempt hemp as a controlled substance as long as it contains no more than 0.3 percent THC. Laura Freeman, chief executive of Homestead Alternatives, a Kentucky maker of CBD products, told me that ‚Äúthis is the first bright spot we‚Äôve had in farming in a long time. We finally have a crop that has potential.‚ÄĚ

That‚Äôs an excellent question, says Donald Abrams, an oncologist and professor of clinical medicine at the University of California at San Francisco. In fact, he says, ‚Äúwe really don‚Äôt know anything‚ÄĚ about CBDs.

Abrams is a member of a National Academies of Sciences, Engineering and Medicine committee that issued the most comprehensive report to date on the evidence related to the health benefits of cannabis and cannabinoids.

That report did not include hemp-based CBD; it covered only CBD products that included THC derived from marijuana, also known as medical marijuana. (Remember: it‚Äôs the THC that makes users high and it‚Äôs why medical marijuana is still illegal in many states.) Abrams says, however, that in vitro and animal studies do suggest many potential therapeutic applications for hemp-based CBD.

Several studies have found CBD to be harmless, which is to say safe, but that‚Äôs very different from proving its effectiveness. Abrams told me there have been only five randomized clinical trials that have looked at CBD, until the Epidiolex studies. The largest of those studies was a 24-person trial. Yep, that‚Äôs small.

Even if there were more evidence that CBD works wonders, we would still have the question of what CBD-based products actually contain.

Not all states require CBD manufacturers to accurately label their products. With scant regulation, consumers should be skeptical. The source matters, too, since heavy metals or other contaminants have been found in some hemp grown in China or Eastern Europe.

‚ÄúPeople who are buying them on Amazon, or at their local health food store, are really working without a (safety) net,‚ÄĚ says Michael Backes, author of Cannabis Pharmacy: The Practical Guide to Medical Marijuana.

In a 2017 study, Marcel Bonn-Miller, an adjunct assistant professor in the psychiatry department at the University of Pennsylvania‚Äôs Perelman School of Medicine, said his team found that nearly 70 percent of CBD products they analyzedwere mislabeled.

About 40 percent of the 84 items were ‚Äúunder-labeled,‚ÄĚ meaning they had significantly more CBD than indicated. In addition, approximately a quarter were ‚Äúover-labeled,‚ÄĚ meaning consumers not only are paying good money for an ingredient they are not getting but also may not be getting a large enough dose to achieve any potential therapeutic benefit. More concerning, Bonn-Miller says, is that some CBD products may contain THC in amounts that could make you intoxicated or impaired

Yikes ‚ÄĒ users could inadvertently drive under the influence, test positive on a workplace drug screen or experience what Bonn-Miller calls ‚Äúa number of negative consequences, ranging from addiction to cognitive impairment, anxiety ‚ÄĒ particularly at high doses ‚ÄĒ and risk of psychosis.‚ÄĚ

Speaking of doses, just what is the right amount?

The ‚Äúrecommended serving size‚ÄĚ on my bottle of CBD tincture is 1 milliliter a day. I think I speak for most consumers when I say serving size is the way to measure chocolates, not medicines.

But the FDA won‚Äôt allow CBD producers to make any marketing claims ‚ÄĒ which includes recommended doses. Other brands may recommend a greater or smaller daily dose because doses aren‚Äôt standardized and because CBD products come in different strengths. As Abrams told me, it‚Äôs really ‚Äúthe wild west‚ÄĚ out there.

Despite these concerns, Ziva Cooper, an associate professor of clinical neurobiology at Columbia University‚Äôs Irving Medical Center, who is doing research with CBD, says ‚Äúbased on animal studies, there seems to be a lot of promise for a number of disease states,‚ÄĚ including its potential effects on inflammation, which could make it effective against multiple sclerosis, autoimmune disorders and addiction. More important, she told me, CBD may be therapeutic for ‚Äúailments for which there aren‚Äôt necessarily great medicines‚ÄĚ ‚ÄĒ such as those pediatric seizure disorders and many others.

About three months ago, I added a CBD tincture to the selective serotonin reuptake inhibitor medication I take for depression. My psychopharmacologist told me there was no specific contraindication or reason against taking both, but stressed that there‚Äôs no data on how the two behave together. There are some known contraindications with other medications, including Warfarin, codeine and oxycodone, but not SSRIs. ‚ÄúIt‚Äôs not that there‚Äôs no contraindication,‚ÄĚ Cooper said. ‚ÄúWe just don‚Äôt know.‚ÄĚ

Taking Bonn-Miller‚Äôs advice, I found the batch number on the bottle of my tincture and called the manufacturer in Kentucky to verify what‚Äôs in it. Fortunately, the label was exactly on the mark in terms of CBD content. The testing lab also confirmed there were no heavy metals in my product. I hope that reputable makers would be honest about lab analyses of what‚Äôs in their CBD products, but, if not, how would we know? The answer: We wouldn‚Äôt.

Since I‚Äôve been using CBD, my mood has been significantly elevated and stable, although I understand my experience proves nothing. The placebo effect can be strong, especially for health symptoms modulated by the brain. Cooper encouraged me to continue talking with my doctor because ‚Äúthese powerful stories, as well as evidence from preclinical or animal studies, help drive the basis for rigorous studies.‚ÄĚ

Such rigor is what‚Äôs needed to prove ‚ÄĒ or disprove ‚ÄĒ the anecdotal information about CBD. A market this size, with such enormous health consequences, should be based on more than hype and hope.