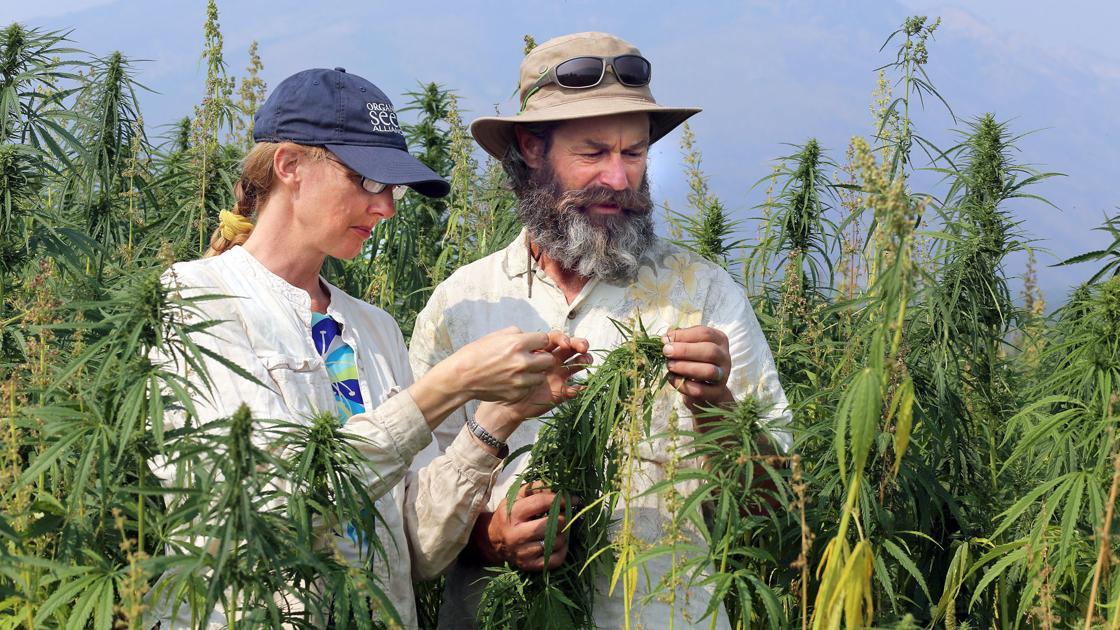 That‚Äôs what Laura Garber sees when she looks out over the acre and a half of industrial hemp growing this summer at the Homestead Organics Farms just south of Hamilton.

Well, that and sometimes Ziggy Marley.

‚ÄúI keeping having that line: ‚ÄòI see hemp fields forever. Growing wild and free‚Äô play through my mind,‚Äù she said, with a smile as she quoted Marley’s “Wild and Free” lyrics.

Garber and her husband, Henry Wuensche, are part of an agricultural experiment happening from one side of Big Sky Country to the other.

It‚Äôs one, they both believe, could reap huge benefits to the men and women whose lives depend on what the soil can produce.

From what Garber has seen and learned so far, industrial hemp could be a game changer for agriculture in the state. She‚Äôs not alone in that mindset.

This is only the second year that farmers in Montana have been able to grow industrial hemp legally.

It‚Äôs been a long time coming. The state passed legislation in 2009 allowing the production of hemp as an agricultural crop, but federal government regulations didn‚Äôt allow for it. That changed in the 2014 Farm Bill, which allowed states to create an industrial hemp pilot program.

In 2017, Montana‚Äôs pilot program licensed 14 producers who planted about 525 acres of industrial hemp.

In the program‚Äôs second year, the numbers jumped dramatically.

In 2018, 56 farmers obtained a license. On farms both large and small, they planted almost 25,000 acres of industrial hemp with 600,000 pounds of hemp seed imported from Canada.

Ian Foley, the Montana Department of Agriculture‚Äôs hemp program coordinator, said the largest of the state‚Äôs industrial hemp production occurred in northeast Montana. Much of the product that was harvested there was shipped to a plant in Eureka, where the plant was processed for cannabidiol (CBD) oil.

CBD oil is a non-psychoactive compound produced from industrial hemp that is popularly used in a variety of products. According to the Hemp Business Journal, CBD products generated $190 million in sales in 2017.

Since industrial hemp is a close cousin to the cannabis plant that produces marijuana, producers can face challenges in marketing CBD in some areas of the country. Foley said a woman recently was arrested in Wyoming after authorities discovered she was transporting CBD.

‚ÄúAt this point, it‚Äôs really difficult to determine the market and legality of that market,‚Äù Foley said.

Congress may resolve that issue in its next revision of the Farm Bill.

Considering its historical importance in the early years of this country, Garber said industrial hemp has gotten a bad rap. She believes that‚Äôs not been fair to a plant with so many positive attributes.

‚ÄúHemp seed is crazy healthy,‚Äù she said. ‚ÄúIt‚Äôs high in Omega 3 and 6. As a food product, it‚Äôs high in protein. As a source of nutrition, it could be very important to a lot of Montanans.‚Äù

The U.S. Food and Drug Administration recently approved the use of CBD to treat two forms of epilepsy.

But Garber said there‚Äôs a stigma that needs to be addressed.

While they are both cannabis, industrial hemp and marijuana are two completely different plants.

‚ÄúIt‚Äôs like comparing oranges and lemons,‚Äù Garber said. ‚ÄúWe know they are both citrus. But we also know they are different from one another.‚Äù

Both do contain tetrahydrocannabinaol or THC, which is the substance that provides a ‚Äúhigh,‚Äù but industrial hemp has only small amounts that aren‚Äôt large enough for a psychoactive effect. While recreational marijuana might contain 20 percent to 30 percent THC, industrial hemp has .3 percent or less.

Instead, Garber said industrial hemp offers a variety of health applications from its seeds and leaves and a strong fiber that can be used to make everything from a building material called hemp-crete to clothing.

Garber‚Äôs wedding dress was made from a hemp mix.

Betsy Ross‚Äô original American flag was made of hemp, she said.

Hemp is now being grown at George Washington‚Äôs Mount Vernon estate. It was added to the historical site after Congress opened the door in 2014 with the new pilot project.

In Canada, industrial hemp has been grown as a food product for decades. Foley said that country plants up to 150,000 acres annually, with much of it being grown just across the border from Montana.

‚ÄúBased on the technologies that are already in place and the seed market, we know that industrial hemp is well adapted to growing well just north of us,‚Äù he said.

Garber wants to spread the word about the potential industrial hemp has for Montana. This Saturday, she‚Äôll offer people a chance to sample hemp tea or buy a small batch of industrial hemp at farmers’ markets in both Missoula and Hamilton.

‚ÄúThe waters are really muddy about this industry,‚Äù Garber said. ‚ÄúThere‚Äôs a lot of misunderstandings about industrial hemp and the difference between it and marijuana. I want to help clear those waters and let people know what a great plant it is.‚Äù

She‚Äôs learned this summer that industrial hemp is easy to grow.

In eastern Montana, it‚Äôs being grown as a dryland crop. At Garber‚Äôs farm just south of Hamilton, it‚Äôs irrigated. On the patch of ground where the chicken coop stood last year, the plants are nearly 6 feet tall.

‚ÄúThe more I learn, the more intrigued I am and excited about the opportunities for Montana,‚Äù she said. ‚ÄúNow that it‚Äôs moving away from being illegal, it seems like there is a huge opportunity. Montana needs to jump on it. It‚Äôs good for people and it can be great for farmers.‚Äù