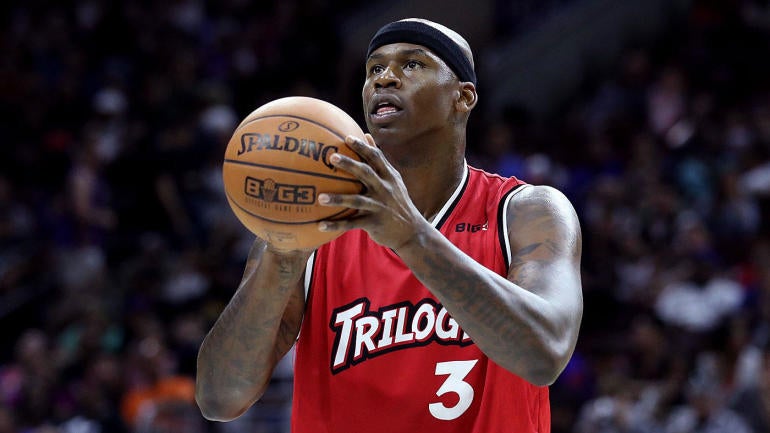 The BIG3 will announce it will legalize the use of cannabidiol (CBD) on Wednesday, league co-founder Jeff Kwatinetz told CBS Sports. This will make the BIG3 the first United States-based professional sports league to allow CBD.Â

“This is a no-brainer decision,” Kwatinetz said. “This is a medical decision. It is a medical and a humane decision. To not allow athletes to use CBD and instead to force them to use opioids is irresponsible and perhaps even disgusting. It reflects an attitude of not caring about player health.”

Kwatinetz repeatedly referenced the opioid crisis, saying that CBD is a less dangerous alternative when it comes to pain management. He said the league, which was co-founded by Ice Cube, has been discussing this decision for “at least six months.” The World Anti-Doping Agency (WADA) removed CBD from its list of prohibited substances for 2018.

“All the players we talked to have been either supportive or use it,” Kwatinetz said. “Not everyone uses it or wants to use it, but they are supportive of the right to use it. It’s a safe medicine that addresses pain.”

The second BIG3 season began last week in Houston. The legalization of CBD in the league is effective immediately.

“Hopefully us doing this for our players will also send a message out there that we need to make decisions not based on politics but based on medical data and actually treat each other humanely,” Kwatinetz said.Â

Al Harrington, who got in the cannabis business after his 16-year NBA career ended and plays for Trilogy in the BIG3, told CBS Sports that he is glad “this league was enlightened enough to allow” CBD use. The following Q&A with Harrington has been condensed and lightly edited for clarity and flow:

CBS Sports: The BIG3 is allowing CBD use — what is significant about this to you?

Al Harrington: Over the last couple of days, there’s been a lot of announcements and stuff like that. There’s now a pharmaceutical cannabis drug on the market. The government is trying to allow vets to be able to use cannabis and give ’em more access to cannabis. And then from a sports standpoint, being that the BIG3 will be the first professional league to allow CBD use in the league, I think it’s just huge.Â

I’ve been an advocate, obviously, for a while about this. It’s taken me some time to actually convert some other athletes to this side. You know, they had their connotations or different ways that they felt about it, or information they had that was inaccurate, to the point where I was able to get them to try different products. Basically, mostly creams and stuff like that. And it’s helped them so much that it’s allowed them to stop taking Advil, different things like that, because they can manage their pain through CBD products.Â

CBS: Do you think people respond differently when it’s a cream or an oil?

AH: Yeah, definitely. Because they think it’s not as invasive. It’s like a what-can-really-happen-to-my-skin type thing. Even older people, even people my mom’s age and my grandmother’s age, I always say the introductory product is usually some form of a cream, a topical, that gets people to first try it. And then usually after that it goes to like a tincture or an edible before they would even try smoking a product.Â

CBS: I was literally talking to my mom about CBD the other day, and it’s really not something we would have discussed years ago. Have you found that the conversation about it has shifted recently?

AH: Yeah, definitely. I mean, even within the industry in general, the fastest [growth] is women and older people. Baby boomers. Because I think that there’s more stories coming out and then there’s more people who are now having these experiences and telling other people about it. From managing pain to people who have cancer and HIV and use cannabis to treat those type of real serious types of things. I think the more that we get a chance to tell our stories and people can give their stories about how cannabis has helped them, I think the stigma will continue to change.

CBS: I know you started using CBD when a knee surgery went wrong. How different was it from painkillers and how did it become such a big part of your life after that?

AH:Â It was just amazing for me. I had a knee surgery, I consider it a botched knee surgery. I had a staph infection and the infection actually got into my bloodstream and I had to get three or four cleanouts, I had to put a PICC (peripherally inserted central catheter) line in my arm that allowed me to deliver medicine — it went into my heart cavity, for the most part, to distribute throughout my body. It was a very serious issue that I was dealing with. And obviously, going through that type of surgery and stuff like that, you have nothing but pain pills to get through that.Â

When I was going through it, it was tough because I couldn’t do anything while I was on the pain medication. All I could do was sleep and I was just drowsy, in and out of conversations, things like that. I had this lady, her name was Chloe, she pretty much had come to see me and people that were visiting me when I was up in Vail, and she was just like, ‘Hey, man, like, you look crazy right now.’ She was like, ‘Have you ever tried CBD?’ and I was like, ‘No.’ She was like, ‘Here, you need to try this.’ She gave me some tinctures, she gave me some oils, she gave me some capsules that had some THC in them as well. And I just took a leap of faith. Even though I had already seen what it had done for my grandmother, when it’s your own situation you’re dealing with, it’s a little different, you know? And I tried it. I have not taken a pharmaceutical or anti-inflammatory pain pill since. Ever since that happened — and I’ve had three surgeries since then — I managed all of my pain through cannabis.Â

CBS: Did you know the interview you did with David Stern interview would blow up like it did?

AH:Â No, I did not know it was going to blow up like that. Obviously I knew it was groundbreaking, once he said what he said. I did not think he was going to do that — I thought it was going to be a discussion where I was just hoping that I could get him to say that the NBA needed to be open-minded to it, period. But he went a step further and said that he thinks that in the states where these guys are playing where it’s legal, that they can use or they can consume medicinal cannabis for medicinal issues, that they should have that right. Especially because, like I always talk about, these pharmaceutical drugs with these side effects, it’s just ridiculous. I still don’t understand how it’s legal when you can take a drug that can actually kill you. You know what I’m saying? It just doesn’t make sense to me.Â

CBS:Â Specifically with the BIG3, how do you think CBD can help the athletes?

AH:Â It’s a big deal. I’m already supplying a bunch of the guys with creams and stuff like that they’ve been using since last year. They’re firm believers. They’ve been using it already. It’s funny, after Week 1, I got like six different requests from players like, ‘Yo, you need to bring some creams this week when we get to Chicago.’Â

I think it’s amazing because, like I said, we all understand the risk we put our bodies through throughout our careers. For me, I’ll use myself as an example: I used Celebrex, an anti-inflammatory â€¦ I took two in the morning, one at night. You know what I’m saying? That was the only way that I felt good enough to be able to go out and play. And at the end of the day, did I know the side effects? Yes. But at the end of the day, I had to provide for my family. So it was a risk I was willing to take. But now that I know, now that I’m educated and I’m awake, knowing that cannabis could have been an alternative way that I could have been medicating myself the whole time without all those serious risks, putting my body and my life in that type of danger — for me, you think about guys that get addicted to the pain pills and different things like that.Â

CBS:Â Do you see this as sort of a Step 1? This isn’t the same as saying THC or medicinal marijuana or recreational marijuana is allowed.Â

AH:Â You gotta take baby steps. You gotta start somewhere. And the one thing they’ll never be able to take away from us as a league is that we were the first professional league that allowed cannabis use. Even though it’s CBD. I think it starts here, and as we get more educated and different things like that, and some of the research stuff that I’m working on, where I can present to Jeff and Cube that, OK, these products with THC are good, too — you should consider allowing players to use products with THC as well. But it’s a process.

CBS:Â How proactive were you in making this happen?

AH:Â Very. I feel like every time I talk to them, it’s always something about cannabis. I’m sure they’re sometimes like, ‘Is there anything else you want to talk about?’ Every time I learn something, I try to put it on their plate. Information and education is key to it all, the more educated you are, the better decisions you can make, the more informed decisions you can make. And that’s where we are on this issue. We really have to push the envelope on educating people as much as we can so that they know that this is not the drug that you grew up thinking that it was. Not at all. This thing has showed that it has helped a tremendous amount of people deal with a lot of things. We’re here to change that stigma. I’m happy that I’m one of the pioneers of making that happen, and I’m happy that Cube and Jeff and the BIG3 pretty much have joined me in that crusade. We’re just going to continue to keep pushing forward.

« Carly Simon and Her Family, on Martha’s Vineyard The Effects of Marijuana on Cancer Treatment »