Ben Franks: The world of CBD, working with James Haskell and the aims for the Saints – Talking Rugby Union 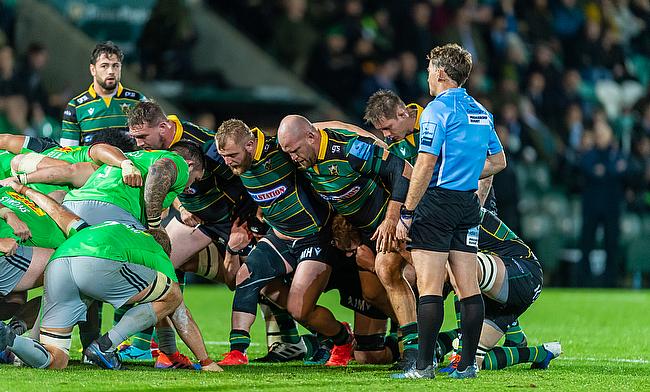 Ben Franks, along with James Haskell, led a HIIT workout this week to celebrate the launch of their new CBD brand

Speaking to two-time World Cup winner Ben Franks after Northamptonâ€™s dramatic 35-31 victory over Wasps at the Ricoh Arena, Joe Harvey talks to the legendary prop about his new CBD oil brand, IMPACT CBD, his business partner James Haskell, and how things are going at the Saints.

â€śI, sort of, stumbled over it really,â€ť Franks says as we begin our conversation about discussing his new CBD oil brand, IMPACT CBD.

â€śI had it recommended to me a good few years ago now. I had no idea what it was, researched, saw it had been used amongst NFL players and I decided to try and use it for a while.

â€śI then sustained some correspondence with people in Israel where a lot of the research is done and got invited to a CBD and hemp convention and it went from there. Once I had seen where it was going, I enquired into ways of being a part of it. The timing was quite good because James Haskell joined Saints at the same time as me and we had been talking about it.â€ť

Franks and Haskell announced their partnership in the summer, launching the IMPACT brand some time before then, working alongside industry heavyweights CiiTECH, who produce the product. Both have already set-up separate businesses, with Franks having a gym in Christchurch that he runs with his brother and Northampton teammate Owen Franks. Haskell, meanwhile, has an array of commercial success, from books to public speaking and has most recently been seen on ITVs Iâ€™m a Celebrity Get Me Out of Here.

A move into the sports supplement market is a step into the unknown for both of them, though. The use of CBD oil has grown in sports over the past year or so and is essentially cannabis with the psychoactive element of tetrahydrocannabinol (THC) removed. This is what makes brands like IMPACT CBD legal and a recognised medical treatment across the world.

Former All Black Franks was recommended CBD oil when recovering from a concussion. Having seen several close friends and colleagues suffer from the head injury, understandably, franks was concerned by the long-term effects of his injury.

â€śI recovered from my concussion quite quickly, but I definitely wouldnâ€™t say thatâ€™s because of CBD,â€ť Franks said. â€śSome people just recover from it quicker than others. What I did notice straight away was that my quality of sleep had improved a lot.

â€śWith rugby, youâ€™ve always got some sort of pain. Iâ€™d always sleep well, but Iâ€™d roll over in my sleep, onto a leg that was sore or something and have a broken sleep. What I noticed was that my sleep was uninterrupted, I had a deeper sleep and felt better in the morning.â€ť

With Franks and Haskell there probably couldnâ€™t be two more contrasting characters. Haskell has been known to push himself into the limelight, with his recent appearance on national television being testament to this. In contrast, Franks is a lot more reserved, quieter and cerebral.

Both, however, do share a passion for health and fitness. For some years now, Franks has trained with strength and conditioning coach Ed Cosner across the United States with Cosner having coached the San Antonio Spurs, as well as various high-profile athletes.

Similarly, Haskell has had three health and fitness books published, runs a gym facility in Bath and is a fixture on the House of Rugby Podcast. With just a year between the partners, it canâ€™t be entirely surprising that the pair hit it off and are now in business together, along with CiiTECH.

â€śThereâ€™s a few sides to James,â€ť Franks said. â€śHeâ€™s very detailed in his training, so we clicked on that side of things. Weâ€™ve got a lot in common and at the time we met, we were both in out thirties and both enjoyed a coffee. So, thatâ€™s how our friendship came around.

â€śI know my strengths and limitations. Iâ€™m quite comfortable talking about CBD and those bits and pieces, but you have someone that is going to knock the door down a little bit and get the product out. CBD is closely related to THC, which has a stigma around it, so there is quite a lot of barriers you are trying to knock down at the same time that James has been great at doing.â€ť

So far for his club side this season, Franks has made six appearances, three from the beginning and three more from the bench. Currently second in the Premiership table, Saints have had a promising start to the domestic campaign, most recently defeating Wasps when they only had 13 players on the field after a red card to wing Tom Collins and a sinbinning for Cobus Reinach late in the game.

In his second season with Northampton, Franks has only experienced good things in the Midlands. He reached the semi-final stages last season and as things stand, although still early in the competition, the Saints could get a home semi, massively increasing their chances of a shot at the title in Twickenham, with Franks optimistic about their chances.

â€śLast year we were in the top four, so obviously you know you need to make improvements to get better and give yourself a chance again,â€ť Franks added. â€śI think weâ€™ve got as good a shot as any this year, but it is the easiest thing just saying we want to win a title, there is a lot of water to go under the bridge yet.

â€śWeâ€™ve got a young team, so Iâ€™m sure Northampton is going to be strong for a few years and challenge for a number of things, but all teams are saying the same. The way things are at the minute, hopefully we can give ourselves the opportunity to play for some silverware.â€ť

Northampton also resume their European Champions Cup campaign when they host Benneton this weekend with the Saints aiming to keep their quarter-final hopes alive in Pool 1.