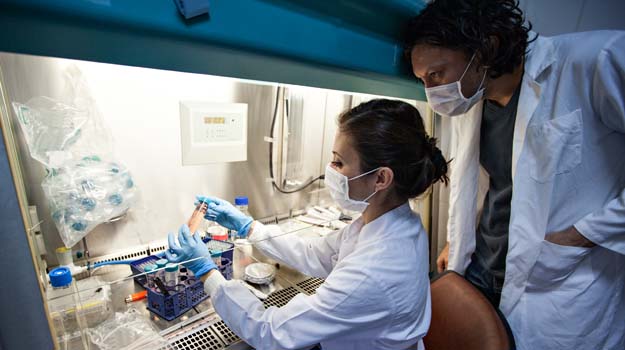 There are plenty of great scientific research stories out this week. Here‚Äôs a look at just a few of them.

Researchers with Queen Mary University of London and Curtin University, Australia published research in the journal Oncogene that used a naturally occurring component of medicinal cannabis with chemotherapy to treat pancreatic cancer in mice. The chemical was Cannabidiol (CBD), which does not have psychoactive effects, and¬†was given to mice with pancreatic cancer along¬†with chemotherapy drug gemcitabine. ‚ÄúCannabidiol is already approved for use in clinic,‚ÄĚ said lead researcher Marco Falasca from Queen Mary College, in a statement, ‚Äúwhich means we can quickly go on to test this in human clinical trials. If we can reproduce these effects in humans, cannabidiol could be in use in cancer clinics almost immediately, compared to having to wait for authorities to approve a new drug.‚ÄĚ

The combination, as the authors say in the article, led to ‚Äúsignificantly prolonged survival. Importantly, KPC mice treated with a combination of the GPR55 antagonist Cannabidiol (CBD) and gemcitabine (GEM, one of the most used drugs to treat PDAC), survived nearly three times longer compared to mice treated with vehicle or GEM alone.‚ÄĚ It also appeared to overcome some of the resistance found in GEM treatment. And CBD is well known for improving the side effects of chemotherapy, such as nausea, diarrhea and vomiting.

Metformin is one of the top first-line treatments for type 2 diabetes, as well as a common treatment for ‚Äúmetabolic syndrome‚ÄĚ or pre-diabetes. Yet it‚Äôs not completely understood. It is known that it inhibits hepatic gluconeogenesis, but the molecular mechanism of that prevention isn‚Äôt completely clear. Researchers at Yale University published research in the journal Nature Medicine that sheds some light on this activity. The authors, working with normal and diabetic rats, concluded that metformin, ‚Äúat clinically relevant plasma concentrations, inhibits hepatic gluconeogenesis in a redox-dependent manner independently of reductions in citrate synthase flux, hepatic nucleotide concentrations, acetyl-CoA carboxylase activity, or gluconeogenic enzyme protein expression.‚ÄĚ

Phase I and Phase II clinical trials sponsored by Regeneron Pharmaceuticals¬†and Sanofi¬†published data in The New England Journal of Medicine showing that cemiplimab, a PD-1 inhibitor, appears effective in treating advanced cutaneous squamous-cell carcinoma. The Phase I trial was in a cohort of patients with locally advanced or metastatic cutaneous squamous-cell carcinoma. The Phase II trial was for a cohort of patients with metastatic disease. Patients in both trials received an intravenous dose of cemiplimab every two weeks and were assessed every eight weeks. In the Phase I trial, a response to the drug was seen in 50 percent of the 26 patients. In the Phase II study, a response was seen in 28 of 59 patients. In the 28 observed, the duration of response exceeds six months in 57 percent of the patients and 82 percent continued to show a response and to receive the antibody at the time of data cutoff.

Byproduct of a Gut Bacteria Protects Against Salmonella

Salmonella is a type of food poisoning that,¬†according to the U.S. Centers for Disease Control and Prevention (CDC), causes about 1.2 million illnesses in the U.S. each year, 23,000 of which require hospitalizations, and 450 deaths. It is caused by a bacterium called Salmonella, and it causes diarrhea, fever and abdominal cramps between 12 and 72 hours after infection. It usually lasts four to seven days. People usually recover without treatment.

Researchers at Stanford University¬†School of Medicine identified a molecule that acts as natural protection against most intestinal pathogens like Salmonella. The molecule, propionate, is a byproduct of a group of bacteria called the Bacteroides. In mice, propionate inhibits the growth of Salmonella in the intestinal tract. This explains why some people seem resistant to food poisoning and other stomach bugs and could lead to the development of better treatments. Their work was published in the journal Cell Host and Microbe.

‚ÄúThe gut microbiota is an incredibly complex ecosystem,‚ÄĚ said Amanda Jacobson, the paper‚Äôs lead author and a graduate student in microbiology and immunology, in a statement. ‚ÄúBecause of this, it is very difficult to identify the unique molecules from specific bacteria in the gut that are responsible for specific characteristics like resistance to pathogens‚Ä¶. Collectively, our results show that when concentrations of propionate, which is produced by Bacteroides, in the gut are high, Salmonella are unable to raise their internal pH to facilitate cellular functions required for growth. Of course, we would want to know how translatable this is to humans.‚ÄĚ

GLP-1 analogs stimulate the pancreas to produce insulin. They also reduce appetite by slowing the emptying of the stomach, which can lead to weight loss.

There has been growing evidence that abnormal insulin signaling in the brain plays a role in the progression of Parkinson‚Äôs. Before this data was published in Nature, researchers knew that insulin signaling is important for the survival of brain cells. Brain cells require glucose to survive, and insulin regulates glucose in the brain.

Dopaminergic cells are the types of brain cells dying in Parkinson‚Äôs, and they have a particularly high percentage of insulin receptors on their cell membranes. This suggests they will be more sensitive to insulin signaling pathway problems. GLP-1 analogs stimulate the GLP-1 receptor, mediating problematic insulin signaling pathways in patients with diabetes. The problem, however, is these analogs don‚Äôt typically cross the blood-brain barrier very well. Most do to some extent, except for Eli Lilly‚Äôs Trulicity, which does not. In the study, an extended-release form of AstraZeneca‚Äôs Bydureon was engineered to more easily cross the blood-brain barrier, and diabetic rats¬†showed sustained levels of the GLP-1 analog in the blood for more than 20 days.

Thalidomide was first marketed as an over-the-counter sedative in West Germany in the 1950s under the trade name Contergan. A little later, it was marketed as an anti-nausea medication and to alleviate morning sickness in pregnant women. In 1960, the U.S. Food and Drug Administration (FDA) rejected the drug for morning sickness over concerns about side effects.

It was also marketed in the UK, Australia and New Zealand as Distaval. Although never approved for marketing in the U.S., it was distributed for testing purposes.

Not long after the drug was approved in Germany, children began being born with phocomelia, a malformation of the arms and hands. Approximately 40 percent of those afflicted survived. Worldwide, about 10,000 cases were reported, with a global survival rate of 50 percent. The most common defects were ‚Äúflipper-like hands‚ÄĚ or even stumps. There were other effects as well, including eye and heart deformities.

A full understanding of how thalidomide caused drug effects has eluded researchers, but now scientists at the Dana-Farber Cancer Institute published research in the journal eLife that describes its method of action. It acts by degrading a wide range of transcription factors, cell proteins that turn genes on or off, including one known as SALL4. This causes SALL4 to be completely absent from cell, which interferes with limb development and other parts of fetal growth.

‚ÄúThe similarities between the birth defects associated with thalidomide and those in people with a mutated SALL4 gene are striking,‚ÄĚ said Eric Fischer of Dana-Farber, lead author of the study, in a statement. ‚ÄúThey make the case even more strongly that disruption of SALL4 is at the root of the devastation produced by thalidomide in the 1950s.‚ÄĚ

Thalidomide has made something of a comeback, or at least redeemed itself. It was approved for use against leprosy in 1998, and in 2005, Celgene¬†Corporation received approval for its version of thalidomide, Revlimid, for mantle cell lymphoma, and a year later, for multiple myeloma. Thalomid, Revlimid and Pomalyst are all variations of thalidomide.