As pet owners try CBD oil, vets weigh in on whether its safe 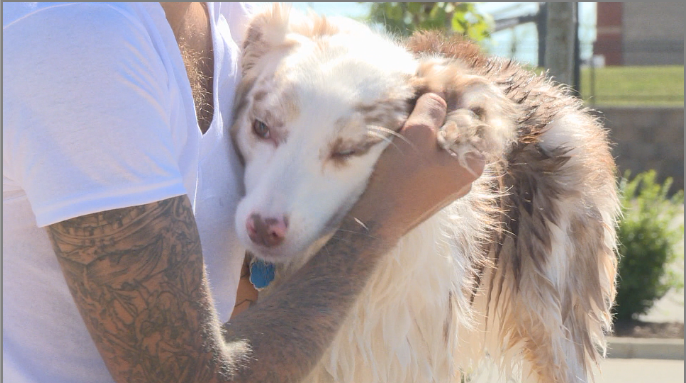 MADISON (WKOW) â€“ Since Wisconsin lifted its legal restrictions on CBD in 2017, the products have lined the shelves of health stores.

Many who use it call it a fix-all drug for pain, stress or simply a supplement for healthy living and now many are trying it out on their pets hoping for the same benefits.

Erin Blohm said she had been using the product on herself for awhile and brought some home with her when she was visiting her parents and their aging family dog.

Blohm said she wanted to give the oil a try.

â€śShe’s a 14-year-old golden, so just as far as helping her get around a little bitÂ easier,â€ť she said. â€śHer hip joints are pretty much shot at this point. It just helps her be more comfortable with the pain side of things.â€ť

Once she saw its impact on her family dog, she wanted to try it on her younger pup, Pep, primarily to address his anxiety.

â€śJust not getting as worked up and walking around like pacing around the apartment whining,â€ť she said.

Since using the oil, Blohm said Pep has been noticeably calmer and healthier in other ways.

â€śHe tends to cough a lot,â€ť she said. â€śSo it’s helped a lot more with him as far as coughing a lot at night.â€ť

â€śA lot of people bring it up with me,â€ť she said.

As a vetÂ specializing in holistic, less traditionalÂ medical treatment, Dr. Donahue said she’s looked at a number of cases where CBD oil has made a big difference when it comes to animal pain management, anxiety or seizures. Although she said she understands why you’re not likely to get a prescription from your average vet.

â€śI think a lot of conventional veterinarians are hesitant to use something that doesn’t have a lot of research behind it,â€ť she said.

CBD oil is also not regulated by the FDA and according to the Wisconsin Veterinarian’s Office, they don’t advise using the oil because it’s against federal law. It’s a reminder of the legally gray area surrounding CBD oil. In his most recent statement in May, Attorney General Brad Schimel asked law enforcement not to take action against CBD products made from legally grown industrial hemp.

Tim O’Brien, owner of the health store, Apple Wellness, said he’s been selling CBD oil for people and pets under those conditions and assures his customers, his products have less than 0.3 percent THC, the ingredient in marijuana that causes the high.

â€śThere’s no concerns for toxic levels, so provided that we’re using it responsibly there wouldn’t be a concern there,â€ť he said.

Although Dr. Donahue advises anyone interested in using CBD to be very cautious where it’s coming from, because higher levels of THC are not only illegal but can be toxic to pets. That’s also why she said it’s important to distinguish CBD oil from marijuana. Dr. Donahue said an animal should never consume marijuana that would be toxic for the same reason.

â€śThat’s why I recommend that pet owners talk to their veterinarian,â€ť she said.

Dr. Donahue said it’s incredibly important to know where the oil is coming from and what exactly is in it, because it’s not FDA regulated.

â€śThe oil that I carry here in my clinic is from just a few sources. I know the owners of the company,â€ť she said. â€śI know where the CBD oil is coming from, how it’s processed, so I trust the companies.â€ť

With dozens of brands available online that’s not always the case. That’s why O’Brien said he makes a point to get a certificate of analysis whenever he gets CBD products.

â€śThis proves to the seller, the buyer and to the consumer that it is matching the legal requirements,â€ť he said.

If you follow her guidelines, Dr. Donahue said she can’t guarantee CBD oil will help your pet, but if you’re using a safe source and the proper dosage, she said it shouldn’t hurt.

For owners like Blohm, it’s been worth the try.

â€śHe’s had a lot of health issues that we haven’t had a lot of answers on so I just thought it was something that we could give a go and he seems to be doing well with it,â€ť she said.