What’s REALLY in trendy CBD oil? Mother discovers product she bought to tackle anxiety contains four times the legal limit of THC – while other varieties have no cannabidiol

By Leigh Mcmanus For Mailonline

High street shelves are groaning with CBD-infused products, promising to do everything from help you sleep at night to easing anxiety, but are they really worth your money?¬†

The component of CBD oil is cannabidiol, which is derived from cannabis, but because it doesn’t contain THC it’s not psychoactive, meaning it does not create a ‘high’ when taken.

However, an investigation by the BBC has revealed that varieties available online and on the high street can contain up to four times the legal limit of THC, while others have no CBD at all.¬†¬†

Researchers put CBD oil to the test at the request of mother-of-one Natalie, from Wakefield, who bought a bottle – from an unnamed brand – online, in the hope of easing her anxiety.¬†

But, she was nervous about taking it without knowing what was really in it, or how it would interact with her anti-depressants, and was alarmed when researchers found the product she’d bought contained four times the legal limit of THC.¬†¬†

As part of their report, the BBC also tested 12 other bottles from different companies and found that nine were found to contain THC, with two being over the legal limit, while one¬†was found not to contain any CBD at all.¬† 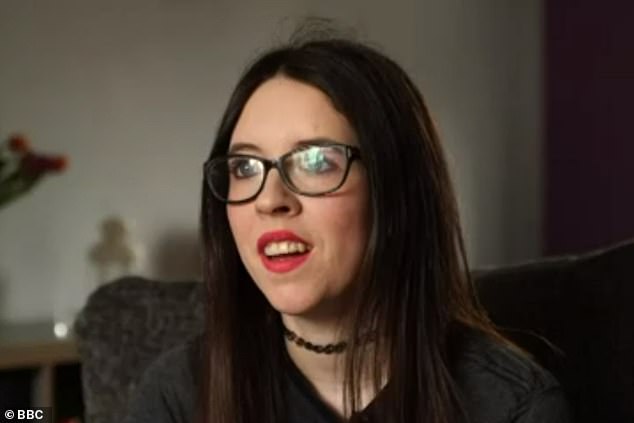 Natalie, from Wakefield, has been prescribed anti-depressants to help with her mental health, and told the BBC she bought a bottle of CBD oil over two months but hasn’t used it yet

UK law restricts THC in cannabis products to 1mg or less, regardless of container size.¬†

As part of the BBC report, Natalie met with a hemp farmer and a scientist, in a bid to better understand CBD oil’s side effects, and found out the complexities around the oil and its production.¬†

‘I’ve had anxiety for some time, but I’m a mum to a three-year-old little boy now so it’s something I’d like to see the back of,’ she said.¬†

Tetrahydrocannabinol (THC) and cannabidiol (CBD) are both derived from the cannabis plant.¬†

Together, they are part of the cannabinoid group of compounds found in hashish, hash oil, and most strains of marijuana.¬†

THC interacts with CB1 receptors in the central nervous system and brain and creates the sensations of euphoria and anxiety.¬†

CBD does not fit these receptors well, and actually decreases the effects of THC, and is not psychoactive.¬†

CBD is thought to help reduce anxiety and inflammation.¬†

Natalie said that her prescription drugs were not ‘pulling me through’, but ‘conflicting advice’ about using CBD oils and other products made from cannabis made her hesitate.¬†

‘You get to a point where you’d try anything, especially when it’s being advertised as something more natural’, she said of the oils which can have a relaxing effect.¬†

Natalie then went to East Yorkshire Hemp near Hull to meet with a farmer to ask him questions about cannabis, finding out that – due to restrictive UK laws – CBD oil sold in the UK is produced abroad because farmers here aren’t allowed to harvest the leaf and flower parts of the cannabis plant.¬†

She said: ‘Before my research into CBD oil I presumed it was all made in the UK. From what I’ve read, nowhere states differently.¬†

‘Having learnt today that local home-grown farmers can’t even use the bits that make the CBD, it throws you into a bit of doubt and confusion once again.’¬†

Natalie then went to meet a scientist in the¬†Institute of Psychiatry, Psychology & Neuroscience of King’s College London who is an expert on the subject.¬† 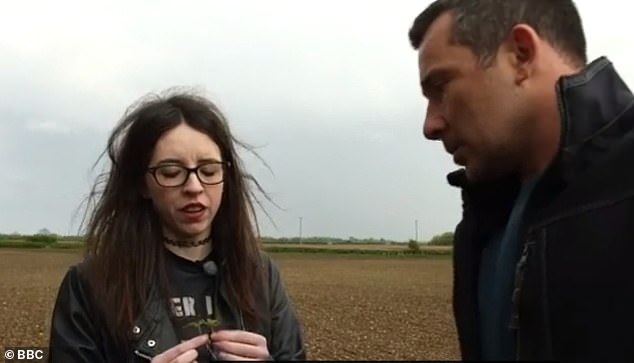 Natalie met with a hemp farmer (pictured), a scientist and tested the product at a laboratory in a bid to understand its effects better – before discovering her bottle contained over the legal limit¬†

Dr Elizabeth Appiah-Kusi told Natalie that CBD is ‘relatively safe and well-tolerated’ based on her study of people who were given the ingredient as a treatment for psychosis, but a much higher dosage than Natalie’s 2.5mg of CBD per drop.¬†

Speaking on the widely-available high street version Natalie had bought, she said scientists don’t know whether it works, as reported by many users, or if that’s merely ‘a placebo effect’.¬†

She advised that a person considering using the oils should always speak to their doctor first, because it isn’t known how the substance reacts to other medication.¬†

In a bid to ‘see what’s inside’ what she bought, including how much CBD, Natalie visited a laboratory in Essex and after various tests, found out that her bottle contained over the legal limit of THC.

This matched what the unnamed company said on its website, but still didn’t comply with UK regulations.¬†¬†

CBD oil is a legal cannabinoid that can be sold in the UK.¬†

CBD contains less than 0.2 per cent of the psychoactive substance THC.

Although the oil has been thought to have some medicinal properties, including relieving inflammation, pain and anxiety, there is no conclusive science.

Suppliers in England and Wales have to obtain a licence to sell CBD as a medicine.

Manufacturers are able to avoid the strict regulation by selling it as a food supplement – ignoring the lengthy process of gaining a medicinal licence.¬†

Government advisers at the MHRA found that CBD has a ‚Äėrestoring, correcting or modifying‚Äô effect on humans.

Billy Caldwell, from Castlederg, Northern Ireland, made headlines last April when he became the first Briton to be prescribed it on the NHS.¬†

Cannabis oil, which reportedly has no side effects, influences the release and uptake of ‚Äėfeel good‚Äô chemicals such as dopamine and serotonin.¬†

Natalie smells her bottle of CBD oil as she chats with a scientist who studies the effects of the oil, albeit in a higher dosage, in people with psychosis¬† 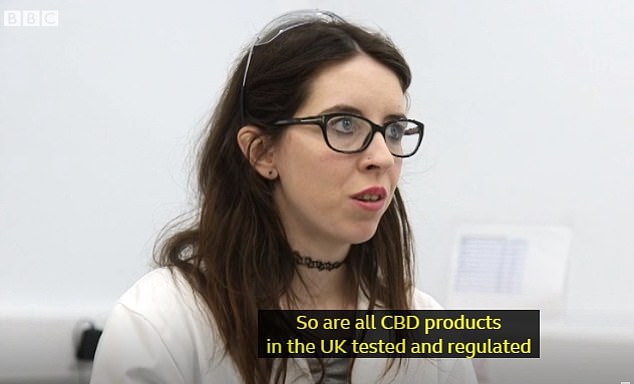 In a bid to ‘see what’s inside’ what she bought Natalie visited a laboratory in Essex and after various tests, found out that her bottle contained over the legal limit of THC for the UK

Simon Manthorpe, the Chief Executive of Eos Scientific – who ran the tests – reassured Natalie that the 4mgs of THC in the product she’d bought wouldn’t ‘do anything notable to a person’.¬†

He added: ‘You’d have to have a considerable amount of THC in there for there to be a psychoactive response.’¬†

He added further that the CBD content was ‘pretty much spot on’ in regards to what the producer of Natalie’s bottle had advertised.¬†

His advice to Natalie was: ‘Don’t worry, the THC content in there is very, very low. Don’t fear CBD products as a result of this experience.’ 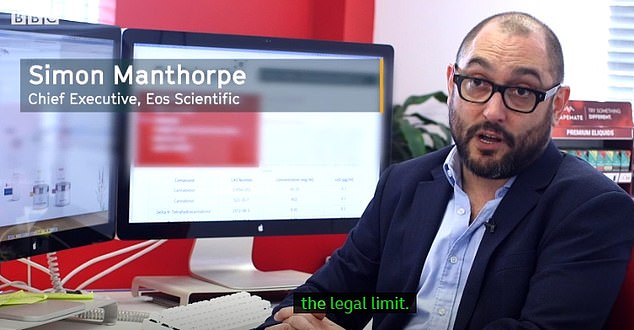 Simon Manthorpe, the Chief Executive of Eos Scientific – who ran the tests – said that the 4mgs his company found in Natalie’s sample ‘isn’t going to do anything notable to a person’

Despite this, Natalie said she wasn’t quite ready to try the oil. She said: ‘From what I have learned so far, I don’t think I’m ready to take CBD oil just until a few more studies and tests have been completed.¬†

‘I’d never say no to taking it, especially because it’s becoming more prominent in the media and in the research labs, so I’d definitely keep an open mind about taking it.’

Jersey Hemp this week became the first company in the British Isles¬†to get a licence to harvest hemp flowers for cannabidiol oil (CBD).

The island’s government has granted the company a licence to harvest, process and store the hemp flower for the production of CBD goods in an industry that is projected¬†to be worth ¬£1bn in 2025.¬†

« Try These Terpene-infused Products to Improve Your High – Weedmaps News CBD for Opiate Withdrawal: How Much Can It Help? – Greencamp »