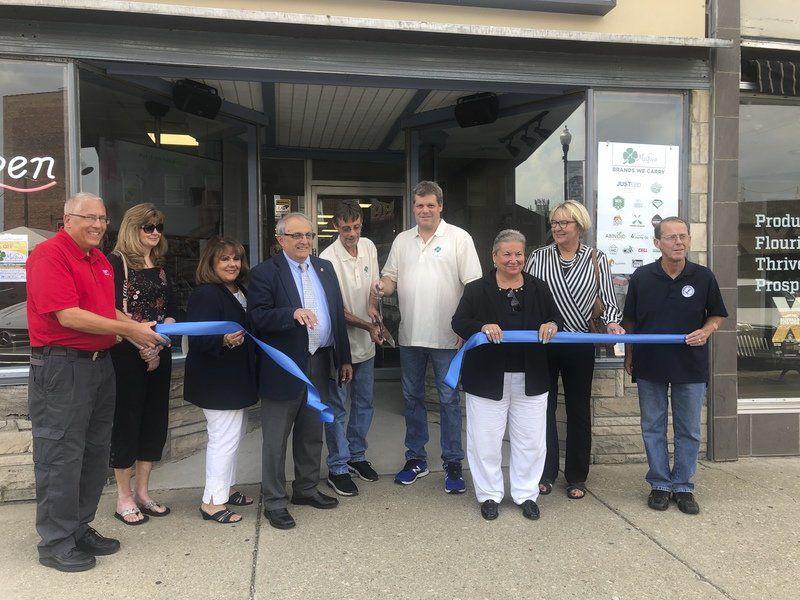 NORTH TONAWANDA ‚ÄĒ Jim and Jason McGirr have seen first-hand how the use of cannabidiol (CBD) can be used to help people.¬†

When Jason McGirr sustained injuries following a car accident, he tried CBD to help with the pain and it went a long way toward easing his pain. So the two brothers decided to go into CBD business for themselves.¬†

Though they‚Äôre been open since July, McGirr‚Äôs CBD shop held a ribbon cutting ceremony on Tuesday to officially celebrate the opening of their new business on Webster Street in North Tonawanda. The shop sells a large variety of CBD products for both human and animal consumption that are designed to help with aches and pains, anxiety and insomnia, among other things.¬†

‚ÄúThere was a little girl with seizures, they tried everything,‚ÄĚ Jim McGirr said. ‚ÄúHer mother put her on CBD and it virtually eliminated all her symptoms.‚ÄĚ He added that the¬†U.S. Food and Drug Administration has since listed¬†CBD as an approved treatment for seizures.¬†

McGirr‚Äôs carries CBD products that come in various forms including oils, foods, soaps, lotions and more. They also come in various strengths. Jim McGirr said products range from 50 to 2,000 mg and the recommended dosage would vary depending on the patient and their particular needs.¬†

He explained that CBD has a similar affect on animals, noting that they carry a selection of oils, sprays and even treats that can help pets cope with some of the same issues that people after, particularly anxiety. Jason McGirr said that the list of ailments that CBD can help with is ‚Äúvery long,‚ÄĚ though his brother emphasized that CBD is not a ‚Äúcure-all‚ÄĚ rather something to help manage symptoms.¬†

Though CBD does come from the cannabis plant, from which marijuana is derived, Jim McGirr emphasized that CBD products don‚Äôt contain THC (tetrahydrocannabinol), which is the chemical in marijuana that makes users feel high. CBD offers similar medical benefits, but without the intoxicating affect.¬†

‚ÄúCBD has everything in it except the THC,‚ÄĚ Jim McGirr said. ‚ÄúThe THC is what makes you high, what gives you that buzzed feeling. When you come down from it, it‚Äôs what gives you the munchies, or headaches or cotton mouth. CBD doesn‚Äôt have that part.‚ÄĚ¬†

He noted a significant part of the business is an educational component. The shop is filled with brochures, videos and even books that explain how CBD affects the body, how to properly administer it and how stands to benefit from it.¬†

North Tonawanda Mayor Art Pappas, who was in attendance at the ribbon-cutting ceremony on Tuesday, said that if there‚Äôs a chance that CBD products can be used to help people, then its worth considering its potential.¬†

‚ÄúI think it has a lot of possibility,‚ÄĚ he said. ‚ÄúEveryone‚Äôs needs are a little different and some of these products, if they can help people with certain ailments and afflictions, it might be what some of these people have been waiting for.‚ÄĚ¬†

For more information on McGirr‚Äôs, find them on Facebook, Twitter or Instagram and a website for the business will be launched soon. McGirr‚Äôs is located at 70 Webster St. and can also be reached by phone at 957-3660.¬†