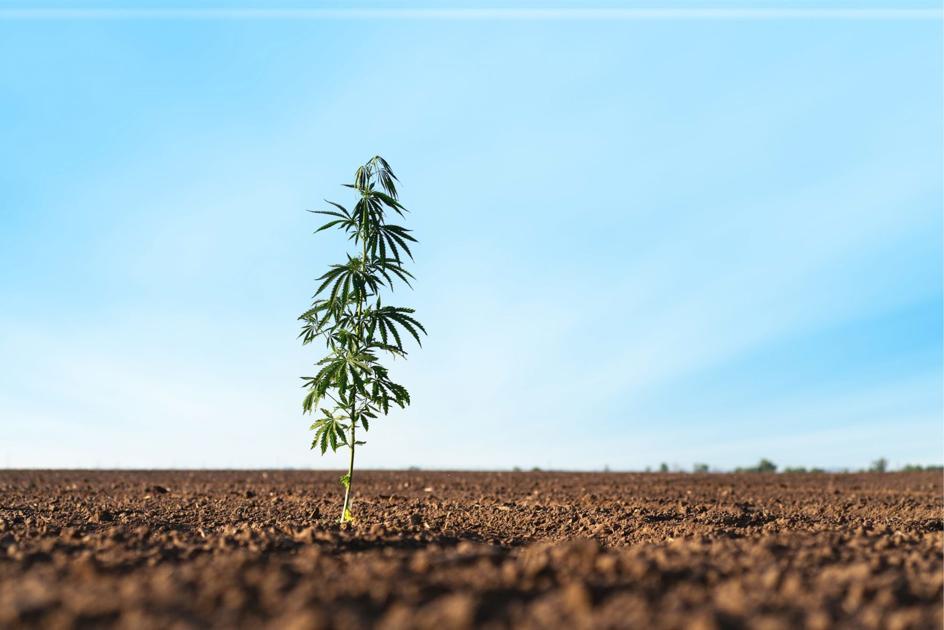 Farmers and drug-enforcement agents spent decades trying to rid Illinois fields of cannabis, considered both a noxious weed and an illegal plant.

But the star-shaped ‚Äúcannabis sativa‚ÄĚ is making the transition to commercial crop, now that the state has legalized hemp production and both medical and recreational marijuana use.

Just how easy is it to grow?

Cannabis can proliferate like a weed, but producing the THC-rich flowers favored by marijuana users can be ‚Äúvery challenging,‚ÄĚ according to Dan Linn, executive director of the Illinois chapter of the National Organization for the Reform of Marijuana Laws. ‚ÄúThere is a little bit of a learning curve to it.‚ÄĚ

Likewise, growing industrial hemp is ‚Äúnot rocket science, but it takes a lot of effort and time and commitment,‚ÄĚ said Andy Houston, a northwestern Illinois hemp producer and CEO of American Hemp Research. ‚ÄúIt‚Äôs a lot more labor-intensive than most conventional farming is around here.‚ÄĚ

First, a bit of science, and history.

Cannabis sativa includes both marijuana, which has ‚Äúpsychoactive properties,‚ÄĚ and hemp, which does not. They‚Äôre very similar plants, sort of the cannabis equivalent of field corn and sweet corn, bred for different reasons, said University of Illinois Extension educator and agronomist Phillip Alberti.

Hemp and marijuana look and smell the same, and are hard to differentiate, Alberti said.

The primary difference is the level of THC in the plant ‚ÄĒ tetrahydrocannabinol, a naturally occurring compound that provides the ‚Äúhigh‚ÄĚ users get by smoking or eating products with marijuana. If it‚Äôs more than 0.3 percent, it‚Äôs classified by the Illinois Department of Agriculture as marijuana.

Hemp plants have cannabidiol, or CBD, which is sold in gels, gummies, oils and supplements.

Both compounds can help alleviate pain and other conditions, but CBD doesn‚Äôt produce a ‚Äúhigh.‚ÄĚ

Hemp is also used as a fiber for cloth, paper, biodegradable plastics and other products.

During World War II, farmers were encouraged to grow hemp for fiber.

‚ÄúWe had fields and fields of hemp fiber out here,‚ÄĚ Alberti said.

The government later prohibited growing cannabis in any form, but Illinois still has lots of hemp plants in fields and ditches that adapted to grow in sandy or rocky soil.

However, they aren‚Äôt the same plants that farmers will grow for marijuana or CBD hemp, he said.

Those wild leftovers from World War II were later classified as noxious weeds because they grow quickly and can be tough for farmers to eradicate, he said.

The 2018 farm bill again legalized hemp production, and this spring Illinois finalized rules for growers. Interest was high: the state issued 500 licenses to Illinois farmers to start producing the first crop this year.

‚ÄúFor a new crop with this much investment, it‚Äôs pretty interesting,‚ÄĚ Alberti said.

In June, it became the 11th state to legalize recreational marijuana use by adults, effective Jan. 1, 2020.

‚ÄúCraft growers‚ÄĚ will eventually be able to apply for licenses to grow up to 5,000 square feet, though rules are still being developed.

Lawmakers removed a provision that would have allowed any adult to grow up to five plants at home. Instead, that will be legal only for patients approved to use marijuana for medical purposes ‚ÄĒ about 65,000 statewide as of this spring.

Law enforcement expressed concerns that the homegrown provision would make it difficult to find illegal growers. Linn expects the state to eventually allow all adults to grow marijuana, as other states have done.

Both crops usually get their start in greenhouses, which provide a much better environment for the seedlings. About 70 to 80 percent of hemp seedlings will germinate in a greenhouse, compared to 40 to 50 percent in a field, Alberti said.

‚ÄúThey‚Äôre small. They don‚Äôt really have an ability to pop up through the soil,‚ÄĚ especially in heavy rains, he said.

Lighting is also critical. Like soybeans, cannabis plants begin to flower after the summer solstice, as the days start to grow shorter. Indoor growers have to simulate a natural environment, Alberti said.

Hemp production, he said, is more akin to growing vegetables such as corn or potatoes rather than corn or soybeans, as it‚Äôs a ‚Äúspecialty crop.‚ÄĚ

The seedlings are transplanted to a field after several weeks. It‚Äôs helpful to have a tractor and a transplanter, which digs evenly spaced holes and drops the seedlings into the ground, he said. Some operators also use a row-builder, which shapes the ground into a raised bed and lays plastic or mulch over it to keep out weeds, he said.

Those investments may not be needed for smaller plots, but the crop is labor-intensive, he said.

‚ÄúWhat you will need is manpower,‚ÄĚ Alberti said. ‚ÄúIf you don‚Äôt have the equipment to do this, you‚Äôre doing this all by hand. You can be profitable on a small acreage. If you‚Äôre going to do it, take time to investigate it.‚ÄĚ

Most marijuana plants are grown indoors in a controlled greenhouse environment, Linn said. Outside, the plants can get pollinated by wild hemp growing along railroad tracks or ditches, prompting the female plants to put their energy into seed production rather than the valuable flowers with higher THC content, he said.

Illinois law also requires all medical marijuana patients to grow their plants in a locked indoor facility, he said.

Often, growers use cuttings from other plants, to ensure the genetic makeup, but it can also be grown from seed, Linn said. Growers have to learn how to identify and remove the male plants to prevent pollination, he said.

Where to grow? Everywhere

Building an indoor closet to grow five plants can be done for about $200, though you could spend a few thousand dollars on advanced thermostats, automated fans and watering systems, Linn said.

Marijuana can be grown year-round indoors, with climate and light controls ‚ÄĒ up to four harvests a year, he said.

Besides the cost of the equipment, hemp and marijuana plants need to be tended daily, Houston said.

‚ÄúIt‚Äôs not something you can put a seed in the pot and put some water on it and walk away from it,‚ÄĚ he said.

Pests are another issue ‚ÄĒ spider mites and a fungus that causes bud mold or bud rot because of the high humidity in greenhouses, Linn said.

‚ÄúObviously, there are large-scale underground networks of growers that have been prolific for decades of cannabis prohibition,‚ÄĚ he said.

Someone trying it for the first time ‚Äúmay not get an end product that is very good,‚ÄĚ Linn said, ‚Äúbut over time they can learn from it.‚ÄĚ There are also helpful books and online videos, he said.

The cannabis plant isn‚Äôt native to Illinois, or even North America, thought to have originated thousands of years ago in Asia.

Alberti said it will take time to determine which parts of the state are best-suited for growing and develop varieties bred for Illinois. Cannabis developed for Colorado, Oregon, California, Canada or Europe is suited to slightly different climates, although it may grow well here, too, he said.

Linn said it‚Äôs possible to grow marijuana in ‚Äúevery corner of the state.‚ÄĚ

‚ÄúThere are excellent cannabis growers in southern Illinois, in the Shawnee National Forest. Also in Iroquois County, Galena and Freeport, just about everywhere in the state,‚ÄĚ he said.

Houston, who grows corn and soybeans as well as CBD hemp on about 2,300 acres near Roseville, in Warren County, consulted with Colorado growers when he was starting his hemp operation.

He had tried unsuccessfully to win a state license to grow medical marijuana in 2014 but landed a dispensary license. He‚Äôs been selling medical marijuana since 2015 at Salveo Health and Wellness (Latin for ‚Äúbe well‚ÄĚ) in Canton, which he co-owns, buying from licensed growers in Illinois.

He saw how CBD oil was helping his customers and met a Colorado grower who had switched to CBD hemp.

He started looking into how he could legally grow hemp in Illinois and connected with a Western Illinois University researcher who specializes in alternative crops. They won state approval to grow hemp as a small research crop last year.

Houston said he focused on harvesting seeds, knowing they would be in high demand this year.

‚ÄúThe yields we got were a lot higher than what they usually got out in Colorado,‚ÄĚ he said. ‚ÄúThey don‚Äôt have the soil types we‚Äôve got here in Illinois.‚ÄĚ

He was allowed to start growing hemp commercially this year and now cultivates about 17 acres ‚ÄĒ 15 for commercial use and two devoted to crop research.

For the commercial plots, he started seedlings in the greenhouse and transplanted them after three or four weeks, using plastic to keep weeds down and irrigation drip lines for watering.

In the research plot, he planted seeds directly into the soil and isn‚Äôt using irrigation, as a test comparison. He‚Äôs also experimenting with different tilling practices.

The wet spring caused delays, but the plants look good and the direct seeding appeared to work well, he said.

He‚Äôs working with other first-time growers and has already learned one thing: The transplants need lots of water for the first week or 10 days to get roots established. One nearby farmer‚Äôs plants started to fail after a few days, as summer rains dried up, so he set up a mobile water tank on a hayrack, he said.

Houston is thankful he didn‚Äôt plant more than 15 acres to start, given the work involved. But he hopes he can expand next year, and thinks the popularity of CBD hemp and marijuana will only grow. He‚Äôs already had some processors contact him.

‚ÄúIf you can master the skill of growing cannabis, it‚Äôs going to pay dividends for years on out,‚ÄĚ he said.

‚ÄúI think it‚Äôs going to work all across Illinois. If you work at it, and you‚Äôre pretty diligent, you‚Äôre going to get a very good profit return in product.‚ÄĚ